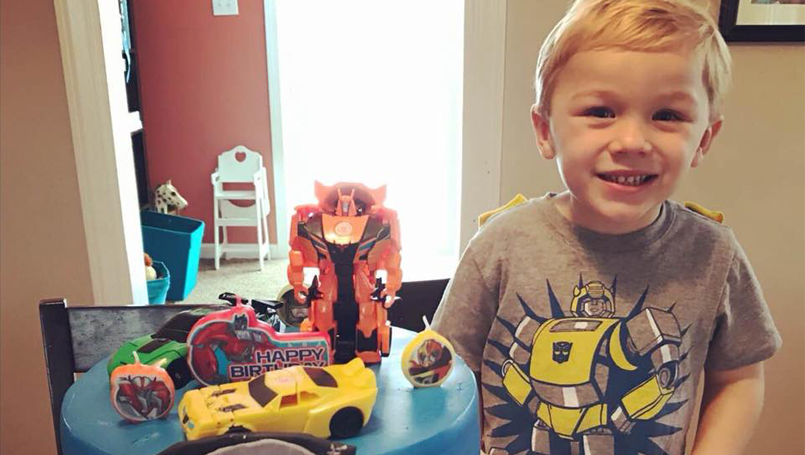 Like Bumblebee, Hudson is small in stature, but large in bravery, kindness and inspiration.

Hudson Brown, 5, of Grosse Pointe Farms, is like lots of kids his age: he’s passionate about Legos, T-ball, family and his favorite toy - Bumblebee, a Transformers robot.

Unlike most 5 year olds: he was diagnosed with a large brain tumor in January.

Unbeknownst to Hudson, one of the Transformers actors, Mark Wahlberg, would reach out to offer his support and prayers.

Like the super power of Transformers, his parents and doctors turned to a medical super power – protons, to destroy his cancer cells. Patrick and Megan Brown felt blessed.

What began as a trip to the ER at a major Detroit hospital for a debilitating headache, quickly became a cancer diagnosis. “The news hit us like a truck. It’s your worst nightmare. We know we had to do whatever we can to give Hudson the best chance,” explained Megan, his mother.

Doctors ordered a CT and MRI. They found a large tumor on the back of Hudson’s brain. The following day, surgeons removed most of the tumor. A biopsy confirmed cancer – medulloblastoma. The next nine days Hudson was in a pediatric intensive care unit. His pediatric oncologist encouraged the Browns to seek proton therapy at Beaumont. After hearing about the benefits of proton therapy, the Browns contacted doctors at the center in Royal Oak.

Proton therapy uses positively charged atomic particles, traveling up to two-thirds the speed of light, to fight cancer. A cyclotron, or particle accelerator, creates protons from hydrogen molecules. The therapy is a high-tech alternative to X-ray radiation. Compared to X-ray beams, which pass through a patient, proton beams deliver targeted radiation to the tumor and then stop, resulting in no exit dose.

Peter Chen, M.D., Hudson’s radiation oncologist at Beaumont explained, “For children, those most vulnerable and susceptible to the damage of traditional radiation, proton therapy offers greater precision to destroy cancer cells, sparing nearby healthy tissue from harmful radiation, with fewer side effects.”

Megan said, “Hudson was the first cranial-spinal patient at Beaumont’s Proton Therapy Center. We feel so blessed. We did not have to travel to Chicago or Boston for this high-tech treatment. It’s only 30 minutes from home. We’re so lucky, if this happened one year ago, we’d have to relocate our family for six weeks.”

Like Bumblebee the autobot, Hudson is small in stature, but his parents refer to his big heart. “He’s a sweet kid who thinks of others first. Hudson can be silly,” said his father, Patrick. “He likes to tell jokes and make other people laugh. His motivation is to get home and have fun with family and friends.”

Both of his parents are elementary school teachers in Grosse Pointe, although Megan took a leave of absence from her classroom after his diagnosis. “He is in pre-kindergarten. He loves his classes and teachers. One of his obsessions is Legos.”

Hudson is the middle child, with a younger sister, Cecelia, 2 and older sister, Emmy, 7.

Hudson received 30 proton treatments, Monday through Friday, for six weeks. Each day, they’d leave their home at 7:45 a.m. Admitted Megan, “Sometimes it was a struggle to get him to Beaumont each morning.” He was not allowed to eat breakfast before his treatments.

The first couple days of treatment were the most challenging. “Hudson didn’t know what to expect. But, each day got easier,” said Megan. “The nurses, doctors, technicians, staff and volunteers were amazing. They did everything possible to make it easy for him – playing music he likes, letting him pick the colors in the treatment room and then, there’s Maddie the therapy dog.”

During the first week, Hudson was introduced to Maddie. They bonded. Later, in the anesthesia room, the dog climbed in bed with him. It was so calming for him.

After seeing how Hudson reacted to Maddie, her trainer, Carla Grava, brought the dog to every treatment.

Said Megan, “From the time we arrive, Maddie doesn’t leave his side. The dog is even present when he wakes up from his sleepy medicine.”

Hudson’s treatment plan includes proton therapy and chemotherapy. Dr. Chen explained, “Hudson has a tumor of the cerebellum, the back part of the brain, which affects his balance. It’s called medulloblastoma. These types of cancerous tumors have a tendency to spread through cerebral spinal fluid, putting the entire spine at risk for the spread of cancer.”

By using proton beam technology, Dr. Chen and the team treated Hudson’s brain and spine. Because there is no exit dose with protons, no harmful radiation was delivered to his mouth, neck, chest, abdomen or pelvis – sparing vital organs such as the heart.

“It’s been an amazing gift to have the Proton Therapy Center so close. Everyone there has been positive, patient, upbeat and kind,” said Patrick. “We’ve also been incredibly blessed –   community, neighbors, family, school staff – all have been so supportive.” Friends even created a Facebook page, “#HudsyStrong.”

Bumblebee and other surprises

With Hudson wrapping up his proton treatments the second week of April, Megan got to thinking how they should celebrate his milestone. With his love of Transformers movies, and Bumblebee, she had an idea, “It just hit me. I should get a yellow car, his Bumblebee, to drive him to his end-of-treatment celebration at the Proton Therapy Center.”

People in her network gladly helped, turning her idea into reality. A yellow and black Challenger, along with a caravan of Camaros from the Motor City Camaro Club, drove him and his family to Beaumont where he rang the end-of-proton-treatment bell.

And when Transformers actor Mark Wahlberg heard of Hudson’s celebration, he wanted to help and made sure he and his party guests enjoyed his favorite food: hamburgers, courtesy of Wahlburgers in Detroit. Along with the food, Mark created a short video message for Hudson and mentioned how he looks forward to meeting him.

While Hudson has completed his proton treatments at Beaumont, in May, he begins more chemotherapy.

Said Megan, “Our doctors are fairly confident with the proton and chemo therapies, Hudson should have a great prognosis. Their optimism keeps us going.”

Patrick said Hudson has an affinity for “Fight Song” by Rachel Platten, “The one day we drove to his proton treatment, he sang it five times. We talk about not giving up, and when you have fight in you, that means you’re strong – even when things are hard.”

The song’s lyrics are Hudson’s favorite, “Like a small boat on the ocean, sending big waves into motion … know I’ve still got a lot of fight left in me.”

Mark Wahlberg shares a message of hope with Hudson

Dip It For Kids at Dairy Queen on March 21

In addition to Free Cone Day, Dairy Queen's Dip It For Kids campaign will help raise additional funds for Beaumont ...