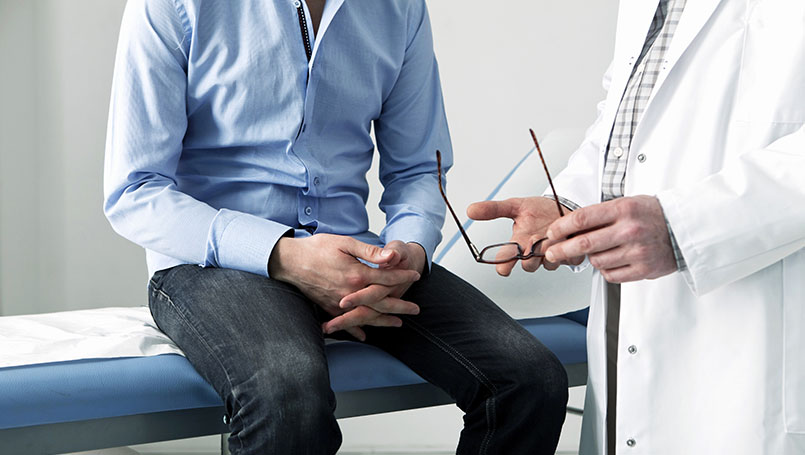 Dr. Gregory McIntosh, a urologist at Beaumont, Farmington Hills discusses the changes in preventive screenings and testing for prostate cancer.

From the mid-1990s to the mid-2010s, the risk of dying from prostate cancer dropped 50%, due in part to widespread testing, which helps detect cancer in its earlier stages.

Yet, in 2012, the United States Preventive Services Task Force recommended against routine PSA screening for all men due to concerns the testing was leading to men being over-screened and those with low-risk forms of the cancer being overtreated for the disease.

“We went through the concerns of are we over-screening,” says Dr. Gregory McIntosh, a urologist at Beaumont Hospital, Farmington Hills. “But screening is used to differentiate high-risk and low-risk patients. If you don’t screen and you wait until there are symptoms with prostate cancer, you have bad outcomes.”

In 2018, the USPSTF again changed it's guidelines, recommending that men ages 55 to 69 years have a conversation with their doctors about harms and benefits of PSA screening - something referred to as “informed decision making” — before making a decision, and recommending men ages 70 and older not get PSA testing.

McIntosh says he and many urologists and oncologists have recommendations closer to those of the American Cancer Society: Men at average risk have a conversation with their doctors about getting a baseline digital rectal exam, or DRE, and PSA test around age 50; and age 40 for Black men, who have a higher risk of prostate cancer, or men at high risk due to family history.

McIntosh points out that prostate cancer is the second-leading cause of cancer deaths among men. It also typically has no symptoms in the early stages, making screenings the best way to catch the disease while it’s still localized and hasn’t spread outside of the prostate.

“If the cancer is advanced, non-localized or distant, your options are limited,” he adds.

And, while years ago patients with low-grade cancers may have been overtreated, that doesn’t hold true today, according to McIntosh. “Now we know not everyone requires treatment immediately and with genomics we have gotten better at deciding what treatments are best,” he adds.

New advances have also improved the way prostate cancer is found and treated. Molecular testing, which is more specific than PSA testing and helps doctors better determine if a patient’s cancer is likely to progress, and MRI-guided biopsies, which can look for cancer in areas missed by traditional biopsies, have been successful in detecting "clinically significant cancer" while limiting over-detection, according to a recent study published in the medical journal Lancet Oncology.

"These sites provide significant data and information that patients can access. There are resources that can help you decide if you want to get checked,” he says.