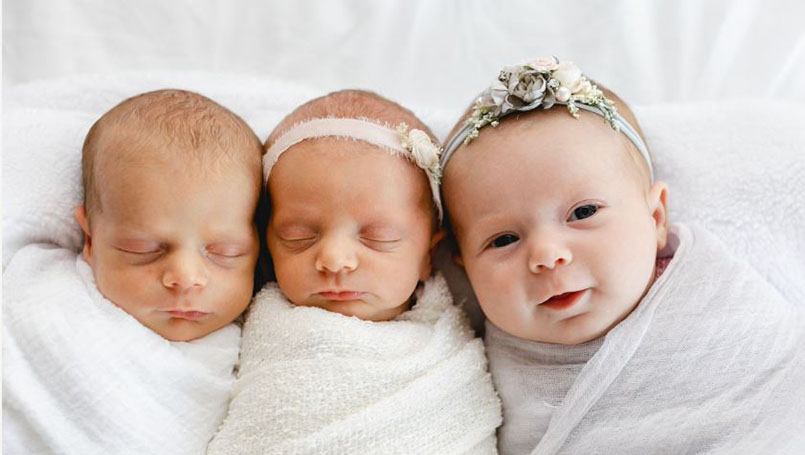 When Katie and Mario purchased their first home, they selected a multi-level, six-bedroom home and joked about how they wanted to fill each room with a future Talerico.

One plus one equals eight

Katie Talerico always knew she wanted to be a mom. At just 4 years old, she referred to her little sister as “My Baby” and spent many happy hours pushing her in a stroller, even though they were just 19 months apart.

When she and her husband, Mario, purchased their first home, they selected a multi-level, six-bedroom home and joked about how they wanted to fill each room with a future Talerico.

And in 2018, three months after a fairytale wedding in Scotland, the pair started the paperwork to become foster parents.

“We always knew, no matter what, foster parenting was a part of our master plan,” Katie said.

So, it was no surprise to close family and friends when Katie and Mario announced they had gone from a family of two, just two years ago, to a family of eight this past spring.

“It’s such a relief to finally have our family,” Katie said. “We’re still pinching ourselves that it’s real.”

“After what we’ve been through, to come out on the other end just means so much,” Mario said.

In the summer of 2020, Katie and Mario became foster parents to two biological brothers, now age 3 and 2; their baby sister, now 1 years old, joined them in the spring of 2021. The couple is hopeful the trio’s adoption will be final sometime this fall. 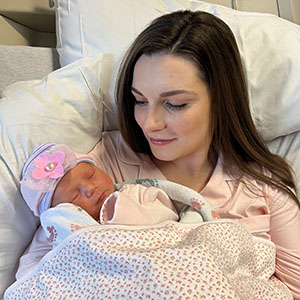 But, Katie and Mario weren’t finished yet.

On May 19, close family friend and gestational carrier, Kaylyn Lopiccola, naturally delivered twins, Michael James and Charlotte Lyn, four weeks early at Beaumont Hospital, Troy. The twins were also conceived via IVF, with both Katie and Mario on hand to support Kaylyn and welcome them into the world.

“It’s not something that happens every day, but for us it was so natural and absolutely made sense,” Lopiccola said. “Katie and I have been best friends since childhood. We’re together for holidays and family gatherings. She and Mario were already like family. I told her back in 2019: my body was made to carry babies. I’m here for you if you need me.”

The way, way back

Katie and Mario’s challenge to have children dates back to 2006, when at just 14 years old, Katie, now 30, was one of three survivors of a small plane crash that took the life of her father, as they were flying home from their family cottage in northern Michigan Dec. 31.

When rescuers found their downed aircraft, they observed that her father, Michael, had thrown his body on top of Katie, to shield her from as much of the impact as possible.

Katie’s pelvis was shattered, and both arms, legs, knees, three toes and right ankle were broken.

But she was alive.

Katie vividly recalls her Beaumont orthopedist saying: ‘I swept out your pelvis and built you a new one.’

“During recovery, I lost so much weight and all my muscle; my hormones were absolutely rattled,” Katie said. “They compared my condition to someone battling anorexia. It took several years and different medications for me to finally get my (menstrual) cycle back.”

She took that winter semester off school, but spent the summer in intense physical therapy, driver’s training and catching up with a tutor to graduate with her class and return to normalcy as quickly as possible.

“They told me I had all the parts to make a baby, but would probably have to deliver by C-section,” Katie said. “I was always worried about conceiving and carrying just because of everything I went through.”

Flash forward to 2019, when Katie’s concerns seemed to becoming reality. After several failed pregnancies, she and Mario sought the support of Dr. Mersol-Barg.

“The Talericos are poster people for not giving up,” Dr. Mersol-Barg said. “They knew struggle and loss. But their intention was firm: ‘We want to bring people into this family to be good world citizens’.”

Katie and Mario’s first several attempts at IVF were unsuccessful. But in July of 2021, they got pregnant via IVF once again. Katie was told, however, her chances of successfully bringing the baby to term were slim.

“I bled early on and throughout the pregnancy,” Katie recalled. “I was cramping and passing blood clots and clumps of tissue. My HCG levels weren’t doubling like they were supposed to.

I thought for sure I was having another miscarriage. Everybody kept saying: ‘It’s going to happen soon.’ But each time I went to the doctor, the heartbeat was still there.”

By this time, she and Mario had launched adoption proceedings for their three foster children.

Coincidentally, timing was also optimum for Lopiccola to carry Katie and Mario’s baby. 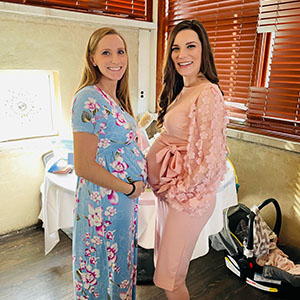 “I would never ask Kaylyn to carry twice for us,” Katie said. “And we knew we wanted our child to have at least one sibling.”

According to Dr. Mersol-Barg: “Normally I recommend carrying one baby at a time, one is the safest,” he said. “But circumstances were extenuating. Kaylyn was healthy and did very well with her own first two pregnancies. We all felt good about her carrying twins.”

And so, Kaylyn was also implanted with two of Katie and Mario’s fertilized eggs. “Everything went well right from the beginning,” Lopiccola, said. “I didn’t have any morning sickness or mood swings. I delivered them after just 10 hours of labor – less than my own – and they were born just seven minutes apart.”

Dr. Mersol-Barg said he hopes the Talericos’ story gives hope to other couples looking to give birth via gestational carrier.

“There’s a misconception that this is not possible in Michigan,” Dr. Mersol-Barg said. “It’s tougher. But it can be done. It’s important for couples to get sound medical and legal counsel because there are bumps and barriers along the way. But for women who cannot carry a baby themselves, a gestational carrier is a viable option.”

So how has life changed for Katie and Mario since their family grew from five to eight in the last few months?

The Talericos upgraded their multi-level home in Grosse Pointe Park to a spacious, open-concept ranch in Macomb County where they can spread out but still keep a close eye on all the kiddos.

Their new home also includes a second washer and dryer. And instead of traveling in two separate vehicles, a 12-seat Mercedes Sprinter, currently on back-order due to supply chain issues will hopefully arrive this fall.

Currently, Lopicola and Katie are both pumping breast milk. Should that come to an end, the family will need to purchase 27 cans of formula each month; Katie currently has about 50 cans on standby if and when that time rolls around.


And with six in diapers, the Talerico crew blitzes through about 326 a week.

But focusing on the long days and sleepless nights is not in Katie and Mario’s nature; they know these challenges are temporary.

“The big thing I want other parents to know is: ‘Always have faith: miracles do happen,”’ Katie said. “If we can help just one other family struggling the way we did by sharing what helped us achieve the most beautiful gift in the world, it’s worth telling our story.”

What science knows - and doesn’t know - about miscarriages

Roughly a quarter of all women experience a miscarriage during the lifetimes.

How Your Partner can Support Breastfeeding

Support people can provide a secondary comfort outside of breastfeeding.

“I had already made my peace with God that I was older, and I might not be able to conceive,” said Wells, now 36, o...