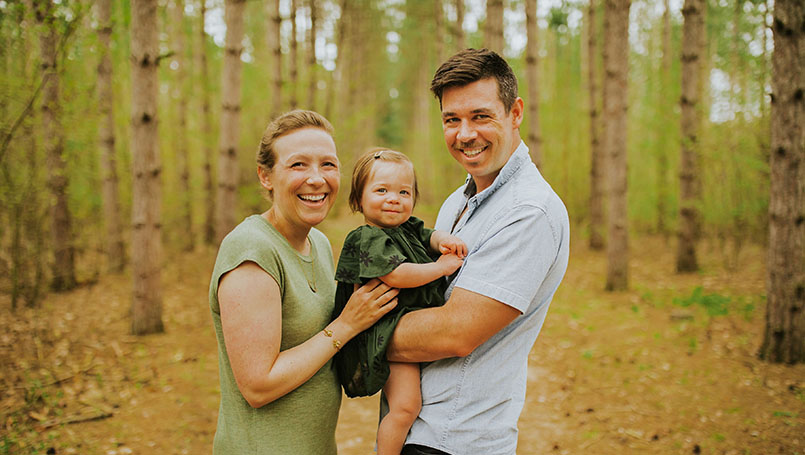 Ellen Rabideau gave birth to her daughter Tatum on Mother’s Day, May 9, 2021, at Corewell Health William Beaumont University Hospital in Royal Oak. Just eight weeks postpartum, Rabideau returned to the same hospital, but this time for a not-so-joyous occasion: doctors told her she had breast cancer.

Just eight weeks postpartum, Rabideau returned to the same hospital, but this time for a not-so-joyous occasion: doctors told her she had breast cancer.

Rabideau said she tried breastfeeding Tatum, but her little girl refused to latch to her right breast.

“I thought I had developed mastitis or some type of infection,” Rabideau said. “But at my six-week follow up with my gynecologist, he said, ‘That doesn’t look right. I’m going to send you for an ultrasound to make sure there’s not an abscess in there.’”

“I think I was equal parts stunned and terrified,” Rabideau said. “I had an 8-week-old baby. They told me stage 3, a highly aggressive form, so I’m thinking to myself, ‘I’m probably going to die and leave a newborn for my husband to have to raise all on his own.’”

Breast cancer has been a part of Rabideau’s life for as long as she can remember. Two of her maternal aunts died when they were in their late 30s and early 40s from breast cancer, and her mom had preventative surgery at age 45.

At 18, Rabideau discovered, like her mom and seven of her nine cousins, she also carried the BRCA gene, meaning cells are more likely to divide and change rapidly, leading to breast cancer.

“For the last 12 years, I’ve received routine mammograms and MRIs every 6 months,” Rabideau said. “In February, I had a clean mammogram. But by July, just four months later, I had already developed an aggressive form of breast cancer.”

My daughter saved my life

Not only did Rabideau’s daughter refuse to latch to her right breast, but she arrived three weeks early. 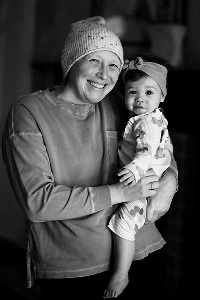 “I’m not a very spiritual person, but I truly believe that Tatum knew something was wrong,” Rabideau said.

Rabideau’s doctors believe her cancer was probably growing at the time she gave birth, and she thinks Tatum came early so she could get diagnosed sooner.

“I know it kind of sounds crazy, but I have to believe she did that for me,” Rabideau said. “It’s the only way I can make peace with it to some extent. Yes, the doctors did the treatments to save my life, but truly Tatum is the one who saved my life.”

“After chemotherapy, it would be like five days before I could truly take care of my daughter again,”

Rabideau recalled. “To not be the primary caregiver of your child, especially when they are that young, is not a comfortable feeling, and it was very difficult.”

Following five months of chemotherapy, Rabideau started an immunotherapy drug and then had surgery in January 2022. She had a bilateral mastectomy, where both of her breasts were removed at the same time, followed by a lymphovenous bypass to prevent lymphedema or arm swelling.

Rabideau then started proton therapy treatment in February 2022 at the Beaumont Proton Therapy Center. The center is the first of its kind in Michigan and is now celebrating five years of providing lifesaving treatment, helping more than 800 children and adults fight cancer.

“There are not many places where you can receive proton therapy in the country, so I was so grateful to have one right next door at Royal Oak,” she added.

The proton therapy beam offered greater precision to destroy cancerous cells, sparing adjacent healthy tissue with fewer side effects. In this case, Rabideau said the cancer was close to her sternum, so it was key to help avoid issues with her lungs.

Rabideau is currently in remission but takes a medication specific to BRCA patients to help decrease the risk of reoccurrence.

“That whole time I was fighting cancer, I was thinking to myself, ‘I may be absent now, but if I don’t do this, then I’m absolutely not going to be able to be there for Tatum for the rest of her life,” Rabideau said.

The exception, the hope

“I don’t think she knows how much I needed those words of hope in that moment and for my entire extended family what my survival has meant,” Rabideau recalled. “It’s just beyond words. My team of doctors empowered me and advocated for me more than I could’ve ever imagined.

This Breast Cancer Awareness Month, Rabideau is reflecting on how far we have come in the past 20 years in terms of science and breast cancer research.

Precision medicine now allows doctors to pre-emptively help patients with genetic mutations that can lead to specific cancers. Some families have different predispositions of cancer, and patients need to look back up to three generations on both the mother’s and the father’s side. Genetic testing can discover patients with specific mutations that leave them susceptible, so screenings can be started earlier to catch cancer sooner, when it is more treatable. The medical team can then determine the appropriate treatment approach for the best outcome, based on clinical data, rather than a generic treatment plan.

“It’s just amazing to me that I get to live after the same disease killed my aunts,” Rabideau said.

“Ellen’s story is a great example of the progress we’ve made in genetic testing and novel targeted therapy, and how it impacts families with genetic risk,” Dr. Dana Zakalik, an oncologist at Corewell Health William Beaumont University Hospital said. “I took care of her aunts who had breast cancer, before we had this knowledge available. Ellen’s success story nicely illustrates the hope and promise and great improvements in precision oncology.”

As for Rabideau – her hope is that in another 20 years from now, things will be even better.

“We don’t know yet if Tatum will have the BRCA gene,” she said. “But my hope is that 20 years from now, if something were to happen to her, at least I have the peace knowing she will probably be OK, too. These advances and possibilities are just incredible and everchanging. We need to continue to support the organizations that are focused on research because truly that’s the way we’re going to save more lives.”

If you have a family history of cancer, talk to your doctor and consider having genetic testing done at a medical facility. Click here to learn more about genetic counseling or to schedule an appointment.

“I had already made my peace with God that I was older, and I might not be able to conceive,” said Wells, now 36, o...