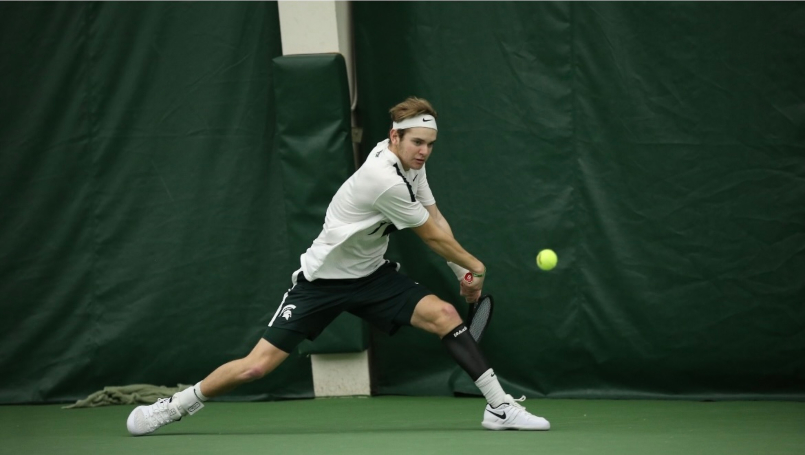 Big Ten, All American status potentially on the horizon

At just 3-years-old Jack Winkler could rally a tennis ball all the way across the court. At 8, he made the tough decision to give up travel hockey and basketball to focus on tennis. And as a senior at Brother Rice High School in Birmingham, he was recruited to play for the Michigan State Spartans.

What could go wrong?

Plenty, it turns out.

Jack’s game lulled throughout his freshman year, 2017-2018, culminating in a mid-tournament visit to the emergency room, triggered by severe pain and rectal bleeding. The scare resulted in a diagnosis of ulcerative colitis, or UC, which essentially translates to ‘inflamed colon.’

Throughout that year, his energy, weight and appetite dipped and fluctuated. But with diagnosis and treatment, medication and diet, he was able to get back in the swing.

The following year, as a sophomore, Jack earned the No. 1 position on his team and a national ranking.

Healthwise, things were not progressing so well.

By Oct 5, 2019, just a few weeks into his junior year, severely anemic and 60 pounds underweight, Jack found himself in a hospital bed at Beaumont Hospital, Royal Oak with compound complications of UC. All told he spent 47 days at Royal Oak that fall, battling infections, dehydration, pneumonia, high blood pressure and severe pain.

Suddenly the athlete who waved off painkillers in order to comply with National Collegiate Athletic Association rules was begging for relief.

“He was so weak and the pain was excruciating. The bells and alarms were going off constantly,” said Jack’s mom, Kelly Winkler, who rubbed his feet for hours and dashed home occasionally to make his favorite, chicken pasta dinner in hopes of sparking his appetite.

“I was so scared. He had a fever and pneumonia and everything started to fail. I asked our pastor to come and anoint him,” she added. “We realized we could lose him.”

During the night, Jack’s medical team determined his colon was perforating.

“If we didn’t operate immediately, the contents of his colon would spill into his body and he would die,” explained his physician, Dr. Claire Peeples, colon and rectal surgeon, Beaumont, Royal Oak.

Surgery was scheduled for first thing that morning.

Jack and Kelly also opted to take the first step toward creating a J-pouch for Jack. This procedure involves a series of surgeries to temporarily reroute the colon and create an abdominal opening which the patient uses to eliminate waste, giving the colon 3 to 6 months to heal and rest.

“There’s a lot to get used to with having a J-pouch,” Dr. Peeples explained. “You have to hold liquid stool and there’s a constant sense of urgency. Activity increases the sensation. You have to learn when to go to the bathroom and when not to. It wakes you up in the middle of the night which makes it hard to ever get good sleep.

Patients must follow strict bathroom routines before going to bed and exercising, and in Jack’s case, before every practice and match.

On the flipside, for patients who don’t opt for a J-pouch, the only other option is a permanent ostomy.

“Which is not a fun thing to live with the rest of your life,” Dr. Peeples said. “Still, some people go straight for the ostomy.”

Fortunately for Jack, his luck was finally turning. The surgery and J-pouch construction were successful. The pain receded, color flooded back into his face and his appetite, weight, muscle and energy slowly returned.

He still had to learn how to sit up again and walk.

But throughout it all, Dr. Peeples remembers Jack never stopped asking: “’When can I get back to tennis?’”

He began by hitting the ball around his living room, then his backyard and eventually lifting weights.

“I remember he started coming back to practice around January and even December,” Coach Orlando recalled. “He could barely walk. He shuffled.”

According to Kelly, Jack developed a pre-practice bathroom regiment that included using Imodium to slow down his digestion and intermittent fasting, particularly on match days.

“When he did practice, he was totally depleted,” Kelly said. “I thought - ‘Well, maybe he could play doubles. Less time on the court.’ I never thought he would come back to play at this level.”

Fast forward to September, 2021, the fall of his senior year. With several surgeries, new medications, and a new diagnosis of Crohn’s Disease under his belt, Jack was finally ready to hit the court again.

Although he still had an additional year of eligibility, Jack made the tough decision that the 2021-22.

“It had become too hard on his body,” Kelly explained.

He would make the most of it.

He spent hours running “to get my lungs back under me”. He won his first individual match in September and suddenly it seemed like all the hard work might begin to pay off.

I’m much more grateful now for things I might have taken for granted. I’m playing better than I ever thought I could play.

Prior to his comeback, Coach Orlando said, Jack remained devoted to his team, attending practices, cheering on fellow players, serving as a volunteer assistant and coaching matches.

“Throughout those 2.5 years, in his deepest, darkest moments, Jack kept his mind in the game,” Coach Orlando said. “We also tried to give him something to hope for. Although at times it didn’t seem like there was very much to hope for.”

“Honestly, my biggest hope for him was that he would be a strong line up player,” Coach Orlando said.

Instead, Jack’s strength and momentum escalated steadily and he has since recaptured the No. 1 position on his team. 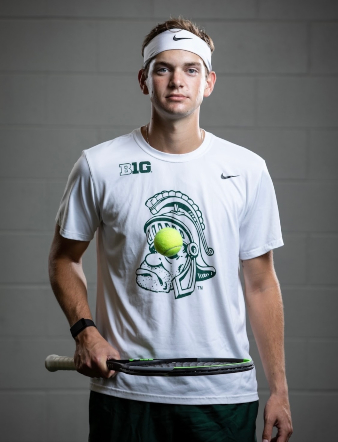 “It wasn’t handed to him,” Coach Orlando said. “It was one surgery and complication after another and here he is, beating two nationally ranked players this season. He earned it.

“After all the setbacks and what this disease did to his body, it really is shocking to see how far he’s come,” Coach Orlando added. “I don’t think he’d be here without having faith in his teammates and their faith in him.”

For Jack, who’s planning a trip to Europe and the Acropolis this summer and looking forward to “seeing things I’ve never seen before” it’s all icing on the cake.

“I’m much more grateful now for things I might have taken for granted,” Jack said. “I’m playing better than I ever thought I could play.”

Heading into the Big Ten season this weekend at home against Wisconsin, he still has plenty of tennis in front of him.

It will definitely be worth the ride.