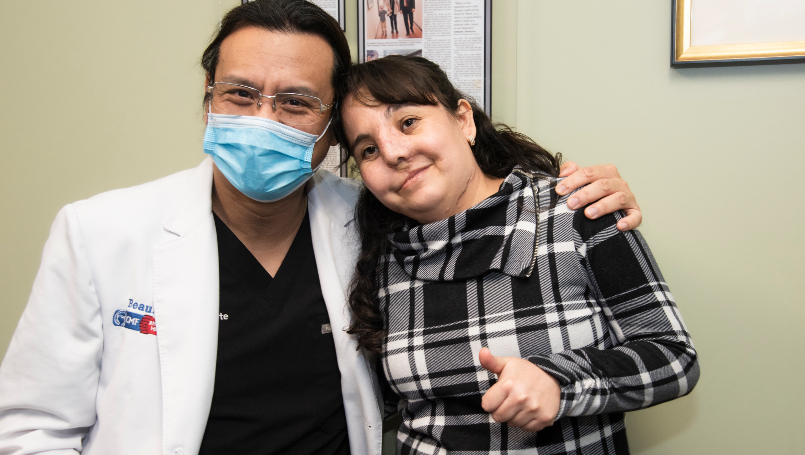 Hortencia’s health problems began when she was 16. She remembers covering the hole on her nose with tape so her classmates would not make fun of her.

It started with a small pimple near her nose. But over time, it did not heal. In fact, what Hortencia Reyes Sanchez believed to be a pimple began changing colors and became very painful. Then, she experienced a nasal perforation, or hole. Later, she developed a hole in the roof of her mouth, too.

For doctors in Hortencia’s home nation of Guatemala, it became a medical mystery. And, for her, an odyssey spanning 15 years and thousands of miles to get specialized treatment in Michigan. The condition, later thought to be an aggressive fungal infection, badly damaged her nasal septum and palate and resulted in a lack of bones to the middle of her face.

Hortencia’s health problems began when she was 16. Before school, she remembers covering the hole on her nose with tape so her classmates would not make fun of her.

She recalled, “When I returned home at the end of the day, I would remove the tape and lots of pus would drain out. It was a very painful process.”

Her family did what they could to help her.

She said, “My parents, my family are of humble means, but they found a way to raise the money - selling land and some animals that they had – in order to be able to afford a doctor and to pay for medicine and examinations.”

Despite her pain and health challenges, Hortencia finished school.

“I would feel very sad about my constant suffering, with every day the same as before – without relief or improvement,” Hortencia said. “The doctors could not explain why it wouldn't heal. I continued with biopsies every so often. One day after I returned home from school, desperate from the pain, I took many pills because I just wanted to die and not suffer any more.”

In 2016, she sought out surgeons for reconstruction of her nose and palate. Every surgeon told her the surgery she required could only be done in the United States or Spain.

Her family helped her pay to request a visa from the U.S. embassy, but she was denied, not once, but twice.

Hortencia said, “As each day went by, I was more desperate, not wanting to continue fighting, but my family would not let me give up.

A surgeon told her there was nothing that could be done, and there were no more options.

She said, “I had sought help everywhere in Guatemala and I had been given no hope. I remember that day walking out of the surgeon's clinic and starting to cry. I texted my sister and told her that it was over. All that was left for me was to go home and wait for the day I die.”

But her sister encouraged Hortencia to not give up and that somehow, she would get to the United States and perhaps be helped there.

With the support of her siblings, she left Guatemala in September 2018 seeking treatment in the U.S. Her parents did not want her to make the trip north. They thought it was too dangerous. Hortencia’s journey was difficult and challenging, with unexpected twists and turns; however, she eventually arrived in Virginia.

She traveled to Virginia to live with her brother Santos. Through correspondence, she connected with Beaumont Health’s craniofacial specialist Dr. Kongkrit Chaiyasate, who is also medical director of the Ian Jackson Craniofacial Clinic. 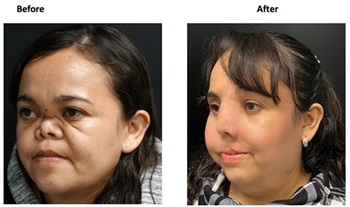 Dr. Chaiyasate agreed to help her. He and his team have assisted patients from around the world.

In 2019, Hortencia traveled to the clinic, in Royal Oak, Michigan, for her first appointment with Dr. Chaiyasate.

”A CT scan revealed an absence of the maxilla, palate, nasal septum, and nasal bone,” explained Dr. Chaiyasate. “Based on my physical examination and CT scans, it was determined she needed maxilla/alveolus reconstruction, palatal reconstruction, and composite nasal reconstruction. She had no bones in the middle of her face. I needed to come up with a solution to reconstruct those missing structures in just a few operations.”

Her first surgery took place in March 2019. At the onset of the surgeries, reconstruction went well. However, Dr. Chaiyasate discovered Hortencia has a connective tissue disease, a pre-existing condition, which makes microsurgery challenging. It was a long process, and then came the pandemic.

Dr. Chaiyasate took Hortencia’s own tissue, called micro flaps, from her forearm, leg, abdomen and forehead to reconstruct her face. Forearm tissue was used for her nasal lining and parts of her skull were used to construct her nose.

Despite some complications, Dr. Chaiyasate never quit. He was persistent.

He created an AV loop, which rerouted a new artery through her neck, ensuring she had good blood supply to her tissue graft.

Dr. Chaiyasate said, “She developed progressive flap necrosis, which I was not able to salvage. She was as disappointed as I. Due to her immigration status and potential lack of resources upon returning home, I decided to try one more time. This time, I created an AV loop protected with a Gore-Tex vascular graft. I let the loop mature for two months and then did the palate reconstruction. Fortunately, it was a success.”

Hortencia’s brother, Santos, moved to the Grand Rapids area, and has been her primary caregiver.

Nurse navigator Elena Turner, has also played a key role in Hortencia’s care. Fluent in Spanish, Turner encouraged her to find a hobby or interest that would not only keep her busy, but possibly earn some money. Hortencia now crochets flowers and sells them online. After tissue was taken from her forearm, the crocheting helped her regain her hand and finger movements.

Said Turner, “I know Hortencia is very grateful for the care we’ve provided. It was brave of her to make the long journey to the U.S. And over the past few years, we’ve seen her grow and mature. She has a positive outlook and I know she looks forward to going home.”

“Despite some obstacles, I am grateful to be able to help her. The case underscores the importance of her courage and perseverance. She’s undergone a complete transformation. It’s remarkable. Originally, Hortencia would not leave her home, had no will to live, did not socialize and had no hope. She’s grown as a person from this experience and is now looking forward to returning home to her family and a new life in Guatemala.”

“Dr. Chaiyasate, is, and will always be an angel that God sent to me,” Hortencia said. “I will never be able to pay or thank him enough for what he has done for me. He gave me hope for living again, he made it possible for happiness to return to my life and the life of my family.”