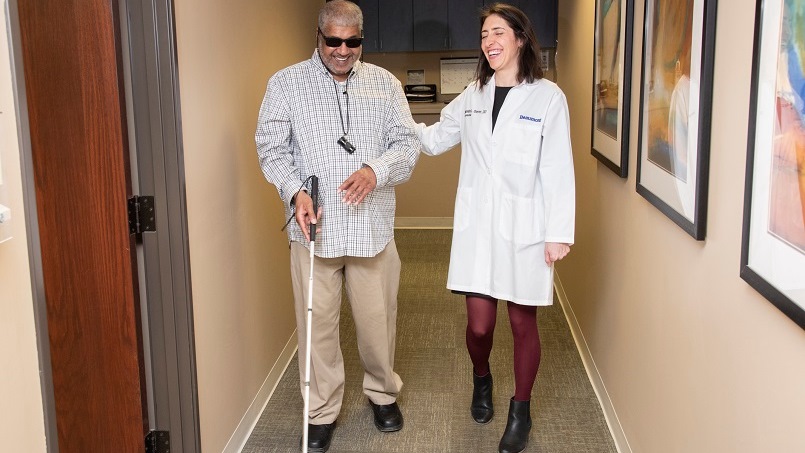 “I’ve got 12 grandkids, but it was the 8- and 10-year olds who worked me over about smoking,” Johnson admitted. “They didn’t want to come over anymore.”

He had tried to quit a couple of times before, but after 3-4 days, he was back at it. What got him to finally quit smoking for good wasn’t family, but rather the earnest way his primary care doctor approached him about kicking the habit.

Internist Jacqueline Gierer calls herself a practitioner of lifestyle medicine. She has always been more interested in getting her patients to make necessary lifestyle changes than in just prescribing “pills for ills.” Dr. Gierer believes most of her patients who smoke wish they didn’t.

She began by talking with Johnson to find out his health goals. She knew he might shut her out since patients do that sometimes when she talks to them about smoking cessation. Dr. Gierer understands a patient might need more time to develop a trusting relationship with her. With Johnson, she continued to ask about smoking in later office visits and reminded him that it’s her job to help him manage his health.

“Look, smoking significantly raises the risks for heart attack, stroke and several cancers. And smokers with diabetes are 30-40% more likely to suffer diabetic complications than nonsmokers. And, the more you smoke, the harder it is to control diabetes.”

“When Keith came in asking for my help, I knew he was ready to quit smoking for good,” she explained.

Johnson, who has diabetes, had already lost his eyesight to the disease: “Look, I’ve got a lot to live for. I want to do what I can to avoid any more health problems because that would just slow me down. I’ve got five grown kids and 12 grandkids to keep up with.”

“Dr. Jacqui wouldn’t give up on me,” he said. “Even when the nicotine patch and a medication to reduce my withdrawal symptoms and craving for nicotine didn’t work.”

When Johnson said he’d begun vaping to reduce the harm he was causing his body from smoking, Dr. Gierer explained how vaping is linked to chronic lung disease, asthma and cardiovascular disease – many of the health risks Johnson thought would lessen with vaping.

She said, “Keith, I’m worried about you because you’re exposing yourself to all kinds of chemicals that we don’t yet understand and that are probably unsafe.”

“Because Dr. Jacqui cared about me so much, I always was 100% honest with her,” Johnson said.  “She made all the difference for me and gave me the courage and inspiration I needed to quit smoking cold turkey.”

On New Year’s Day, Johnson quit smoking. To keep himself focused on his goal, he puts $7.50 – the cost of a pack of cigarettes – into a big Folger’s canister every time he even thinks about smoking. He’ll use the cash to purchase great Christmas gifts for his grandkids.

A few weeks after quitting, he had a medical check-up: “I announced that I hadn’t had a cigarette since Jan. 1. Dr. Jacqui was so happy. I just love her. If it wasn’t for her, most likely I’d still be smoking.”

In fact, like many former smokers, Johnson now finds the smell or taste of cigarette smoke intolerable.

“I don’t have any craving for cigarettes, and my body feels 100% better now. I can even walk up two flights of stairs without stopping or even breathing hard. I feel really good about sticking to my guns on this.”

Dr. Gierer admits she has been known to give hugs and jump up-and-down with patients to celebration their success: “Do you know how delightful it felt to help Keith finally quit smoking, especially when his previous attempts hadn’t worked? It’s a great shared victory, for Keith and for me!” 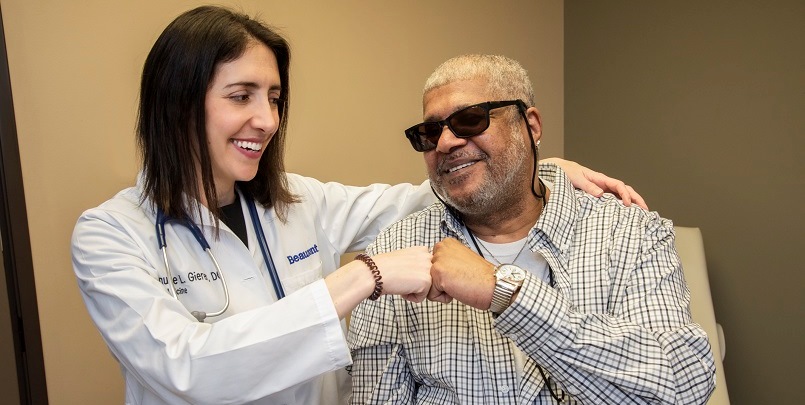 Dr. Gierer’s formula for success includes prescribing an appropriate dose of an FDA-approved nicotine replacement drug, such as a nicotine patch. While this didn’t work for Johnson, it has for others.

“If a patient smokes two packs a day, I’d have to start him on a high dose, otherwise his physical nicotine craving would not be met and he’d probably relapse.”

Gradually, Dr. Gierer lessens the dosage of the nicotine patch to wean them off the drug.

Dr. Gierer asks patients to pay attention to the thoughts running through their minds when cravings first emerge. By doing this, patients can identify the triggers for these urges, which allows them to find and implement strategies to counteract them, such as Johnson’s coffee can of cash.

She starts patients on this path by having them think about common smoking situations and suggesting alternative choices. If a patient always smokes after a meal, he or she could instead:

She also shows patients how to use guided health imagery techniques to help relax their muscles and open their minds to images of being smoke-free and living healthy.

Over the long run

“It takes about 3 months to kick the habit. If a patient relapses, it’ll be easier the next time he tries, and he can trust I will be by his side.”