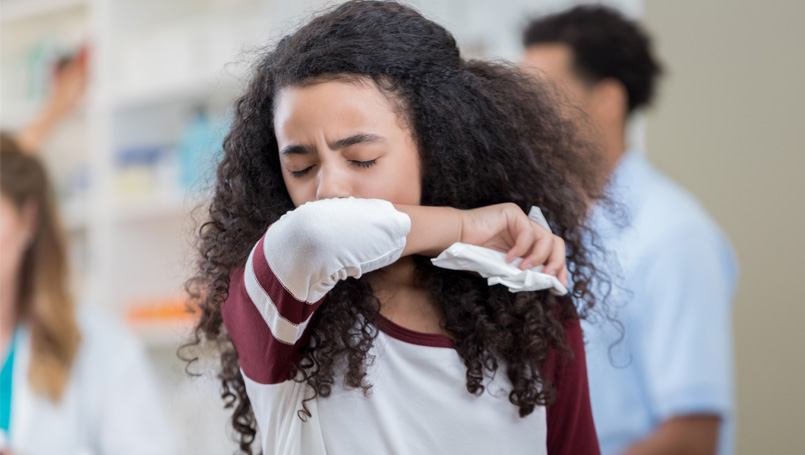 How common is whooping cough and what symptoms should you look for? A Beaumont infectious disease specialist has the answers.

Incidence rates of pertussis, the disease commonly known as whooping cough, have been increasing in recent years after a long period of decline. We spoke with Dr. Joel Fishbain, an infectious disease specialist at Beaumont, Grosse Pointe, to learn more.

What is whooping cough?

Pertussis is the medical name for whooping cough, which is a potentially severe bacterial infection of the respiratory tract. It causes people to have coughing fits and they can gasp, causing the “whoop” sound or even vomiting after the fits. Pertussis is not a common disorder.

At first, symptoms can resemble the common cold:

After several weeks, the cough can come in fits or groups known as paroxysms.

How common is it?

The most likely - but I wouldn’t say definitive - explanations are as follows:

Who is most susceptible to it, and why? Is it worse at any particular age?

People who have not received the pertussis vaccine, or older adults who aren’t up to date on their vaccination, are at the highest risk for developing whooping cough. Infants younger than 1 year of age are the most susceptible and have the highest rates of complications, including death.

Pneumonia is the most common complication, but older people could develop complications related to the coughing fits.

How is whooping cough treated?

The best prevention is vaccination of pregnant women. In addition, all household contacts should be up to date, and babies should get their vaccinations as recommended. (Here is the Centers of Disease Control and Prevention’s recommended pertussis vaccination schedule.)

After 21 days of symptoms, treatment is less effective. Early diagnosis of the disease and treatment with antibiotics are important. Antibiotics should be given to contacts of confirmed cases - even if they have been vaccinated - to reduce spreading the infection. Your local health department will assist your doctor with this important public health process.

How can people avoid whopping cough?

Staying up-to-date on vaccinations and avoiding contact with someone who has recently been diagnosed.

The most common misconception is that the vaccine has significant side effects and toxicity. In reality, the complication rate for pertussis infection far exceeds that of the vaccine.

What is Antibiotic Resistance and Why You Should Care

Dr. Chittick explains what antibiotic resistance is and clears up some common misconceptions about it.

What to Know About West Nile, Zika and Other Mosquito-Transmitted Viruses

Whether you're traveling or spending time outdoors, educate yourself about mosquito-transmitted diseases.

Stop by one of 13 Metro Detroit IHOP locations to benefit Beaumont Children's on National Pancake Day.

Because early detection of autism is linked to significantly improved outcomes, the discovery of early predictors c...