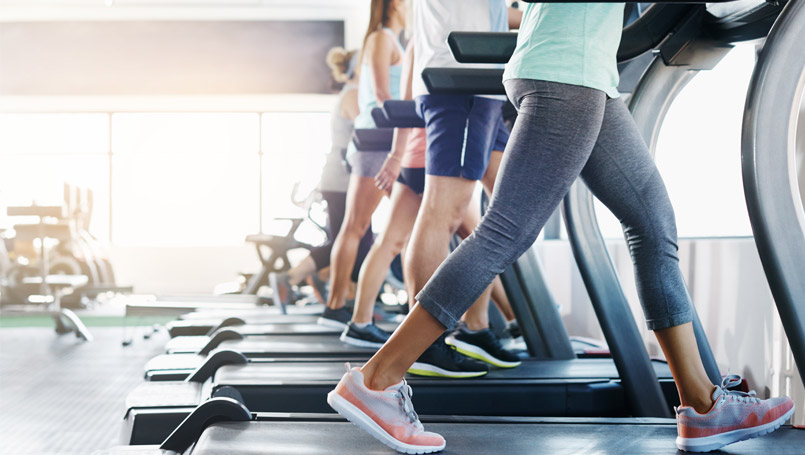 Lower body weight, a healthy heart and stronger bones are all advantages of doing either activity regularly.

Walking or Running: Which Exercise is Best for You?

Walking or Running: Which Exercise is Best for You?

As promising as workout goals are, very few are ever achieved. More often than not, people’s goals are way too challenging or unrealistic. They simply can’t accomplish them in the long run.

But that doesn’t have to be the case anymore. According to Nathan Adams, fitness coach and general manager of the Beaumont Health Club, people can begin their workouts as lightly as they’d like and then gradually work their way towards fulfilling the current physical activity guidelines. These guidelines, issued by the U.S. Department of Health and Human Services, stress that people should either walk 150 to 300 minutes a week, or jog and/or run 75 to 150 minutes every week.

“If people start off with only 10 minutes of walking a day, it’s better than what they were doing,” Adams says. “Once they become more comfortable with it, they’ll either continue to add to the amount of time they walk or they’ll eventually jog or run.”

Of course, the differences in walking and running are obvious. Did you know if a person weighs 160 pounds they’ll burn nearly 160 calories by walking at a brisk, 3.5 mph pace for 30 minutes? But if they run instead (at roughly double the speed), they’ll burn more than twice as many calories, according to Adams.

By easing into jogging or running at a comfortable pace and following the HHS guidelines, people - regardless of age, current health state or past experiences with exercise - will likely notice the following short- and long-term health outcomes.

A much healthier body weight

Although burning 160 calories in 30 minutes may not seem like a lot, the benefits can be long lasting if people walk consistently. According to a Harvard University research study, which examined 32 obesity-promoting genes in approximately 12,000 people, if participants walked nearly every day, the impact of the genes decreased by nearly 50 percent.

Even by walking at a slower, yet consistent, pace, people can reduce their overall body weight by 5 percent in a fairly short amount of time.

The importance of maintaining a healthier body weight shouldn’t be overlooked either. Once walkers reduce their weight to whichever amount they have in mind, they must continue to follow their walking regime, or else they won’t maintain consistency. In fact, as walkers lose more weight, they’ll have more energy to workout longer (and at a faster pace), leading to even more potential weight loss.

By transitioning into jogging or running, people will not only burn more than double the amount of calories during their workout, but they’ll also burn them after their workout. If people exercise at a higher intensity (for example, slower than a marathon pace, yet faster than an easy pace), they can enjoy the benefits of “excess post oxygen consumption” - in other words, the continuous burning of calories after runs or jogs are completed.

“The bottom line is that the harder people work, the more calories they’ll burn, which is the key to losing weight,” Adams adds. “People can lose weight faster by learning to make speed walking, jogging or running a part of their lifestyle.”

The bottom line is that the harder people work, the more calories they’ll burn, which is the key to losing weight.

Consistent walking also leads to an improvement in circulation, which, in turn, decreases people’s blood pressure and strengthens their hearts, resulting in a lower risk of heart disease and stroke. By increasing their paces and length of exercise, whether they choose to run or jog, people will continue to improve their circulation and notice other heart-healthy benefits.

“Not to mention, a small decline in weight can also reduce the risk of Type 2 diabetes,” Adams says.

Every time a person chooses to walk, they will lower their blood sugar. This decline becomes even more obvious when people choose to jog or run for 75 to 150 minutes every week instead.

Walking - and, eventually, jogging or running - can also increase bone mass, which is necessary for exercisers’ overall health, as well as their performances during walks and runs.

“Bones play so many roles in the body, from providing structure and protecting organs, to securing muscles and storing calcium,” Adams explains.

Regular walking or running can even reduce the loss of bone mass, as well as the risk of bone fractures, if people already have osteoporosis. And, regardless of some people’s opinions, there aren’t any signs that running harms people’s knees, especially if they have proper running form, good stability and mobility (through strength training and stretching), and a healthy body weight.

“Whether people choose to run or walk, either is an excellent form of exercise,” he stresses. “Those who regularly do either will typically have lower body weights, healthier hearts and stronger bones than people who aren’t active.”

How Walking Benefits Your Health & How to Get Started

Nearly $150,000 was raised at this annual event to benefit the renovation of the cardiac catheterization lab at Bea...