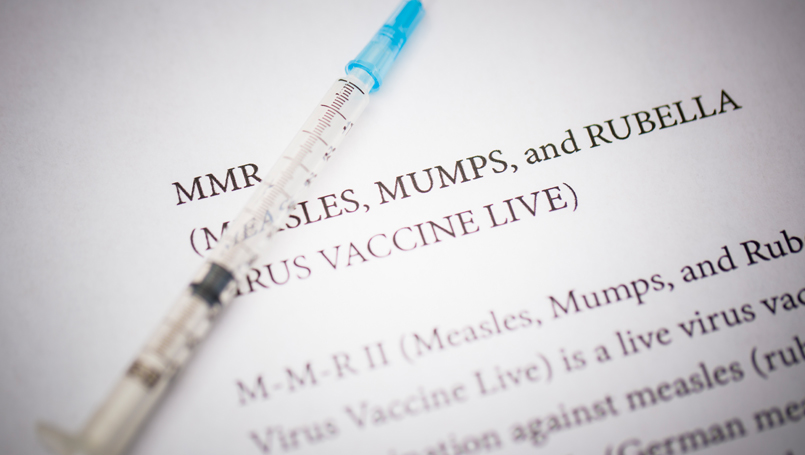 Instances of localized measles outbreaks in the U.S. have raised questions about this once eliminated disease.

Measles: What You Need to Know

Measles: What You Need to Know

For updates and information on the Oakland County measles cases, please follow the Oakland County Health Division. If symptoms develop, do not visit your doctor or emergency room unless you call ahead so they can take precautions to prevent exposure to other individuals.

Although it was declared eliminated from the United States in 2000, measles has rocketed back into the public eye in recent years following several well-publicized instances of localized outbreaks, including current news stories about new cases in Oakland County.

We spoke with Nicholas Gilpin, D.O., an infectious disease specialists and chief medical officer at Beaumont, Grosse Pointe, to find out more about measles and how to prevent it.

What are the measles?

Measles, also called rubeola, is a highly contagious acute respiratory viral illness. Infections due to measles have been declining since the development of a vaccine in the early 1960s, but recently there have been several outbreaks throughout the United States in areas where vaccination rates have fallen.

After exposure, the measles incubation period is around one to two weeks. During this time, the infected person will show no symptoms. As the disease begins to manifest, the initial symptoms of measles include the “three Cs” - cough, coryza (runny nose), and conjunctivitis (pink eye). Once these symptoms begin to wane, a high fever and splotchy red rash appears on the face, spreading to the trunk and arms.

The infection can last two to three weeks, but the contagious period is anywhere from about four days before to four days after the rash appears.

If symptoms develop, do not visit your doctor or emergency room unless you call ahead so they can take precautions to prevent exposure to other individuals.

How common is it?

Measles remains a relatively uncommon infection in the United States thanks to the availability of a highly effective vaccination. In the last two decades, the number of patients per year infected with measles in the U.S. has averaged between around 60 and 100 cases. However, due to declining vaccine rates, the number of cases in recent years has jumped to more than 200 per year.

Why is it coming back?

Every measles outbreak that has occurred in the U.S. in the last decade has been the direct result of either an unvaccinated traveler or a community of persons with low vaccination rates. Fears of the possible effects of the vaccine have led many to avoid vaccinating their children against measles, and unfortunately many countries outside the U.S. still do not routinely have access to measles vaccination.

Who is most susceptible, and why? Is it worse at any particular age?

The ones most susceptible to complications from measles are those who are very young, very old, and those who have compromised immune systems from certain medications or medical conditions. For medical reasons, people with severely compromised immune systems are unable to receive the vaccine. They rely upon the “herd immunity” of the population to keep them protected. As the rate of vaccination in a community begins to decline, the “herd” is no longer protected, and those who are at greatest risk of complications are potentially exposed.

How is it treated?

There is no antiviral therapy available for measles. Treatment consists of supportive care, fever-reducing medications like acetaminophen and ibuprofen, and drinking plenty of fluids to keep from getting dehydrated.

How can people avoid getting the measles?

Vaccination is the best defense against contracting measles. The vaccine is routinely given to children beginning at 12 to 15 months, with a second dose given between 4 and 6 years of age. People born before 1957 are presumed to be immune to measles, but those born during or after 1957 without evidence of immunity should get at least one dose of vaccination. If a person is uncertain whether they are immune or not, a blood test performed by their physician can show if they have immunity or not.

Many people believe that because measles was a widespread disease several decades ago, vaccination is not necessary or important. The line of thinking often goes, “I had measles as a child and I’m fine, therefore it’s okay for my children to have measles as well.” This faulty logic overlooks a couple of key points.

First, complications from measles infection are more common than many people think. Even in healthy children, measles can cause serious illness requiring hospitalization. About one out of every 1,000 persons infected with measles will develop acute encephalitis (inflammation of the brain), or possibly die from respiratory and neurologic complications.

What do you say to those who believe vaccinations are harmful or dangerous?

The measles vaccine is given as a combo vaccine along with mumps and rubella, collectively called “MMR.” It is one of the most effective vaccines available; nearly 97 percent of those who receive the vaccine develop immunity to measles. The most common reaction to the measles vaccine is inflammation at the site of the injection, mild soreness, or a low-grade fever.

It is widely accepted that the risk of potential complications from measles infection far outweighs the very minor risk of side effects from the vaccination itself.

Some parents have chosen to avoid vaccinating their children because of deceptive misinformation. In the late 1990s, a scientist published a controversial paper indicating a possible link between the MMR vaccine and autism. That paper has been declared fraudulent and misleading, and has since been removed from the medical literature. In addition, countless studies have tried to replicate these results over time, and none has been able to show this link between the MMR vaccine and autism or other childhood developmental disorders.

Who needs a measles booster?

According to the CDC, “People who received two doses of measles vaccine as children according to the U.S. vaccination schedule protected for life, and they do not require a booster dose.”

That being said, a lot of people born after 1957 do not recall if they received 2 doses, or they may not have complete documentation. If there is doubt about whether someone is adequately vaccinated, this warrants a trip to the primary care physician. The primary care physician may opt to give the MMR vaccination, or they may check blood tests to see if there is evidence of prior immunity to measles. There is no harm in receiving another dose of the MMR vaccine if you are already immune.

Infant & Children Vaccinations: When and Why

Adult Vaccinations: When and Why

Caring for COVID-19 Symptoms at Home

80% of people who contract COVID-19 will experience mild symptoms and recover without requiring hospitalization.

Is it Allergies or COVID-19?

Tips to Boost Your Immune System During the COVID-19 Pandemic

Several things you can do to increase your immune system’s ability to fend off the coronavirus or other diseases.

Hudson and his sisters came prepared with questions for the Hollywood star and Wahlburgers chef.

Beaumont Health caring for COVID-19 patient, increasing efforts to contain the spread of the virus

Beaumont's medical team is currently caring for the first Beaumont patient who tested positive for COVID-19.