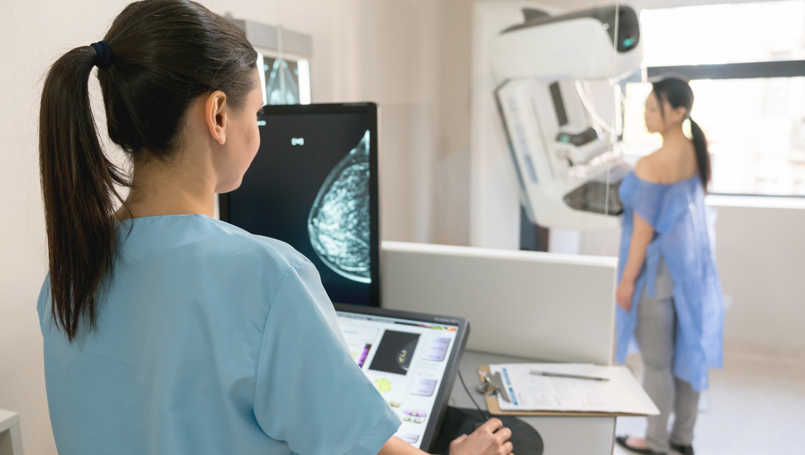 About half of all women have dense breasts.

Having dense breasts can be a health issue for women. But you can only determine whether you have them via a mammogram - not by feel alone.

About half of all women have dense breasts, defined by the presence of more fibrous and glandular tissue that distinguish them from breasts characterized mostly by fatty tissue. It’s more common among younger, premenopausal women.

The presence of all that fibrous and glandular tissue shows up on a mammogram as solid white, which can obscure the appearance of tumors, which also show up as white. By contrast, nondense breast tissue shows up as dark, transparent areas.

“It’s important to understand that younger women are likely to have dense breast tissue, and that can lower the sensitivity of mammography so that if there is something cancerous, it can be difficult to detect,” says Helen Mabry,M.D., a breast surgical oncologist at Beaumont Hospital, Trenton.

Researchers aren’t entirely sure but say the types of tissues found in dense breasts reflect hormonal stimulation. The more that breasts are stimulated by female hormones, the more cell division occurs inside the breast, inviting the possibility of genetic mutations. “That’s the thought behind it, but we don’t know exactly why,” Dr. Mabry says.

While not all young women with dense breasts have a higher risk of breast cancer, breasts typically grow less dense with age, and particularly after menopause - though women who undergo hormone replacement therapy often experience increased breast density.

Women who have dense breasts should be made aware of it once they get their first mammogram, usually around age 40, and seek additional imaging if they have a family history of breast cancer, Dr. Mabry explains.

“You should seek out the 3-D mammogram, also known as tomosynthesis,” advises Dr. Mabry. “That tomosynthesis can overcome breast density by looking at multiple slices of images through the breast.”

It looks and feels the same as a regular mammogram for women, but is better able to detect small tumors. The tradeoff is a slightly higher dose of radiation, but Dr. Mabry says it’s worth it for women with extremely dense breast tissue.

Other alternatives are automated whole-breast ultrasound, which uses soundwaves to produce images of the whole breast, or a breast MRI for women with a strong family history of breast cancer or a high lifetime risk due to genetic mutations, a previous biopsy that showed atypical cells or a prior history of the disease.

Staying current on your breast exams and knowing your breast tissue makeup are one important way to reduce your risks. Another is more general.

“We can all reduce our risk of breast cancer by adopting a healthy lifestyle, whether we have dense breasts or not,” Dr. Mabry adds. “That includes being physically active and drinking less than seven drinks a week, maintaining a normal body weight, avoiding junk food and sweet beverages and also avoiding tobacco.”

The physicians focused on how Black women dealt with getting screened and unique issues relevant to them.