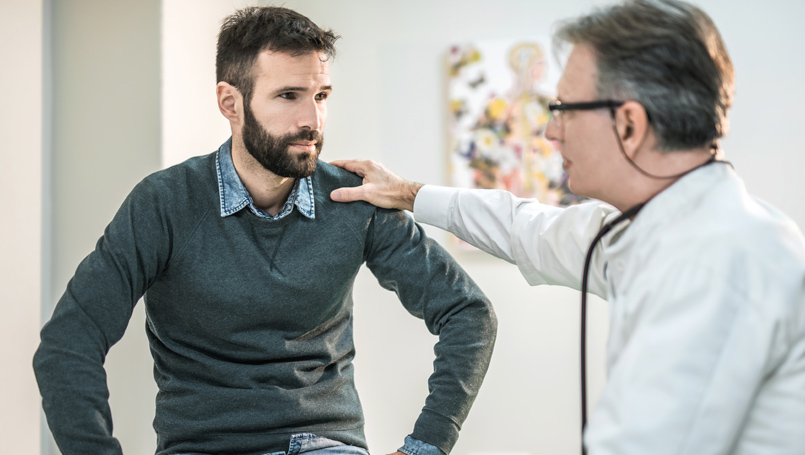 In the world of personal health, there are certain ailments that are downright uncomfortable to talk about. Think things like body odor, bad breath, hair loss, sexually transmitted infections (STIs) or other issues affecting your nether regions.

Dr. Nick Gilpin, an infectious disease specialist and the co-host of the Beaumont HouseCall Podcast, calls them the “Oh, by the way” moments - things patients often divulge when they’re visiting the office for something else.

He and fellow host Dr. Asha Shajahan, a family medicine physician at Beaumont, talked about common embarrassing symptoms on a HouseCall episode.

“There’s no taboo topic for a doctor,” Dr. Shajahan added. “We’ve seen a lot of crazy things over time.”

Sweating is a perfectly normal bodily function, a way for the body to cool itself. But it makes many people understandably self-conscious when, say, they arrive for an important meeting at work, party or special event drenched in sweat.

That goes double if your sweat is coupled with body or foot odor.

Excessive sweating is typically the result of an exaggerated emotional response, being anxious or having a hormonal imbalance. But you should be concerned when it happens when it’s not hot out or there’s no other obvious trigger. It could be a sign of hyperhidrosis, a condition that affects about 8 million Americans.

If you sweat excessively, you should see your doctor to rule out other factors, including diabetes, thyroid issues, hyperglycemia and hypoglycemia, an infection, anxiety or hormone imbalance, which can afflict post-menopausal women. “Those are all things that can cause excessive sweating that you can correct,” Dr. Shajahan said.

Some people simply produce more sweat than others. Doctors can issue you prescription-strength antiperspirant, even for your feet. Botox injections can help with sweaty palms, and anticholinergic drugs help lock the body’s sweat triggers. But if that doesn’t work, it’s time to look for organic causes.

If you suffer from night sweats, when you wake up night after night drenched in sweat, that could be a sign of an underlying infection, Dr. Gilpin said. So you should definitely see a doctor.

People often tell their doctors that they get bloated after eating a meal, or constipated. Many surmise that a certain food that they ate causes gas, or that they are lactose or gluten intolerant.

But oftentimes, constipation is down to simply not eating enough dietary fiber. Nervousness, stress and your diet can also stress the digestive system, causing diarrhea or gut stress.

It’s also important to consider the role of air, which gets into the intestines via swallowing or drinking. Another possibility: your intestinal flora — a.k.a. gut bacteria —may be producing gas as a byproduct of your metabolism.

As Dr. Gilpin points out, babies often suffer from excessive gas because they’re swallowing air. And the only way for air to escape the body, to be frank, is by farting or belching.

Some people believe they suffer from irritable bowel syndrome, which is a complicated disease that is diagnosed after a process that likely includes a colonoscopy and ruling out other causes.

If you suffer from excessive bloating and flatulence, it could also be due to something called FODMAPs — an acronym for fermentable oligo-, di-, mono-saccharides and polyols. These are short-chain carbohydrates that the body doesn’t digest well. They’re found in many foods like wheat, beans, fruits and vegetables.

Dr. Shajahan advises patients who have digestive troubles to keep a food diary, so you can see what you ate that day if you experience diarrhea. Or, if you’re constipated, modify your diet before seeking a laxative product. Berries, flax and chia seed, and leafy greens will often do the trick.

Many patients complain of bad breath despite taking breath mints and mouthwashes, and despite the fact that their dentist says they don’t have gingivitis. Dr. Gilpin says it’s important to distinguish whether a person actually has bad breath from a clinical perspective.

“Once you get to real bad breath, then I think the majority of cases of real bad breath, real halitosis, are caused by disorders of the mouth, the teeth and the gums,” he said. “Gingivitis, teeth that have not been cleaned or flossed, trapped food, the back of the tongue is an area that also can trap food and that’s where most of the bad breath comes from.”

Other causes of clinical bad breath include chronic sinus issues, smoking, dry mouth after sleeping with your mouth open, or certain medications. Oftentimes, increasing the amount of water you drink can help.

If you truly have bad breath, Dr. Gilpin advises visiting a dentist as your first step. If you’ve tried modifying your lifestyles, flossing, brushing, good oral care and you’re still having issues, then your next step should be to visit an ear, nose and throat (ENT) doctor.

If you have bad acid reflux, that can also cause bad breath, and you should see a gastroenterologist. Controlling your intake of caffeine and spicy food may help you in this case.

Hair loss is a difficult subject for anyone, but especially women. But there’s a big difference between your hair falling out due to aging, stress, being in menopause or thyroid hormones, and actual alopecia, where you have patches of no hair growth.

For benign hair loss, there are some possible solutions. The first deals with diet; you should eat more proteins, vitamin D, and vitamin B12. You can also get your vitamin and hormone levels checked. Women, Dr. Shajahan said, often have low iron levels, so taking iron supplements, or eating iron-rich foods like lean red meats, shellfish, beans or spinach, can help.

It’s also important to maintain good scalp health by making sure you have good shampoos and conditioners and not wearing your hair tied up too tightly in a bun or ponytail.

If you have alopecia, you may need to see dermatologist, who can prescribe medications or steroid injections to help stimulate hair growth.

Dr. Gilpin said doctors can learn a lot by talking to patients about their hair loss, patterns and timing. “But if you can’t get to the bottom of it by just asking the questions, a dermatologist and a biopsy is going to be an important next step.”

Itchy things below the belt

Common in young adult women, bacterial vaginosis is a type of bacteria that changes the balance of flora in the vagina and causes discharge that is smelly and uncomfortable. Normal vaginal flora, Dr.Gilpin explained, leans toward lactobacillus, a generally benign bacteria characterized by a clear discharge with no odor. When it transitions toward BV, the discharge becomes yellow and fishy, and can be uncomfortable.

Both BV and vaginal yeast infections are not sexually transmitted, per se, but they are often associated with sexual activity and flare up afterward. Condoms and taking antibiotics can sometimes cause yeast infections.

“BV and vaginal yeast infections can be unbelievably frustrating,” Dr. Gilpin said. “They can have a recurrent, relapsing nature to them and it’s extremely frustrating, so don’t be ashamed to talk to your doctor about them. You don’t have to hide in the shadows. I think that this is a very common thing, and it’s a very treatable thing.”

It’s especially important to talk to your doctor about issues you notice below the belt because STIs can lead to fertility problems if left untreated. Also, the presence of one STI could mean there are others lurking undetected, Dr. Gilpin said.

Of course, there are other bumps common to the genitalia region that aren’t STIs. For example, people sometimes mistake razor bumps or irritated hair follicles for genital herpes. There’s also jock itch, which is a skin fungus that’s treated with a topical antifungal, and women sometimes suffer from a condition called Bartholin’s cysts, which form on either side of the labia and can become inflamed and painful.

Yeast infections also can occur between the breasts, where they are treated by topical creams.

Both Dr. Gilpin and Dr. Shajahan said patients should know that their doctors are bound by strict confidentiality agreements and don’t shock easily.

“If it’s enough to create anxiety in you, it’s certainly enough to bring up to your physician,” Dr. Gilpin said.

Reducing the Spread of COVID-19

It's important to continue practicing these three habits to keep you and your family safe.

Tips to Stay Healthy During the COVID-19 Pandemic

Exercise, sleep, eating healthy and reducing stress are all important habits we should be practicing daily.

Can My Gynecologist Be My Primary Care Doctor?

Why it's important to have a primary care doctor and OB-GYN.

Beaumont doctor sets the record straight, urges you to get a flu shot now

Stop asking for that antibiotic

Antibiotic resistance is a larger public health threat than most people realize.

Not comfortable talking to your doctor about STDs? Might be time for a new doctor

"The way in which our society views sex prevents patients and docs from talking to each other about this very impor...