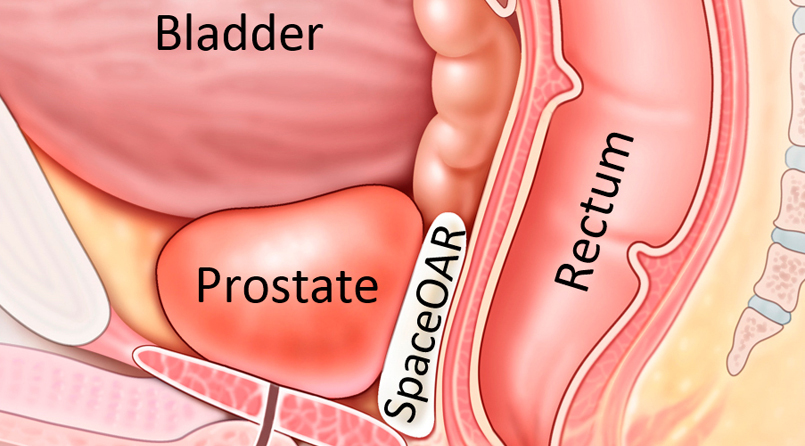 A temporary gel offers greater protection for organs at risk during radiation therapy for prostate cancer.

Radiation therapy is a popular and effective treatment for many men with prostate cancer, and now a temporary gel offers greater protection for organs at risk during treatments.

“Treating prostate cancer with radiation therapy can cause unintended injury to adjacent, healthy tissue, which can lead to bowel and urinary problems, as well as erectile dysfunction,” said Daniel Krauss, M.D., a Beaumont radiation oncologist who specializes in radiotherapy for prostate and bladder cancers. “There is now a new technique in which a temporary gel is injected through a small needle between the prostate and rectum. The gel pushes the rectum farther from the path of the radiation treatment beam. Harmful rectal doses of radiation can be almost nil.”

The absorbable gel, called SpaceOAR hydrogel, creates a barrier and separates the rectum and the prostate to protect the rectum and reduce injury during radiation treatments. Patients who choose the new gel technique, receive a local or general anesthesia in an outpatient setting. The gel is injected as a liquid and then solidifies, remaining in place for three months during prostate radiotherapy. It then liquefies, is absorbed by the body and cleared in the patient’s urine.

Said Dr. Krauss, “There is clinical evidence that the temporary gel can reduce complications from radiation therapy and help men avoid side effects they fear most – incontinence and erectile dysfunction.”

Dr. Krauss is a leading expert in treating prostate cancer with high-dose-rate, internal radiation treatments called brachytherapy. Depending on the type of prostate cancer, some patients can be treated entirely with two, or sometimes as little as one, minimally invasive brachytherapy treatment. He is the lead author of an article published in the International Journal of Radiation Oncology. His research found HDR brachytherapy given in a single-treatment can be a safe and effective alternative to longer HDR treatments for many with early-stage prostate cancer. He continues his research to further refine the treatment duration and establish an optimal single-treatment dose.

According to the American Cancer Society, nearly 161,000 American men were diagnosed with prostate cancer in 2017. After skin cancer, prostate cancer is the most common cancer diagnosed nationally among men. The prostate is part of a man’s reproductive system.