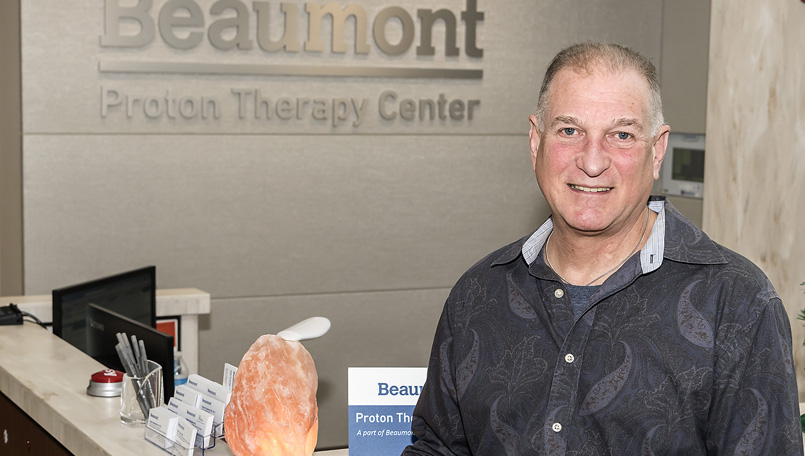 After being diagnosed with prostate cancer, Raymond was like most men – a bit overwhelmed with the news and treatment options.

After being diagnosed with prostate cancer at 63, Raymond Ross, of Grosse Ile, was like most men – a bit overwhelmed with the news and treatment options. He credits his significant other, Justine, with helping him focus.

“She was a godsend, and encouraged me to be proactive and look at all my options,” Raymond said. “Through the whole process, she has been right there by my side.”

Justine and Raymond liked the idea of proton therapy and knew Beaumont was working to open a new Proton Therapy Center. They met with Daniel Krauss, M.D., a radiation oncologist, who specializes in internal radiation therapy for treating prostate cancer, at Beaumont Hospital in Royal Oak.

Raymond and Justine also asked Dr. Krauss about proton therapy - an alternative to traditional X-ray radiation now available at Beaumont. Unlike X-rays, which pass through a patient, protons deliver radiation to the tumor and then stop – resulting in no exit dose. Beaumont is the only health system in Michigan offering proton therapy treatment. Compared to the abbreviated HDR brachytherapy, proton therapy treatment for Raymond's prostate cancer was estimated to take eight weeks, five days per week.

Dr. Krauss told the pair, regardless of their choice of therapy, a new, minimally invasive technique was now available to protect organs at risk during either treatment.

“Treating prostate cancer with radiation therapy can cause unintended injury to adjacent, healthy tissue, which can lead to bowel and urinary problems, as well as erectile dysfunction,” explained Dr. Krauss. “There is now a new technique in which a temporary gel is injected through a small needle between the prostate and rectum. The gel pushes the rectum farther from the path of the radiation treatment target beam. Harmful rectal doses of radiation can be almost nil.”

The absorbable gel, called SpaceOAR hydrogel, creates a barrier and separates the rectum and the prostate. It protects the rectum, reducing rectal injury, during radiation treatments. Patients like Raymond, who opt for the new gel, receive a local or general anesthesia in an outpatient setting. The gel is injected as a liquid and then solidifies, remaining in place for three months during prostate radiotherapy. Then, it liquefies again and exits the body through the patient’s urine.

Raymond remembers when he received his hydrogel injection. He had to ask, “Did you really do it?”

Raymond was one of the first Beaumont patients to receive an injection of the temporary gel.

Said Justine, “We did a lot of research and decided proton therapy was the best treatment for Raymond. And the opening of Beaumont’s new center was perfect timing. We discussed seeking proton therapy in Cleveland or Chicago, but traveling that far away is disruptive and expensive.”

Raymond began his eight-week treatment program this past September.

Looking back, since his diagnosis and treatments, Raymond thinks he’s lucky. “The side effects of any prostate cancer treatment program can be scary. Fortunately for me, my only complaint was occasional fatigue.”