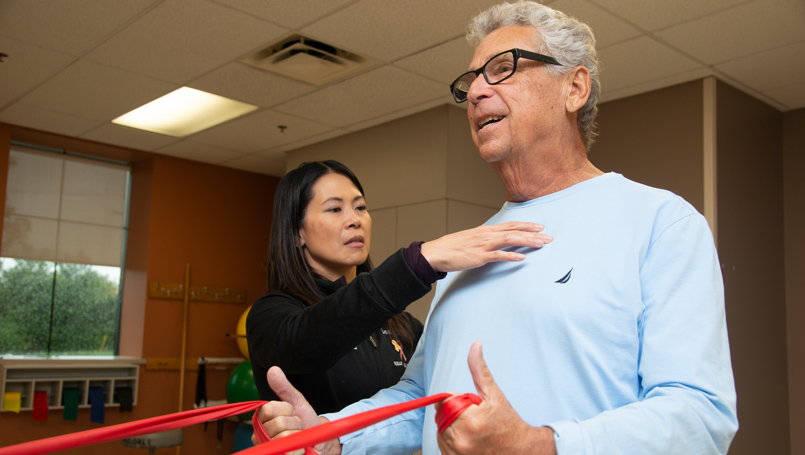 “If you lose too much weight, treatment has to stop. I didn’t want that to happen; I wanted to power through and finish as soon as possible.”

When Bob Miles’ voice became raspy, a doctor near his Bay City home diagnosed him with acid reflux and told him to lose weight. Miles, who had suffered from acid reflux for years, suspected something more ominous was going on. After several months and no improvement, he opted for a second opinion at Beaumont Hospital, Royal Oak.

Doctors found a malignant tumor on his right vocal cord and Miles soon entered a seven-week regiment of radiation and chemotherapy to treat his cancer.

As a side effect of treatment, however, fluid began to gather inside his throat and talking and swallowing became increasingly difficult.

“Eating got tricky,” said Miles, 75. “If you lose too much weight, treatment has to stop. I didn’t want that to happen; I wanted to power through and finish as soon as possible.”

Beaumont’s is the first accredited program of its kind in the country. In March of next year, graduates will take the first ever national oncology rehabilitation board exam.

The program was created to teach physical therapists and occupational therapists how to help cancer patients get through treatment and start their new life in the best condition possible, with increased strength, range of motion, and improved overall health and wellness.

“Patients in cancer treatment go through so much,” Tan said. “I wanted to be part of the team that makes it a little easier for them.”

For example, patients with lymphedema, such as Miles, experience pain, stiffness, and reduced range of motion. They also often struggle to enter and maintain proper positioning during radiation, Tan added.

“When patients like Bob are going through chemotherapy at the same time as radiation, there are a lot of side effects, including muscle and joint pain and fatigue,” she said. “We encourage exercise. We want patients to stay active during treatment to combat fatigue so they can maintain their quality of life.”

As the number of patients living longer after cancer grows, the demand for oncology rehabilitation grows, too.

“There are a lot of people, post-cancer, living with restrictions, fatigue, weakness and pain,” Christopher Wilson, director of Beaumont Health’s, Oncology Rehabilitation Residency Program, said. “We can help.”

“Our expertise gives us more tools with which to work together as a cohesive team to advocate for our patients,” Wilson added. “We put together an effective health care plan for each patient.” 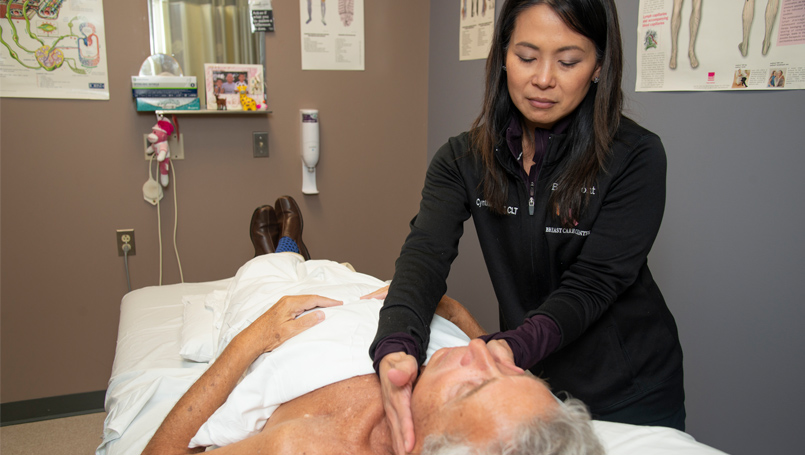 For Miles, Tan’s manual therapy helped rid his body of excess fluid. Tan also prescribed a strap Miles could wear during the night to further nudge the pooled fluid through his system. Exercise, such as walking, stretching, swimming and increased physical activity, was also promoted to increase fluid flow and overall well-being.

Miles’ confidence soared during each weekly meeting with his care team, which included a dietitian, a speech therapist, an oncologist and a physical therapist.

“They were all so incredibly gifted, engaging and willing to contribute their energy and expertise,” Miles said. “Cancer can be an overwhelming diagnosis, but I was confident in my team. Not only were they helpful to my physical care, but they also helped me mentally.”

Today, Miles is 42 pounds lighter, back to playing golf and more energetic than ever. He is also cancer-free.

“It might seem strange,” he said. “But given the Beaumont team that guided my care, doctors, therapists, nurses, radiation personnel, nutritionist, aides and various support staff, all the patients I met along the way who shared their stories, and the encouragement I received from family and friends, I wouldn’t trade my experience. I’ve been blessed in so many ways and I hope I can now give back by encouraging others just beginning their cancer-fighting journey.”