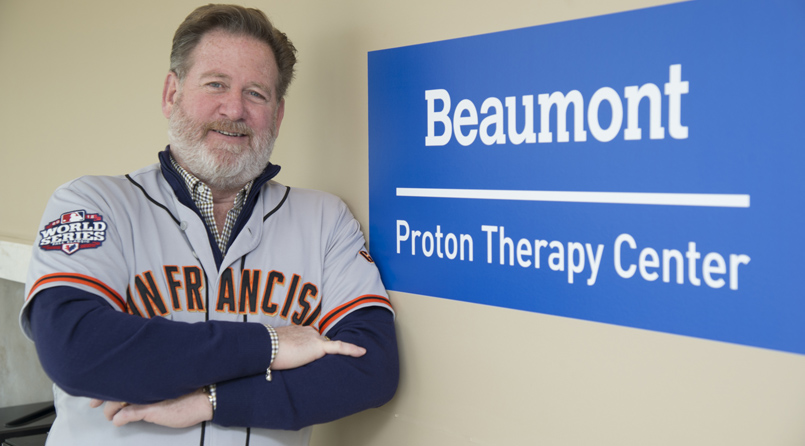 The results of his MRI shocked Tracy Clifford, 58, and his wife. The images showed a baseball-sized tumor on the base of his spine attached to the sacrum.

Back then, he was unaware of the 2,400 mile journey he’d be undertaking –  traveling to Beaumont Hospital, Royal Oak to seek leading-edge proton therapy for his tumor.

Tracy hadn’t heard of Beaumont’s Proton Therapy Center, Peyman Kabolizadeh, M.D., Ph.D., his research or their team of cancer experts. That was all about to change.

Chordoma is a cancer that occurs in the bones of the spine, sacrum and skull base. Only about 300 Americans are diagnosed with this cancer each year. The tumors can be complex to treat because they are located along the spinal cord, nerves and arteries. Chordomas are part of a group of tumors called sarcomas. While slow growing, they can be aggressive.

Blindsided by the news his tailbone pain was caused by a life-threatening tumor, Tracy sought information and opinions. His doctor referred him to specialists at a major medical center in San Francisco. He learned surgery is the most common treatment. But, a surgeon told Tracy and wife, Karin Rittenberg, he should prepare for possible complications.

Said Tracy, “We were told that I should prepare myself for the loss of functionality below the waist – including bowel, bladder and sexual functions. Even with surgery, there was a high risk of recurrence. That’s when we began to research other options, such as radiation therapy.”

The couple then met with a radiation oncologist. The doctor explained in cases where surgery is not an option or the outcome of surgery was unacceptable, people turn to definitive radiation therapy. He provided Tracy and Karin with a copy of a published research paper on chordoma and the effects of definitive radiation. The lead author and researcher was Dr. Kabolizadeh, clinical director, Beaumont Proton Therapy Center in Royal Oak. While the findings were written for health care professionals and very technical, Tracy was encouraged.

The San Francisco radiation oncologist not only shared Dr. Kabolizadeh’s research paper, but also his contact information. Both Tracy and Karin learned about the differences between photon and proton radiation. They did their homework on treatment options, but for Tracy it became quite frustrating. Karin persisted in her fact-finding, when Tracy was down emotionally.

“You have to understand, because this cancer is so rare, there is limited research available,” Tracy said. “That was the truly scary part about making any decisions.” 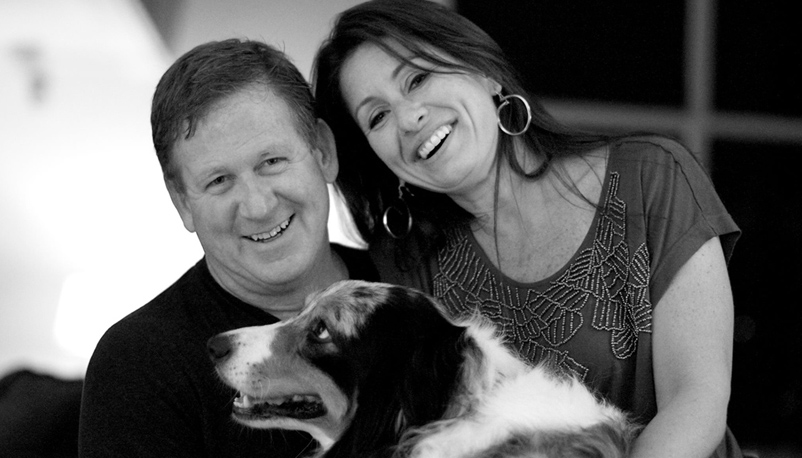 They conferred with Dr. Kabolizadeh at Beaumont in Michigan by telephone. The couple also traveled to a highly-regarded cancer center in New York City.

“It seemed everyone I spoke with had a different opinion,” said Tracy. “I then determined, definitive radiation therapy was the way to go, but I had to decide which type and where. There was photon therapy available in San Francisco, but, in my research, I found out the photon beams don’t stop at the tumor and have a greater possibility of affecting surrounding organs, too. I liked what I heard about the advantages of proton beams precisely targeting the tumor and stopping, sparing nearby tissue from harmful radiation.”

Several factors went into Tracy’s decision to choose proton therapy at Beaumont Hospital in Royal Oak. Not only were he and Karin impressed with the advanced cancer killing capabilities of the pencil beam proton therapy, but also with the expertise of Dr. Kabolizadeh.

“I looked at survivability, length of life and quality of life. Right now, I’m living life to the fullest and have a beautiful wife. We travel, entertain friends and are diehard Giants fans,” explained Tracy. “Beaumont has the most advanced equipment, and someone who is familiar with treatments for my rare cancer. I felt that gave me the best chance of success. Dr. Kabolizadeh has the vehicle and knows how to drive it! Every time we spoke, he was honest, open and candid. His candor was refreshing.”

About 3 months after his cancer diagnosis, Tracy traveled to Royal Oak in late January to begin his proton treatments. On Tuesday, April 3, he completed his nine weeks of treatment.

He not only looks forward to watching his beloved Giants at AT&T Park, but hanging out with his dog Neyo. And Karin looks forward to him shaving the “treatment beard” he has been growing since his treatments began.

Beaumont proton team ‘second to none’

“I realize I’m extremely fortunate to have been able to consider traveling to another state for treatment and live there for two and a half months,” said Tracy. “I’m also fortunate that Karin’s company has been supportive of her working remotely so she could stay with me. And I’m so grateful for the tremendous outpouring of love and support we’ve received from our family and friends during our stay in Michigan. That helped keep our spirits high.”

And when asked about his treatment experience, Tracy remarked, “Every single person that I’ve engaged with at Beaumont has been a delight. They all made what could have been a difficult experience tolerable. The facilities are impressive, clean and welcoming, but the difference is the people – best hospital staff I’ve ever encountered. The team in the Proton Therapy Center is second to none.”