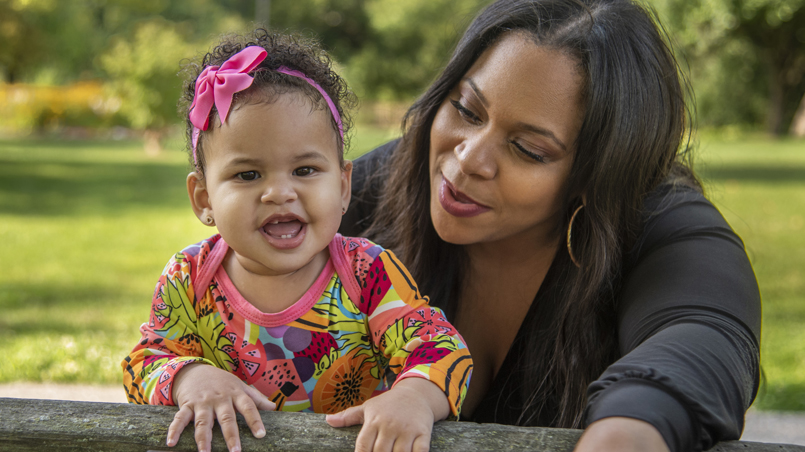 “Being pregnant and undergoing rehab was challenging, especially with medications, but my baby inspired me to never give up,” said Leah Speights, 37, of Romulus.

When Leah Speights was 35, she had one of the most devastating and joyous days of her life.

Speights, of Romulus, experienced frequent migraines since her teens. In February 2018, she had a debilitating headache.

“I decided to take a shower. When I got out, I felt like I was going to collapse,” recalled Speights. She called her sister, Belendia Williams, to come sit with her. She went to the staircase to go down and unlock the door, but collapsed. After a while, she was able to get up and go down the stairs.

“I barely made it back upstairs and into my bed, because I felt ready to collapse again,” she said.

When Williams arrived, she found Speights unresponsive. She called an ambulance, and her sister was rushed to Beaumont Hospital, Wayne.

In the Emergency Center, Speights was in and out of consciousness and experiencing a lot of pain. The medical team ran tests, and the blood work revealed something unexpected: she was pregnant. She smiled, but, then her symptoms got worse.

“Leah’s hands clenched up, her mouth twisted a bit, and it felt like she was looking through me, staring off into space,” recalled Williams.

At first, the medical team suspected seizures and treated her with medication. While that calmed the clenching, it didn’t touch the pain, which was so bad Leah began ripping out her hair by the handful.

She was admitted to the ICU and given an MRI/MRV. Dr. Suheb Hasan, a neurologist, was called.

“He told us Leah had multiple clots on the back of her brain, with one leaking, and that she was deteriorating by the minute,” said Williams.

Dr. Hasan consulted with Dr. Sandra Narayanan, a stroke and interventional neurologist and director of the Neuroendovascular Program at Beaumont hospitals in Dearborn, Taylor, Trenton and Wayne. Together, they diagnosed Leah with extensive superficial and deep cerebral venous sinus thrombosis, which are long blood clots in the main veins draining blood from the brain.

“Although she was experiencing the symptoms, the blood was still finding channels to get out of the brain, so she was still awake and talking to us,” Dr. Narayanan said.

The expectant mother needed neurointerventional surgery to remove the clots. “I’d never seen anyone with this much clotting in the veins of the brain,” said Dr. Narayanan.

Speights was transferred to Beaumont, Dearborn for a mechanical thrombectomy.

“We were in full prayer mode,” said Williams. “There were a lot of tears and panicking, but we tried to remain calm and have faith that she’d pull through. We were just in shock because, prior to this, she was healthy.”

Because Speights was pregnant, doctors used local anesthesia for the procedure to minimize potential risk to the fetus. “Inside her skull, we were able to inject blood thinners to lace the clot and then pass suction catheters to break up and suction large portions of it out,” said Dr. Narayanan.

The relief attained through the surgery was short-lived.

Clots were forming again in the corners of Speights’ veins, leading to a buildup of pressure in her brain. She needed another surgery, and this time, Dr. Narayanan used a newer technique after consulting with colleagues over Speights’ unusual case.

“I went through her jugular vein and used medication to loosen a clot, inflated the balloon on the tip of the catheter and pulled it backward with the balloon inflated,” Dr. Narayanan explained. This enabled the balloon to scrape the walls of the vein, dislodging the clot.

The second procedure was successful in removing the clot, but postop Speights had trouble walking and using her right hand. She explained, “I couldn’t write nor feed myself after leaving the ICU.”

While at Beaumont, Dearborn, Speights had her first ultrasound, which confirmed she was seven weeks pregnant.

“That’s when I knew I was going to be a mom. It was an amazing feeling,” she said. “When I heard her heartbeat for the first time with my mom there with me, they told me her heart was strong. I can’t describe that feeling. I knew I had no choice but to be strong for both of us.”

Speights surprised her rehabilitation team at Beaumont, Taylor. In two weeks, she was up standing on her own and walked with a limp until September 2018. A year later, her limp is gone and has no problem using her right hand.

“Being pregnant and undergoing rehab was challenging, especially with medications, but my baby inspired me to never give up,” said Speights. “God is amazing.” 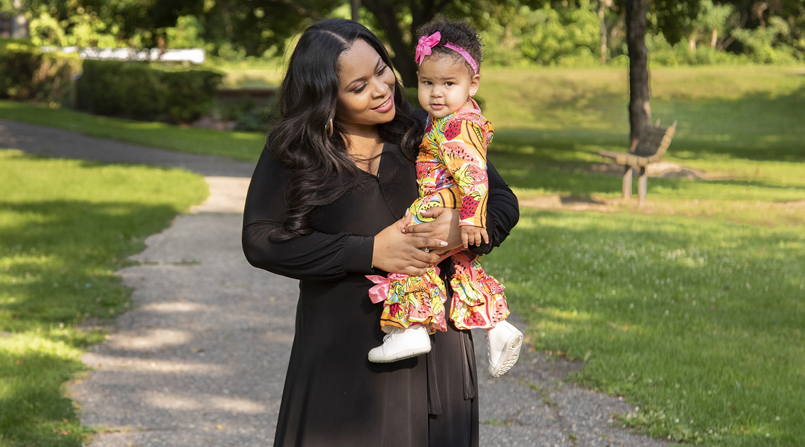 Today, Speights, 37, revels in the joy of living with her daughter, Dakota, who will celebrate her 1st birthday next month. Dakota, her only child, was born without any health issues and Leah considers her whole family lucky.

“She’s a happy, independent and smart baby. I’m really blessed,” Speights said. “A special thanks to my team of doctors, nurses, therapists, my fiancé, family and friends for all they’ve done.”

A specialized Beaumont team has cut mortality in half for patients with potentially life-threatening blood clots.