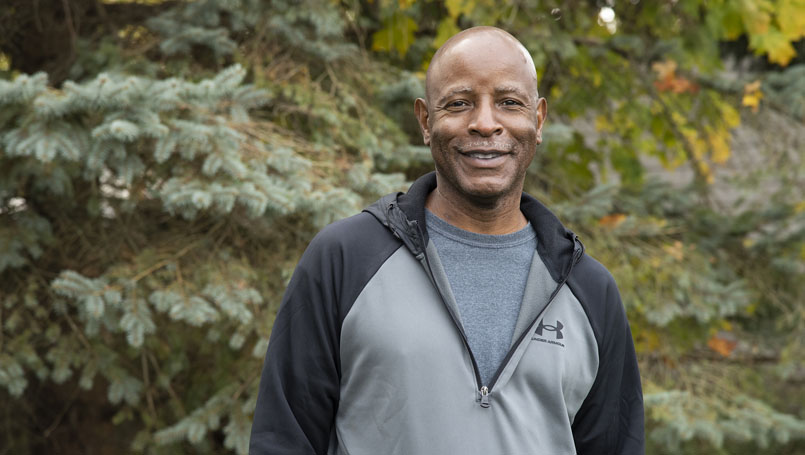 The American Heart Association says golf courses are the fifth most common place for people to have sudden cardiac death.

With the pandemic raging on, a bystander gave CPR, and community first responders, Beaumont cardiologists sav

Many feel a miracle occurred that day. After resuscitation, he began singing.

Was it random good luck? Years of medical emergency training and planning? Highly skilled heart experts? The hand of God? All these elements led to the full recovery of a golfer who collapsed in sudden cardiac death on the fourth hole at the Glen Oaks Golf Course on a 94-degree day in late-July.

“I live alone,” said Redford resident Mark Collins, 59, a Hamtramck police dispatcher. “If this had happened to me at home, I could have died. Instead, three months later, I’m strong and able to walk my dog for 1.5 miles at a stretch.”

The importance of early intervention when sudden cardiac death strikes

His chance at recovery began when “Steve” – another golfer whose last name wasn’t known – heard calls for help. He didn’t panic, nor did he let fear of COVID 19 stop him from following the essential CPR steps, calling 911 first and delivering at least 100 chest compressions per minute until Farmington Hills Fire Department arrived. Steve’s quick actions at least doubled Collins’ chances of survival with no brain damage even though he had no pulse and wasn’t breathing.

Farmington Hills 911 dispatcher Libby Wehby stayed on the phone with Steve, calling out the pace of compressions and giving support to him.

“Getting golf course access is an issue because there’s no way we could take an ambulance out there because of streams and little bridges,” said Lieutenant/EMT Gary Reid. “We needed to bring more personnel to carry our equipment to the downed patient.”

In full PPE to prevent the transmission of COVID-19, the EMTs borrowed a golf cart and quickly managed to get all the right people and equipment out there. They hooked Collins up to a new LUCAS chest compression device that took over CPR, monitored his heart and shocked him.

Collins’ heart started to shake, but no blood flowed. They charged the monitor again, cleared everyone away and shocked him again. They saw a heart rhythm conversion and moved Collins’ tongue to open his airway. He began breathing and sweating. He began having a pulse. He began to live again.

There’s something inside Collins that held onto life, even when he had no vital signs, according to the EMS team.

With Collins resuscitated, they pushed him on a gurney ¼-mile over rolling terrain to their waiting ambulance. Meanwhile, Collins was making noises and singing a tune of his own making: “Oh, my chest hurts!”

They had been in contact with the Emergency Center staff at Beaumont Hospital, Farmington Hills where they were now headed. The emergency angioplasty team – led by interventional cardiologist Dr. Samer Salka that day – was activated.

To speed the way, Farmington Hills Police closed traffic on a 4.5-mile stretch of Middlebelt Road from 13 Mile Road to Grand River Avenue to allow the ambulance faster passage to the hospital.

When the firefighter/paramedics and EMTs wheeled Collins into the Emergency Center, he was by then sitting up and continuing to sing about his hurting chest. Hospital staff couldn’t believe the patient had been in full cardiac arrest. There was talk of a miracle in progress.

Collins was rushed to the cardiac catheterization lab, where Dr. Salka discovered several of his patient’s arteries were 90-100% blocked.

Dr. Salka explained, “Hypertension, or high blood pressure, had damaged many of Mr. Collins’ vessels. We performed a nonsurgical procedure using a catheter to place stents to open blood vessels in his heart. But, he needed immediate coronary bypass surgery.”

Dr. Salka arranged for Collins to have this lifesaving surgery at Beaumont Hospital, Dearborn because of its open-heart surgical capability.

The patient vividly remembers the ambulance ride down Southfield Freeway and the 10 days he spent recovering from his bypass surgery at the hospital.

“My heart surgeon, Dr. Timothy Sell, took great care of me. The nurses were so kind and explained to me that I had to start walking to make my body stronger. They carefully got me out of bed every day and accompanied me on walks down the corridor from my room.”

“It was my privilege to do Mr. Collins’ coronary bypass surgery,” Dr. Sell said. “And, I am convinced that it was God’s providence that assembled so many people to safeguard his life that day.”

On day eight of his hospital stay, electrophysiologist Dr. Nour Juratli placed a battery-powered implantable cardioverter defibrillator under Collins’ skin just below the collarbone to keep track of his heart rate. Thin wires connect the ICD to his heart. If an abnormal heart rhythm is detected, the device will deliver an electric shock to restore a normal heartbeat when his heart is beating chaotically and much too fast.

Dr. Juratli explained, “In Metro Detroit, 90% of those who have sudden cardiac death never get a chance to receive an ICD to protect them from a future heart event because they either die on the spot or in the ambulance, Emergency Center or the ICU. Of the 10% who survive sudden cardiac death, many sustain neurological damage from lack of oxygen to the brain. These grim statistics show that Mr. Collins’ perfect outcome is a rarity.”

Collins continues to do Cardiac Rehab each week, performing prescribed exercises while being medically monitored and regaining strength with each session. He said, “I am back to work and ready to get back out on the basketball court, where I referee games.”

Golf season has ended, so Collins, a skilled player, will have to wait until next spring to get back out on the links. In the meantime, he was able to connect with the man, Steve Sergison, who helped save his life by being the first to give him CPR. They’ve had some phone conversations. “I’m alive and have the use of my whole brain because of Steve,” Collins said. “I have invited him to join me for a round of golf next season on me.”

Commenting on Collins’ remarkable recovery, Libby Wehby, the 911 dispatcher, said, “We don’t get wins like this all the time in our line of work. Mr. Collins had an angel on his shoulder.”

Dr. Salka agreed, “My faith and many years of clinical training and experience tell me all that happened to save Mr. Collins’ that day was due to God’s intervention just as much as it was to ours. So many people acted exactly right when it was needed to save this man from certain death. I am proud of everyone’s work and hope that people feel uplifted by Mr. Collins’ story and very positive outcome.”

The Farmington Hills Fire Department has given its Life Saving Award to the EMS team who helped saved Collins’ life. The fire department also will honor Steve and Collins’ Beaumont medical team with “Goal Line Stand” coins, which pay tribute to their lifesaving, heart-saving and brain-saving efforts.

Are you ready to learn about your heart risk?

Take Beaumont’s online heart risk assessment. You’ll learn your “heart age,” your risk of having a cardiovascular event, your cardiovascular risk factors and what you can change to lower your risk.