Not long ago, Evelyn began experiencing tremors in both hands. A scarf, which ordinarily took 2 to 3 hours to crochet, was taking 2 to 3 days.

Implanted device allows her to enjoy lifelong passion for crocheting

Evelyn Gladhill will tell you she’s most productive when she has steady hands. She began crocheting as a child in suburban Detroit.

Through the years, her hobby has given her a sense of pride and accomplishment. She has crocheted thousands of colorful - blankets, scarves, hats and totes. Now, at 70, her hobby helps supplement her retirement income.

Not long ago, Gladhill began experiencing tremors in both hands. A scarf, which ordinarily took 2 to 3 hours to crochet, was taking 2 to 3 days.

The tremors in her hands not only affected her ability to crochet, but also her ability to eat, drink and dress. She could no longer pour herself a full cup of coffee; and navigating a restaurant’s buffet or salad bar prior to COVID-19 became a nightmare. People stared. Her trembling hands not only embarrassed her, but led to a loss of independence and dignity. Gladhill’s husband remembers all the tears streaming down her face.

Fortunately, her doctor prescribed pills to help control her shaking hands. But, after 12 years, the medication could no longer tame her hands.

She was referred to Dr. Fred Junn, a neurosurgeon at Beaumont Hospital, Dearborn. When Gladhill heard she was a candidate for deep brain stimulation, or DBS, she was all in. Dr. Junn implanted electrodes in her brain to create electrical impulses to block signals that caused tremors. A pacemaker-like device, called a neurostimulator, was placed under the skin near her collarbone. Then, a neurologist used an iPad-like device to adjust the impulses to reduce or eliminate the tremors in her hands. After these adjustments were made, Evelyn was given her own controller which looks like an iPhone.

For the past two years, the technology has given Gladhill a renewed sense of independence. When she notices her shaking becoming more pronounced, she knows it’s time for an adjustment. Her neurologist, Dr. Adam Kuhlman, can make adjustments to the pulse generator, quieting her tremors. Even during the pandemic, Gladhill made the 200-mile trip down to Royal Oak from her home in northern Michigan.

After first witnessing those results as a medical student, Dr. Kuhlman was so impressed, he knew he wanted to become a movement disorders specialist.

“The first time I saw it is still etched in my brain. It was very powerful,” recalled Dr. Kuhlman. “It’s like instant gratification, and so gratifying as a physician to make adjustments to the neurostimulator and see a patient’s tremors melt away. And in Evelyn’s case, her tremors impact her ability to eat, write and crochet.”

Gladhill has one of the most common movement disorders. It’s called an essential tremor. It’s a neurological condition which causes involuntary shaking. It affects about 8 million Americans.

“Sadly, it is widely undiagnosed and untreated,” said Dr. Kuhlman.

Essential tremor, or as some refer to it as the “family shakes” has a strong genetic link. About half of those with essential tremor have a family history of it.

While many people believe not much can be done to help those like Gladhill, Dr. Kuhlman knows otherwise.

“I’m hesitant to call DBS a cure, but it can substantially reduce a person’s tremors,” said Dr. Kuhlman.

As Gladhill knows, tremors can greatly diminish a person’s quality of life. However, there are treatment options available including medications, physical/occupational therapy and surgery.

Along with essential tremor, deep brain stimulation, can also benefit some patients with Parkinson’s disease and dystonia. Dr. Kuhlman emphasized not all patients are candidates for this type of surgery.

DBS has been around for more than 20 years, but the technology is continuously being refined. Neurosurgeons at Beaumont hospitals in Dearborn and Royal Oak use leading edge brain mapping systems to determine placement of the electrodes.

After Gladhill’s last visit to see Dr. Kuhlman, she was happy to be back crocheting with much steadier hands.

She said, “This technology and my medical team have given me my life back.” 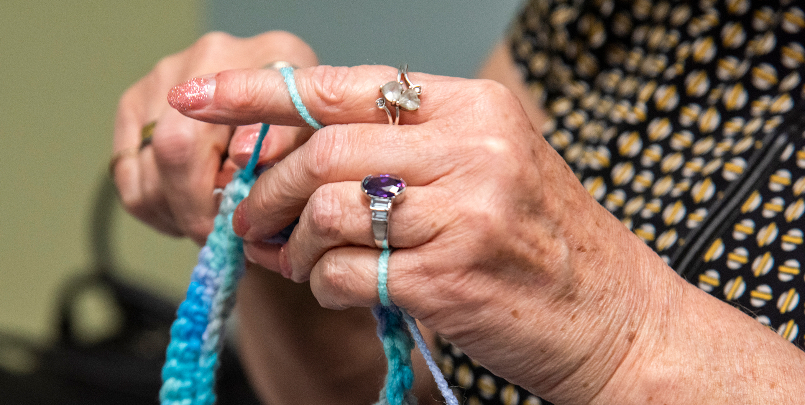