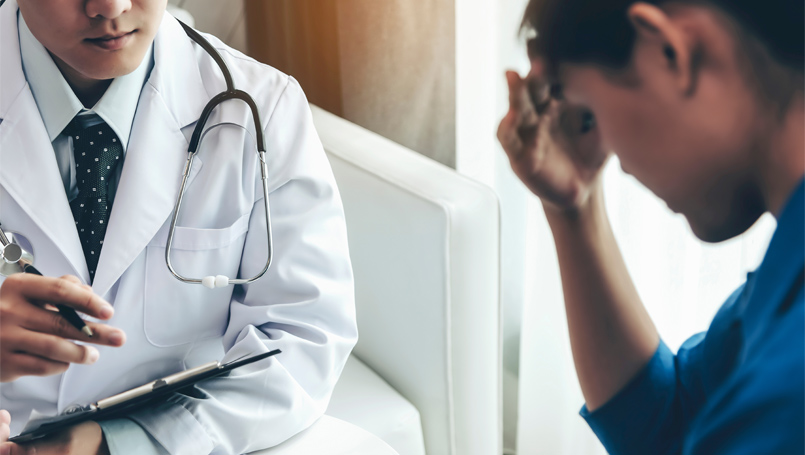 Recurrent headaches are some of the most common disorders of the nervous system, with real downsides for people who suffer them outside of the often-considerable pain they cause. Migraines alone affect an estimated 39 million men, women and children in the U.S. and are the third most prevalent illness in the world, according to the Migraine Research Foundation.

“You should seek prompt medical attention for any headache that is associated with symptoms such as fever, weight loss, profuse sweating, a change in vision, or with the onset of any confusion or neurologic symptoms,” said Dr. William Murray, a Beaumont internal medicine doctor. “In addition, any headache that results from a head injury, or toxin exposure such as carbon monoxide should be evaluated immediately.”

Dr. Murray said other reasons to see your doctor for headaches include:

Tension headaches can generally be described as “front and back,” non-throbbing “tight cap” or “band around the head” headaches. People who suffer from them may experience a heavy weight on their shoulders, frequently accompanied by painful muscles in the back of the head and neck. They may also make patients more sensitive to loud noises.

Fatigue, emotional stress, anger or intense worrying usually triggers tension headaches. They may start in a person’s teenage years and recur anywhere from once to 15 times per month and last anywhere from half an hour to seven days. Some people experience them throughout their lifetime.

Treatment typically involves the use of a nonsteroidal anti-inflammatory drug, or NSAID, or acetaminophen. Tricyclic medications like amitriptyline can be effective for more intractable headaches, while trigger-point injections used in areas where muscles have become knotted can sometimes also be used.

Migraines are characterized as a moderately severe throbbing or pulsing headache that is usually isolated at first. Unlike tension headaches, the symptoms intensify with activity. Migraines can be preceded by sensory or visual disturbances, called an aura, including strange smells or wavy or shimmering lines that seem to zigzag in your vision. Occasionally, there may be temporary loss of vision in a quadrant of the visual field.

“These patients usually are very sensitive to light, and 80% of them have nausea,” Dr. Murray said. “These headaches can last from four to 72 hours, but typically less than 24 hours.”

Migraines can be triggered by a variety of causes, including:

Treatment for migraines usually involve the use of NSAIDS for mild episodes, followed by the use of triptan drugs such as sumatriptan, which can be administered orally, nasally and as an injection. For severe, recurrent episodes, patients are treated with Botox injections.

Some patients who experience more than four episodes per month may require the use of beta blockers, tricyclics or seizure medication to prevent or decrease the frequency and severity.

Cluster headaches are similar to migraine headaches, but they’re more severe, last from 15 min up to three hours and occur once to eight times a day for anywhere from several days to two or three months. They can be described as intense, throbbing or piercing pain that develops very quickly over 5 to 10 minutes. There is usually marked tearing, in the eye on the side of the headache, or redness and drooping of the eye, and a smaller pupil.

Cluster headaches usually recur at the same time of the year and involve the same side of the head. Triggers can be nicotine and the episodes are worsened by alcohol, Dr. Murray said.

Treatment is similar to migraines, with use of triptans. In addition, the headaches can be treated with prednisone, supplemental oxygen, lidocaine nasal spray, verapamil and seizure medications such as topiramate.