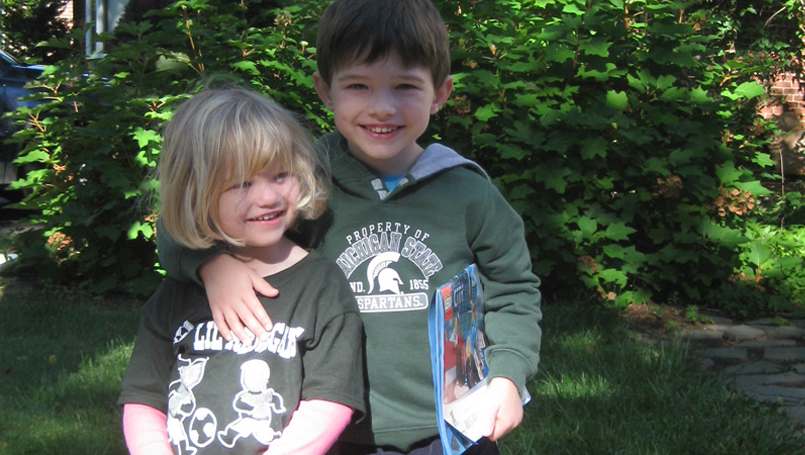 An enzyme replacement therapy has halted the progression of Megan's rare brain disease.

Megan lay there almost lifeless on the bed, an infusion line sending medication to her brain. Her father, David, sat nearby, thinking about what might have been. He remembers his 3-year-old running after a soccer ball, now four years later, she can no longer walk or talk.

Her mom, Jennifer Dilley, said, “Megan had her first seizure at 3 ½ years old and it took a long, hard year of loss, seizures and doctor appointments to arrive at a heartbreaking diagnosis.”

“Megan’s path looked much like the kids who came before her - normally developing until about age 3, when she started losing speech, skills and focus,” Jennifer said.

CLN2 is a genetic condition that robs children of their motor functions.

“Tragically, this disease can progress rapidly with devastating consequences,” explained Daniel Arndt, M.D., seizure specialist and section chief of Beaumont Children’s Neurology Division. “It’s a degenerative form of epilepsy. Most patients with CLN2 die by their early teens. And while there is no cure, the recently FDA-approved enzyme replacement therapy Brineura has halted the progression of the condition in many. Before this breakthrough treatment became available in April 2017, CLN2 was always fatal.”

Dr. Arndt and his team helped the Dilley family with Megan’s diagnosis and treatments. He ordered the genetic testing at Beaumont. Once diagnosed in January 2015, Dr. Arndt referred Megan to a specialist at Nationwide Children’s Hospital in Columbus, Ohio, a center of excellence for children with Batten disease. At the time, it was the only center in the nation offering the treatment.

“It was a horrible diagnosis,” recalled Jennifer, “But, we knew what we were up against. Not knowing, along with all the uncertainty is stressful. The diagnosis and Dr. Arndt’s referral, gave us direction.”

The Dilley family made many four-hour drives to Columbus. The trips usually involved an overnight stay. They learned about a promising, new treatment, Brineura, being studied at Nationwide Children’s Hospital and absorbed all they could about CLN2. They also received information and support from the Batten Disease Support and Research Association.

Said David, “We no longer felt alone. Other families, like us, had already dealt or were dealing with the same condition, same challenges.”

Megan was diagnosed one month too late to qualify for the Brineura clinical research study.

Jennifer said, “We desperately followed the progress of the research and waited and hoped Megan would be able to access treatment, too. As the years slowly went by, she lost many skills. Remarkably, the children we were friends with in the study did not. In fact, when we saw them every three to four months they seemed stronger, more alert, even making small gains in ambulation and verbalization. It was truly amazing.”

“Our prayers were answered in April 2017 when the Food and Drug Administration approved Brineura for commercial use,” Jennifer said. “We didn’t have a moment to spare, but we questioned if we should pursue this treatment for Megan given her age – almost 7 and having lost so many skills. She was tube fed, no longer verbalizing, unable to walk and needing constant care. We decided to take a chance that Brineura would better Megan’s quality of life.”

A Nationwide Children’s pediatric neurosurgeon implanted a reservoir in Megan’s brain. The reservoir allows the medication to be delivered directly into the fluid surrounding her brain.

Megan’s first Brineura infusion treatment was July 13, 2017 in Columbus, just six days after her 7th birthday. She continues to have these treatments every two weeks or 26 times per year. While she began her infusion therapy in Columbus, in December 2017 she was able to receive her Brineura treatments at Beaumont Children’s in Royal Oak.

Beaumont Children’s was the 11th Brineura treatment center in the nation. Pediatric neurosurgeon Karol Zakalik, M.D., helps place the reservoir in the brain; and Kate Gowans, M.D., chief, Pediatric Hematology and Oncology, provides the medication injections into the reservoir.

Megan was the first child to receive Brineura in Michigan and the first in the U.S. approved for this enzyme replacement therapy through health insurance.

“Brineura is a recombinant form of the enzyme deficient in children, like Megan, with CLN2,” said Dr. Arndt. “While not a cure, the enzyme replacement repairs neurons in the brain and can halt its destructive progression.” 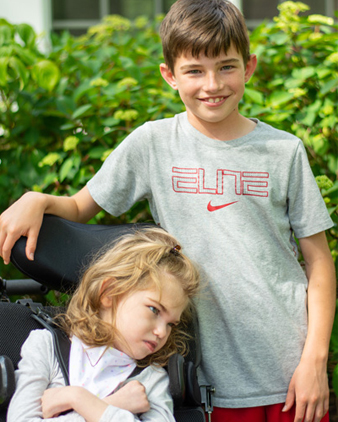 Since she began Brineura treatment about a year ago, her parents, medical team and teachers have noticed Megan’s more alert and interactive. She is expressing more emotion - smiling and laughing, as well as crying to express displeasure. Her teachers report she is more engaged at school.

Megan has also had fewer seizures. Physically, she has more control of her head and neck. Her swallowing has also improved and she is eating small amounts of food, like applesauce, by mouth. Before her treatments, she was completely tube-fed.

“We went months without a smile,” said David. “Now, we can get Megan to smile almost every day.”

Her parents appreciate Dr. Arndt and the team of specialists at Beaumont Children’s who support them and care for Megan. Instead of having to drive nearly 450 miles for infusion treatments, they now only travel about seven minutes from home.

Said Jennifer, “We truly feel Brineura is making a difference in Megan’s life and most certainly giving us hope of more time with our lovely daughter, until a cure can be found.”

If your child has CLN2 and is a candidate for Brineura, or if you would like to transition your child’s Brineura therapy to Beaumont Children’s, please call the pediatric epilepsy clinic