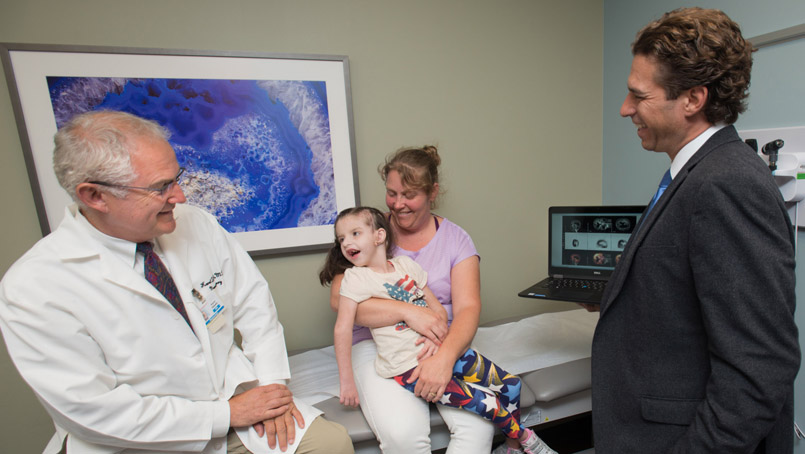 Surgeon disconnects half of Bailey’s brain, improving her quality of life.

The thought of a surgeon disconnecting half of their daughter’s brain seemed extreme. Yet after much thought, parents Joel and Crystal Clapper decided it was the right thing to do. Uncontrollable seizures were causing significant developmental delays affecting her physical growth and cognitive skills.

Since birth, Bailey Clapper, now 6, of Columbus, Michigan, has experienced many health challenges. After she was born in a Port Huron hospital, Crystal remembers Bailey being rushed to a large hospital in Detroit. She had a genetic condition, resulting in multiple health issues. “They told me to take her home and love her,” Crystal said.

In August 2012, 17-month-old Bailey experienced a medical emergency requiring a helicopter transport. She was having a prolonged seizure and her parents requested Bailey be transferred from a St. Clair County hospital to Beaumont. She was airlifted by LifeFlight of Michigan, formerly known as Beaumont One, to Beaumont Children’s in Royal Oak.

Crystal recalled, “When I arrived in Royal Oak, I was surprised. Bailey was already in the ICU and vented. That helicopter flight probably saved her life.”

That summer marked the beginning of Bailey’s seizures. But as time went on, they got worse and harder to manage. Along with Bailey’s neurologic conditions, including epilepsy, she had cardiac and digestive issues.

Her seizures became uncontrollable, resulting in significant physical and cognitive delays. By age 5, Bailey weighed only 29 pounds and had limited verbal skills. Pediatric neurologist Daniel Arndt, M.D., told the Clappers their daughter was a strong candidate for a procedure called a hemispherectomy. Brain imaging technology confirmed the source of Bailey’s seizures was located on the left side of her brain. Beaumont had recently acquired specialized neurosurgical equipment to begin a new hemispherectomy program.

DISCONNECTING HALF THE BRAIN

Said Dr. Arndt, “A hemispherectomy involves removing and/or disconnecting the half of the brain, known as a hemisphere, responsible for disruptive, life-altering seizures. By shutting down abnormal brain activity in the bad half of the brain, the surgery is designed to stop or dramatically decrease the patient’s uncontrollable seizures and their effects on the patient and their cognitive status, which dramatically improves their quality of life.”

Babies, infants and children, like Bailey, benefit the most from a hemispherectomy because their brains have the ability to reboot and relearn. Dr. Arndt says the younger the patient, usually the greater neuroplasticity - a term which refers to the brain’s ability to retrain itself to perform new functions. If one side of the brain is disconnected, the other side will take over some of the functions lost. Pediatric candidates for the procedure include those affected by stroke, hemispheric epilepsy, traumatic brain injuries and disease, including Rasmussen’s encephalitis and hemimegalencephaly.

On May 9, Bailey became the first patient to have a hemispherectomy at Beaumont Children’s. Pediatric neurosurgeon Karol Zakalik, M.D., performed the procedure under the watchful eye of Gary Mathern, M.D., a UCLA Medical Center neurosurgeon, considered a pioneer in modified hemispherectomies.

Explained Dr. Zakalik, “Bailey has multiple medical conditions, including uncontrollable nighttime seizures, along with swallowing and feeding issues.  I’ve treated her hydrocephalus with a shunt. This new technique expands our surgical options at treating epilepsy.”

During a hemispherectomy, a surgeon removes, disconnects and disables the side of the brain that is misfiring. In Bailey’s six-hour procedure, Dr. Zakalik removed part of the skull over her left hemisphere and removed the central brain. He also disconnected the left side of her brain from the brain stem and her right hemisphere.

Crystal recalled spending hours in the surgical waiting room with family. “It probably was the longest day of our lives. We were anxious and had a lot of nervousness.”

Added Dr. Arndt, “This potentially life-saving, major brain surgery can be the best option for some severe epilepsies that do not respond to anti-seizure medications. Typically patients will undergo several diagnostic tests to determine if they are good candidates for epilepsy surgery and require approval by the multidisciplinary pediatric epilepsy surgical team.”

“The idea of consenting to major brain surgery was not an easy decision, but in the end it was a quality-of-life decision,” Crystal said. “All her life, Bailey has overcome obstacles, and thanks to her medical team, she keeps surpassing everyone’s expectations.”

In the days and weeks since Bailey’s surgery, her family and physicians are pleased with her progress. She’s crawling all over the house, making better eye contact and retaining more of what she’s learning.

“It’s like someone turned on a light switch, mentally and physically,” said Crystal. “Bailey is gaining weight. I actually heard her stomach growl. She is eating well. Before the surgery, she was 29 pounds for the longest time. I was told that when her brain calms down, you’ll see a change in her weight. She’s definitely moving forward.”

Dr. Arndt is happy with Bailey’s progress, too. “She’s more alert, her nonverbal skills are strong and she’s more interactive.”

Dr. Zakalik added, “It’s exciting that we can now perform this procedure at Beaumont Children’s. As a surgeon, I’d like to think I helped make a difference in Bailey’s life. She’s making great progress. Mom can’t believe how she’s developing.”

Not long ago, Crystal recalled how Bailey reached out and hugged her dad. She’ll never forget what her husband said next: “Now, I know we made the right decision.”