Standing at just over 3 feet, 4-year-old Joey Owen walked into his most recent procedure at Beaumont Hospital, Royal Oak as green as can be, masked up and ready to “Hulk smash” his Electroencephalogram (EEG), a test that detects abnormalities in brain waves.

“He was in character from the beginning to the end,” Jimmy Najia, a registered EEG technician within the Clinical Neurophysiology Department, said. “He came in the door with his hands up as the Hulk and that’s how he left.”

This was the first Hulk sighting at the hospital, but this wasn’t Joey’s first EEG. His seizures started at just 6 months of age, and at two years old, he was diagnosed with benign infantile focal epilepsy, a genetic epileptic syndrome that spikes during sleep.

“He’s had roughly six EEGs in his lifetime,” Joey’s mom, Rebecca Owen of Taylor, said. “Because he was so little when they began, he was completely traumatized. It got to the level where he would have to be wrapped up like a burrito and held down. He would scream and cry until he fell asleep because he was so exasperated.”

Knowing what was to come, little Joey had a transformation of sorts - a change in character.

“Just before his most recent procedure, he was really scared so he asked me if he could dress up as the Hulk so he could be brave like him,” Rebecca said. “He had his costume on in the car the whole way there.”

Geared up and ready to face anything, Joey said, “I’m the Hulk, mom. We got this!” before confidently marching toward the hospital entrance. Owen said seeing her little, but mighty, Hulk walk through the parking lot was truly incredible.

“I can’t even explain how I felt because the past times, I had to carry him in crying,” she said. “For him to walk in on his own, it was a big deal. He was going to go in there and be the brave one this time.” 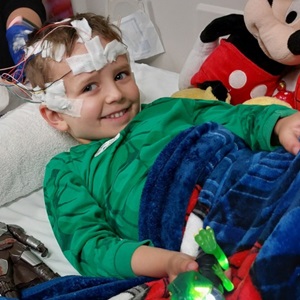 And this time was truly a different experience for Joey. He had his Spider-Man doll, Spidey blanket and a bunch of other Marvel friends by his side. But his best accessory was the smile on his face.

“This mother was watching her son have seizures since he was six months old and seeing him for the first time not be in tears: that is paramount,” Jenny Gordon, manager of Neurodiagnostics, said.

Owen said not only was the courage that her boy displayed admirable, but so was the compassion shown by Najia and Ivana Gavran-Danilyuk, the EEG technicians that worked with him that day.

“It was so funny to him when they were like, ‘Come on, Hulk!’” Owen said. “They got on his level like a pediatric department should and just accepted him as the Hulk.”

Owen said the pair even went a step further using one of Joey’s superhero action figures to show him what was coming next.

“I would say, ‘I’m going to measure your head just like this… see,’” Gavran-Danilyuk said. “’Oh, his head is 7 cm. Let’s see how big your head is now.’ And I would then measure Joey’s head.” 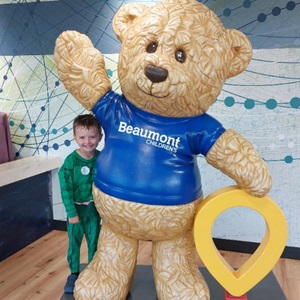 Owen added that Joey’s physician, Dr. Rawad Obeid, and the neurodiagnostic staff’s wonderful reputation for treating pediatric patients with epilepsy and other neurological disorders brought them to Beaumont, Royal Oak.

“Epilepsy is an unfortunately common condition that can lead to a lot of stress for children and their families, but fortunately we are blessed to have great staff at the pediatric neurology and epilepsy department at Beaumont to ease that stress,” Dr. Obeid said. “I think Joey’s case teaches us as medical providers and staff how much children with epilepsy go through and how creative they can become in dealing with their condition.”

Joey has been seizure-free for two years but needs to continue to get EEGs every 6 months to a year. His mom said there will be a Hulk return at Royal Oak this October for his next appointment.

Until then, this little superhero is inspiring everyone around him to “Hulk smash” their own fears.

“Joey showed us all that no matter what life puts in front of us, we all have the opportunity to be brave,” Gordon said. “We should all be little Joeys. If he could do it, certainly we can.”