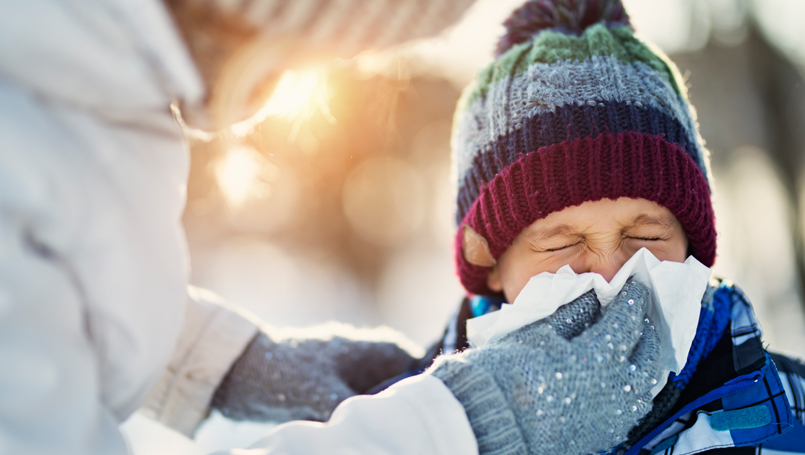 While it can be tough getting your child to share a toy, sharing a cold never seems to be an issue.

Protecting Your Child From Winter Cold and Flu

Protecting Your Child From Winter Cold and Flu

As winter settles in, we all bundle up in our warm homes. Sounds idyllic, right? But the close quarters of home and school make it easy to pass around germs. And because children aren’t usually as hygienic as adults, they are more vulnerable to getting sick.

The illness that causes a large number of absences from school is influenza. It’s easily spread by coughing or sneezing and can live for a while on desks, toys and other shared items. While the flu is easy to catch, it’s also preventable.

“The biggest tool we have to prevent influenza is to get vaccinated,” said Beaumont physician Brent Fuller, M.D. “We recommend it for everyone 6 months and older, even if you’re healthy. The studies clearly show that the flu shot is safe and effective.”

Once you or your child gets the flu, Dr. Fuller recommends comfort measures such as fever reducers, vaporizers, fluids and rest until the body can fight off the illness.

While it can be tough getting your child to share a toy, sharing a cold doesn’t ever seem to be an issue. Adenovirus and rhinovirus are the two most common viruses that cause the colds that spread through schools and daycares.

“Get out the vaporizer, elevate the head, use nasal saline/suction and drink plenty of fluids is the best way to treat a cold,” said Dr. Fuller. “But the biggest thing is the hardest thing to get people to do: rest. Stay home from work and school. Allow your body to build up your immune system.”

Another illness that seems to rear its ugly head in winter is gastroenteritis, commonly called the stomach flu. Caused by the rotavirus, norovirus or enterovirus bugs, nothing strikes fear into the hearts of parents like vomiting, diarrhea and fevers that can last from 24 hours to six days.

“Gastroenteritis spreads faster with kids because they’re not as hygienic. While we see it year-round, we see it a lot more in the winter because we’re so close together,” explained Dr. Fuller.

In addition to our closeness and hygiene, Dr. Fuller said another culprit in the spread of germs is the humidity level in our homes.

“In the winter, most of us are running the heat, which causes the air to be drier. In turn, that dries out your mucus membranes leaving you more susceptible to upper respiratory infections. Mucus defends our bodies against bacteria and needs to be watery. When it’s drier, it cracks and makes openings where the bacteria can get in. To help prevent this, we recommend 45 percent humidity indoors,” said Dr. Fuller.

“Handwashing is paramount as a preventive measure. It’s the number one way to help prevent the spread of disease,” said Dr. Fuller. “Also, get your vaccinations and boost your immune system by getting enough sleep, eat a diet high in fruits and vegetables and exercise. If you’re doing all three of those things well, your immune system will give you peak performance.”

In need of a flu shot?

What Is Monoclonal Antibody Treatment and When Is It Needed

One treatment available for COVID-19, that may help reduce the severity of illness, is called monoclonal antibody t...