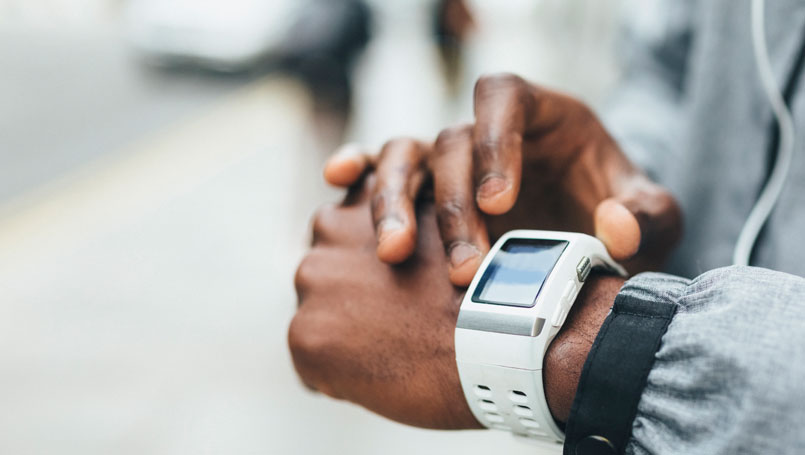 Dr. Brodsky believes the device could be a game changer for patients and medical professionals.

Beaumont cardiologist Marc Brodsky, M.D., believes the device could be a game changer for patients and medical professionals.

The watch features two electrocardiogram, or ECG, apps that can catch irregular heart rhythms that might not show up during a medical exam but can signal serious heart risks. It can also detect when the wearer has fallen down and is immobile and can call for help.

Doctors typically order a patient to wear a heart monitor for up to a month in the hopes of catching an infrequent event that could signal an irregularity and problem. But patients often return having displayed no symptoms the entire time they wore the monitor, says Dr. Brodsky, a cardiologist at Beaumont’s Ministrelli Heart Center in West Bloomfield. It’s only after the monitor is returned that they redevelop symptoms.

"The big advantage of the personal health watch devices is that they can provide 24/7 monitoring, dramatically increasing the likelihood of detecting infrequent events,” Dr. Brodsky says. “It could help identify different heart arrhythmias that may not have been picked up with the other traditional mobile monitoring devices."

Such was the case with one patient, Dr. Brodsky notes, who had become concerned over his irregular heart rate and was wearing a heart-rate monitor attached to his chest while exercising on a treadmill. The monitor detected heart rates that oscillated between 125 and 180 beats per minute during the workout. Yet the patient displayed none of his usual symptoms and suspected the monitor was broken.

Still concerned with his irregular heartbeats, the patient followed up with Dr. Brodsky and was eventually diagnosed with atrial fibrillation and treated accordingly.

“This could have gone undetected and possibly led to a stroke, which is a common side effect of atrial fibrillation,” Dr. Brodsky says. “These new devices could help decrease the number of patients that presently go undetected until after they have suffered a devastating stroke.”

Apple reportedly worked with the Food and Drug Administration and the American Heart Association to develop the new Series 4 watch. But Dr. Brodsky cautions that it remains to be seen how accurate it is at detecting arrhythmias and the number of false positive and false negative results, and he says the new device will need more study.

“It’s imperative to remember that these health watches can’t pick up all heart conditions, and their findings will need to be interpreted by an expert,” he says.

If you have concerns over your heart health, you should seek professional advice from a cardiologist.

Beaumont created the Student Heart Check screening program in May 2007. Since then, Beaumont has screened 17,863 st...