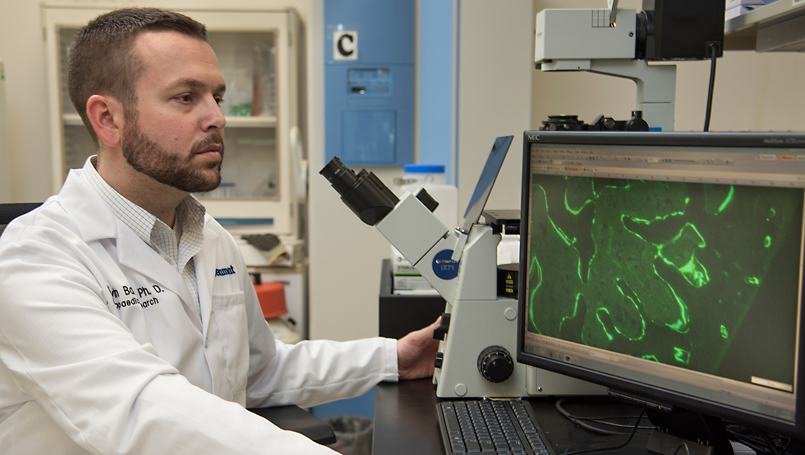 Post-traumatic osteoarthritis is the leading cause of disability in U.S. military service personnel.

Post-traumatic osteoarthritis is the leading cause of disability in U.S. military service personnel.
Beaumont Health
https://www.beaumont.org/images/default-source/default-album/logo.png?sfvrsn=d43d7fef_4

As many as 200,000 anterior cruciate ligament knee injuries occur every year, often in people under 30. It’s a painful injury that can lead to a lifetime of medical issues and eventually a knee replacement.

But, a Beaumont research team is pioneering a new solution that could slow the arthritis that occurs after an ACL injury - known as post-traumatic osteoarthritis, or PTOA - and help people avoid getting a knee replacement.

The Department of Defense awarded Kevin Baker, Ph.D., Beaumont director of Orthopedic Research, with a prestigious $1.5 million grant to study methods to modify the immune system’s response to an ACL rupture and encourage a patient’s own stem cells to slow or eliminate the joint degeneration associated with PTOA.

“We developed a strategy to reduce the body’s immune system response to a joint injury. The immune system can do more harm than good when this kind of trauma occurs. We are encouraging stem cells to migrate to the ACL-injured joint and then treating the cells with a drug. We believe changing the immune response inside the joint will significantly diminish or prevent PTOA,” Baker said.

The body’s immune system works by distinguishing normal cells from foreign cells. When the body detects a foreign cell, the immune system attacks the foreign cells without harming the normal cells. To do this, the body uses “checkpoint” molecules on cells that need to be activated, or inactivated, to start an immune response. These checkpoint molecules have been the focus of recent advances in cancer immunotherapy, where new medications inhibit checkpoint molecules that cancer cells over-produce.

Dr. Baker and his team are utilizing one of these checkpoint molecules to minimize the immune system’s overexuberant response to an ACL injury. Interestingly, the body’s own stem cells also release these checkpoint molecules and other proteins that can modulate the immune system. The research team will focus on using this new immune altering approach to slow down or eliminate damage that occurs to both cartilage and bone as a result of joint injury.

The research team hopes this will one day translate into a treatment strategy that can be used for athletes, military personnel and others that experience traumatic joint injuries.

Post-traumatic osteoarthritis is the leading cause of disability in U.S. military service personnel. Joint injuries, often ruptured ACLs, are the primary reason PTOA develops in the knee. America spends more than $3 billion a year on health care costs associated with PTOA.

The rate of PTOA in military personnel is more than double that of civilians and is the leading cause of disability for U.S. service members.

Request an Appointment with an Orthopedic Specialist

Do you have continued knee or back pain on a daily basis? Do you have an injury that just doesn’t seem to be healin...

Physical and occupational therapy are effective ways of getting back to exercise, hobbies and everyday activities a...

Larry is happy to be back outside and mowing his lawn without wincing in pain.

Beaumont is expanding its orthopedics program with the opening of a new, dedicated Orthopedic Center in Taylor.

Post-traumatic osteoarthritis is the leading cause of disability in U.S. military service personnel.