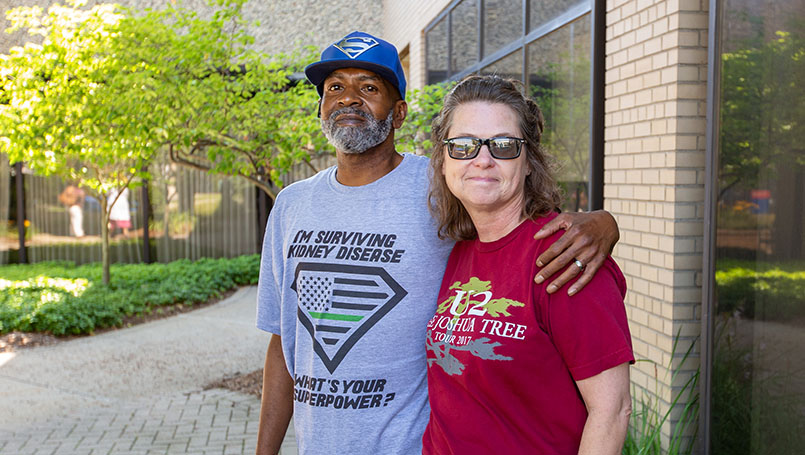 They might not be related or look much alike. They come from different backgrounds and opposite sides of the state. But these once complete strangers, Susan Tower and Roosevelt Williams, now call themselves family.

They might not be related or look much alike. They come from different backgrounds and opposite sides of the Mitten. But these once complete strangers, Susan Tower and Roosevelt Williams, now call themselves family.

“We check in on each other,” Roosevelt said. “She calls me her little brother now and she’s my big sister.”

Best of all: this duo shares more than just daily texts and brother-sister banter; they now share a kidney.

Susan said she always knew she wanted to donate one of her kidneys. Her older sister had kidney disease and needed one, but she passed away from cancer before Susan could start the process to donate hers.

“So, you see, it was always in the back of my mind that I was going to donate,” Susan said. “It was always there.”

That’s why, in September 2021, when Susan saw a news story about a Romulus man in need of a kidney, she didn’t think twice.

While the decision to donate to a stranger was simple for Susan, the process one must go through to determine if they’re a match isn’t as easy. 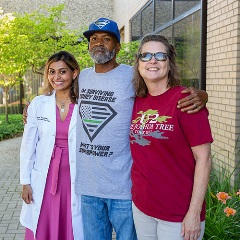 “They have to get standard medical testing, all of their screening tests done and then we test their kidney function,” Dr. Lavanya Yohanathan, a transplant surgeon with Beaumont Hospital, Royal Oak, said. “We look at parts of their medical history like high blood pressure, diabetes, whether they smoke.”

Susan said she also had to talk to a psychiatrist, so they could get an idea of her mental state and determine if she was doing this for the right reasons.

A long process – and through it all – Roosevelt had no idea that someone he never met was fighting to help keep him alive.

On April 7, 2022, Roosevelt and his wife, Latalia, got the phone call they had been waiting for since he started dialysis nearly four years ago.

“I was emotional,” Roosevelt said. “I was sitting at home, and I got the call, and I was crying for most of the day.”

“Every day we just prayed and thanked God in advance for whatever he was going to do for us,” Latalia added. “God is so good. When it finally happened… all types of emotions.”

The transplant was delayed multiple times due to COVID-19 restrictions and another time because Roosevelt contracted pneumonia. But he finally got his new kidney on June 22, 2022, thanks to his “big sister” Susan.

“I feel stronger. I feel good now,” he said. “I appreciate Susan. It’s unbelievable a stranger would do that for someone.”

Two weeks post-surgery, the Williams and Tower families reunited as one. Here’s the kicker: it just so happened to fall on the three-year anniversary of Susan’s sister’s passing.

“The symmetry of all of this is amazing,” Susan said. “I think my sister would be very proud of what I did for Roosevelt. She’s here. It was meant to be.”

Susan said she hopes the story of she and Roosevelt inspires other living donors to come forward.

Her physician Dr. Yohanathan echoes that. She said we need more “Susans” out there.

“There is no better gift than donating a kidney because your life, for the most part, will be totally normal,” Dr. Yohanathan said. “And, at Beaumont, we keep such a close eye on our donors even after surgery.”

“If there was a concern that donating would’ve affected my longevity, I would’ve been disqualified,” Susan added. “The doctors here really had my best interest in mind.”

This year is the 50th anniversary of organ transplant surgery at Beaumont, and Dr. Yohanathan said this serves as another reminder of how living donors, like Susan, truly have the power to save a life.

“Fifty years of saving lives,” she said. “That’s a really huge milestone. One we’re very proud of. I know all the people on this team are extremely dedicated to our patients and our community. And I’m biased, but I think this is the best place to get a transplant.”

Susan said she wants to leave people with these last words: “Whoever dies with the most kidneys doesn’t win. Everybody can survive with just one. God gave you a spare, share it.”

At Beaumont, we recognize and honor living donors for their ultimate act of giving. When you donate a kidney, you give someone a chance to live a healthier, longer life.

They might not be related or look much alike. They come from different backgrounds and opposite sides of the state....