For most of Sophia’s life, seizures disrupted her cognitive development and activities. At the peak of her seizure activity, she was experiencing 20 - 30 seizures a day.

Under the watchful eye of her mother, Sophia Carr, 5, took aim at the target and pulled back her bow string releasing an arrow. After two brain surgeries, her parents were relieved Sophia was back to being herself again. That includes wearing her favorite Minnie Mouse shirts, riding her bike, chasing her 11-year-old brother and coloring.

“She’s back to her normal self, but better,” said Sophia’s mom, Angie.

For most of Sophia’s life, seizures disrupted her cognitive development and activities. At only 4 months, the baby from Jackson County began experiencing seizures. At 13 months, she was diagnosed with infantile spasms – one of the most serious epilepsy conditions that can result in significant developmental delays.

“We were always on the lookout for seizures. There was always the danger of her falling,” said Angie.

Epilepsy is one of the most common neurological disorders. Abnormal electrical activity in the brain causes this disorder. The Centers for Disease Control and Prevention reports nearly half a million children in the United States and nearly 14,000 in Michigan have epilepsy. One-third have drug-resistant epilepsy.

Then, this past year the Beaumont Children’s epilepsy program purchased a leading-edge diagnostic tool, called ROSA, thanks to a gift from The Carls Foundation. Beaumont also recruited a nationally renowned epilepsy expert, Pramote Laoprasert, M.D., to lead the Comprehensive Pediatric Epilepsy Center and the Stereo-EEG Epilepsy Surgery Program.

The Carr family learned Sophia was a good candidate for stereo-electroencephalography, or SEEG, with ROSA – a robotic stereotactic assistance system. 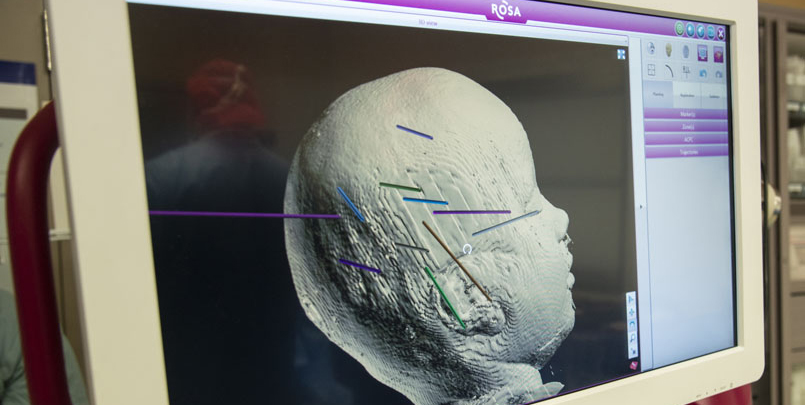 Results from the SEEG with ROSA, can pinpoint which part of the brain is responsible for the patient’s seizures and can identify tissue needing to be removed, or resected. The goal is to significantly reduce or eliminate all seizures to save the patient’s life and improve the patient’s, and their families’, quality of life.

SEEG uses robotic technology for minimally invasive depth electrode surgery. It replaces a craniotomy with smaller incisions – 2mm holes in the skull. The ROSA software enables the neurosurgeon and epilepologist to pre-plan electrode placement in the brain before surgery. Compared to traditional epilepsy surgery programs, SEEG is less invasive, safer and more comfortable for the patient.

“Precision electrode placement is critical. SEEG can identify the source of seizures deep within the brain without removing part of the skull,” explained Dr. Laoprasert. “It reduces surgery and anesthesia time. Patients experience much less pain with less medication and a faster recovery time, typically within 24-48 hours. SEEG performed with ROSA is more precise and a less invasive option of electrode placement.”

Any type of brain surgery is not without risks, but the Carrs were hopeful Dr. Laoprasert and Karol Zakalik, M.D., a pediatric neurosurgeon, could help Sophia.

Dr. Zakalik, under Dr. Laoprasert’s direction and aided by ROSA, placed 11 electrodes in Sophia’s brain this past July.

After electrode placement, Dr. Laoprasert and his team monitored Sophia’s brain activity for about seven days. The team records seizures and can stimulate parts of the brain where electrodes have been inserted to determine where seizure activities begin. In addition, they do brain mapping to locate and help preserve where good functions of the brain are stored, such as vision, language, sensory and motor tissue.

Based on the electrode data, the doctors were confident they could remove brain tissue responsible for Sophia’s seizures in a second surgery. 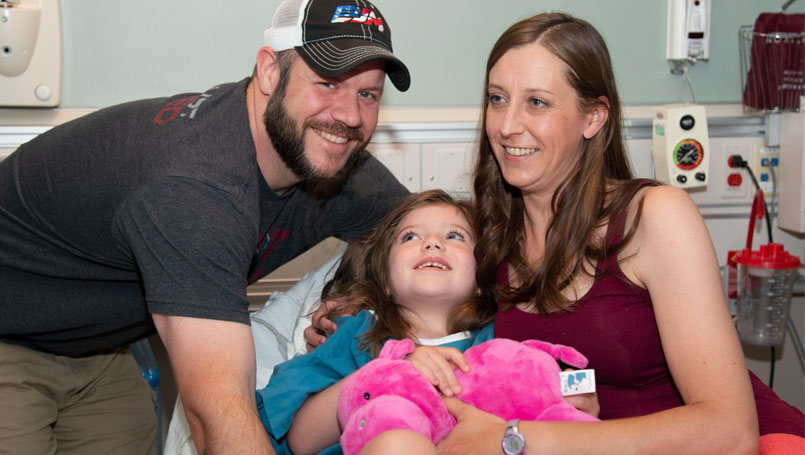 “The only surprise is how well she did after her second surgery,” Angie said. “She didn’t seem to have a lot of pain.”

Six weeks later, in early November, Angie reported, “Sophia is doing fantastic. She has been seizure free since her birthday. Her language and vocabulary are already growing.”

“Sophia has returned to pre-school and participates in all activities without any restrictions,” explained Angie. “She has played at the park, gone trick or treating and shot archery.”

Angie’s advice for other parents: “Even with the possibility that Sophia could have deficits, we knew her best outcome would come with a complete cure or a drastic reduction in her seizures. We’re hopeful for what the future brings and that epilepsy will no longer put limits on the activities she enjoys, or what she can become.”

Is life less stressful for Angie and her husband?

“Yes. I’m not any less vigilant about watching for seizures, but I don’t worry so much about Sophia falling down the stairs or off the toilet anymore,” said Angie.  “It’s surreal; I almost can’t believe it’s been two months without a seizure.”

One day, David and Kayla Carter, of Wyandotte, were mostly healthy newlyweds in their mid-30s, taking lighted tree ...