Norm Flaga, 81, of Clawson, knows a thing or two about the benefits of cycling.

Despite bumps in the road, Clawson man’s passion for cycling an amazing ride

Despite bumps in the road, Clawson man’s passion for cycling an amazing ride

Norm Flaga, 81, knows a thing or two about the benefits of cycling. At age 7, growing up in Detroit, he remembers riding countless miles on his bicycle to landmarks like Belle Isle and the General Motors Building. Bike riding gave him independence and strong legs. Because he rode so far, most of his friends and classmates declined to accompany him.

Nearly a half century later, at 55, he’d pedal from his home in Clawson out to Kensington Metropark in Milford on Sundays – about a 65-70 mile journey. Through the years, Norm rode with different cycling clubs.

After retiring, the former automotive tool and die maker rode with a close friend 25 miles every other day. That is, until his friend could no longer maintain that distance.

Bumps in the road 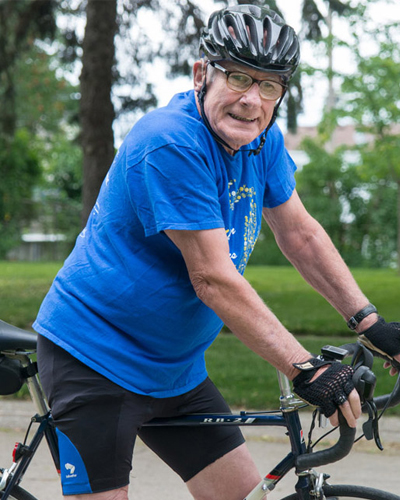 In 2002, Norm, then 66, contracted the West Nile virus. He credits his recovery to exercise and a plant-based nutrition program. During his recuperation, Norm applied the skills he honed from 39 years at General Motors and seven years with American Gear and Axle to build a recumbent trike. The trike featured his design and tooling expertise - built with custom-made parts.

At 72, he had both knees simultaneously replaced. A few months after the surgery, he was back on his bicycle. Norm recalled, “My Beaumont surgeon called me his ‘poster boy’ when he saw me on my recumbent trike.”

His rehab from knee surgery went so well that Norm took no pain medication. Again, he credited his plant-based diet. Many of the vegetables he consumes are grown in a small backyard greenhouse.

Despite his healthy lifestyle, in 2012, at age 77, an exercise stress test confirmed he had some blocked heart arteries. He underwent open-heart surgery with four bypasses. Fortunately, Norm experienced a rapid recovery and seven months later was again back on his recumbent trike. He also started riding a mountain bike.

This past year, four years after his heart procedure, Norm decided to compete in cycling at the Michigan Senior Olympics. His training included greater speed and distances averaging 25 miles. He also exercised regularly at Beaumont’s Cardiac Rehabilitation Program in Royal Oak.

“I noticed that my blood pressure, heart rate and body weight all came down,” said Norm. “My blood pressure plummeted and my resting heart rate decreased by 20 beats per minute and my weight dropped from 215 to 205 pounds.”

All his hard work paid off. Despite a mishap with his chain, Norm recovered and went on to win a silver medal in the 10K cycling event for competitors 80-84. The silver medal qualified him for the 2017 National Senior Olympics.

“This race was the hardest thing I have ever done. I am so happy and proud I accomplished what I did,” explained Norm. “Despite a few bumps in the road, it’s amazing what you can accomplish when you put your mind to it.”

While Norm, who turned 81 in May, has decided not to compete in the upcoming National Senior Olympics in Alabama, he looks forward to competing in the Michigan Senior Olympics again in August.

Norm’s advice, “If you eat healthy and train appropriately, you are never too old for a herculean physical challenge. Never give up.”

Skiers excited to hit the slopes this winter can do a few things to make their trips downhill more fun—and safer. H...