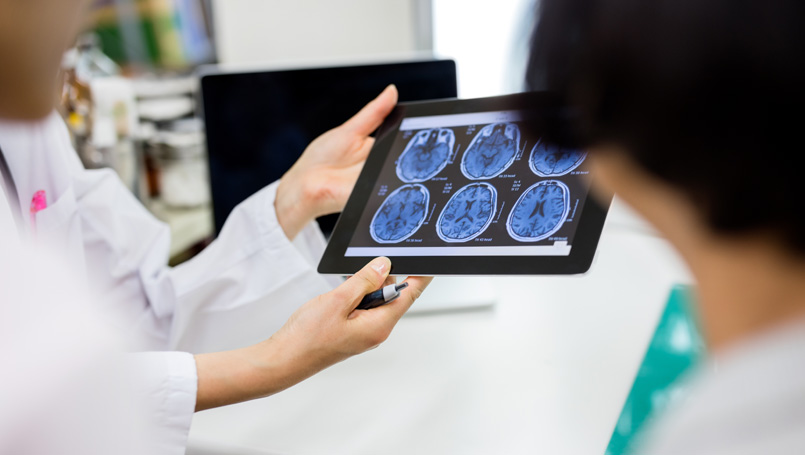 Researchers believes low-dose radiation might be a promising treatment for Alzheimer’s disease. They are now seeking patients with Alzheimer’s disease for the study.
Beaumont Health
https://www.beaumont.org/images/default-source/default-album/logo.png?sfvrsn=d43d7fef_4
...

In early pre-clinical studies, radiation was found to be effective in reducing brain plaques. These plaques are a protein, known as beta-amyloid, which accumulates in the brain. It is widely believed the buildup of beta-amyloid protein causes cognitive impairment leading to Alzheimer’s disease.

For the past seven years, a team of Beaumont researchers have been studying the use of low-dose radiation therapy to treat Alzheimer’s in several models. They have been one of the first in the world to study radiation for Alzheimer’s. The Food and Drug Administration has given them approval for a study designed to examine effects of radiation on people with moderate stage Alzheimer’s disease.

Researchers are seeking individuals with moderate stage Alzheimer’s disease for whole brain radiation treatments. Patients who meet the study criteria and are consented, will receive treatments for five consecutive days for 15 minutes or less each day. Cognitive testing, quality of life assessment, and PET scans to examine amyloid plaque will be done before and after radiation to determine if the treatment affects disease progression after four, six and 12 months. Potential toxicity will also be monitored.

Explained George Wilson, Ph.D., radiobiologist and researcher, “Currently there is no cure for Alzheimer’s, and current pharmaceuticals have had limited success. Pharmaceuticals are costly and time consuming to develop. In contrast, radiation therapy is a proven treatment for cancer and can be done safely, quickly and inexpensively.”

Beaumont researchers believe modest treatments of radiation therapy targeted to the brain might be effective at reducing beta-amyloid and the progression of Alzheimer’s, while not producing further cognitive deficits.

Alzheimer’s disease can affect a person’s ability to think, communicate, and function. It greatly impacts their relationships, independence and lifestyle, as well as their family and caretakers. The condition’s toll not only affects nearly 6 million patients and their families, but in 2019 it will cost the nation $290 billion, with that number increasing to $1 trillion by 2050.

The Differences Between Screening and Diagnostic Mammograms

There are two different types - screening mammograms and diagnostic mammograms - and some important differences bet...

After experiencing stroke symptoms this past October, Dion Powell has many reasons to be thankful.

For some patients with low to intermediate-risk prostate cancer, high-dose-rate brachytherapy is a good option.

A specialized Beaumont team has cut mortality in half for patients with potentially life-threatening blood clots.

A collaborative team of researchers from the UK and Beaumont will study the link between dementia and post-operativ...