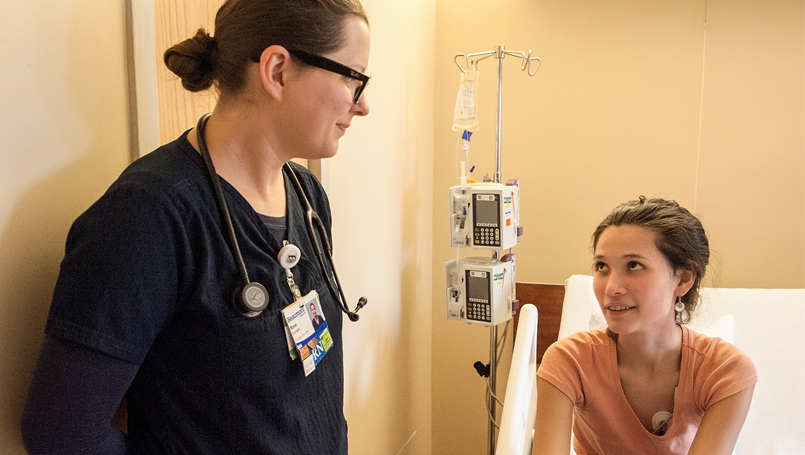 “I don’t really remember what happened on the plane,” said Urmanova. “When I got to Detroit, I blacked out.”

As a 20-year-old college student heading to Sierra Leone for a two-week study abroad program, Alfiza Urmanova was excited for the experience.

She is not new to travel experiences. Originally from Russia, with parents who are physicians, Urmanova traveled to the United States as a teenager to live with a host family in Wisconsin for middle and high school. She still attends college in the state and keeps in close touch with her Wisconsin family and sister and best friend.

When Urmanova landed in Detroit on a layover heading back from Sierra Leone, she was extremely sick.

Her serious symptoms and condition had medics at the airport consulting with the Centers for Disease Control and Prevention office at Metro Airport. With symptoms of nausea, vomiting, dizziness and passing out, she was immediately directed to Beaumont Hospital, Wayne - the designated local hospital for travelers who need immediate and critical care.

“I don’t really remember what happened on the plane,” said Urmanova. “When I got to Detroit, I blacked out.”

At Beaumont, Wayne, clinicians took immediate action. Frequent drills on treating patients with potentially infectious diseases taught them many lessons. Staff were concerned her symptoms were the cause of a serious communicable disease. They took all precautions to protect the patient and clinicians, and immediately sought the council of infectious disease physician, Hassan DaKroub, M.D.

“I immediately suggested a malaria test based on her symptoms and her recent travels to Africa, where malaria is common. It came back positive,” said Dr. DaKroub. “Usually, the initial parasite count (parasitemia) is about three percent. Her count was 19 percent in her red blood cells. This is very, very significant and very rare. You almost never see it.”

This is very, very significant and very rare. You almost never see it.

According to the CDC, malaria is a life-threatening blood disease caused by parasites transmitted to humans through the bite of an exotic mosquito. Once infected, those parasites multiply throughout the host’s body and organs, infecting and destroying red blood cells.

Dr. DaKroub explained this level of infection is extremely rare and time is of the essence. “Because she was diagnosed so quickly, we were able to start treatment immediately – and that’s how we saved her life.”

John Cargill, trauma and emergency management coordinator at Beaumont, Wayne responded as part of the special pathogen response to assist the emergency room team with diagnostic testing an patient admission.

“She was traveling alone, which added to the complexity of her illness and we weren’t sure how to contact her family,” said Cargill. “As a parent myself, I didn’t even want to imagine having a severely ill child out of the country and not knowing it. She was a very sick young lady, and when I drove home that night, I prayed for her because I wasn’t sure if she was going to survive. Later, I called back in to check on her and see how she was doing.”

While the speed of diagnosis and care by the Wayne doctors and clinicians helped save Urmanova’s life, there were other complications the staff worked hard to resolve. The patient, fluent in English and Russian, was intubated and unable to communicate. No one knew who her family was or how to contact them to make them aware of her dire situation. That’s where social media proved valuable.

Staff searched her name in Facebook. They found her photo and information that led them to her host family in Wisconsin. That family immediately flew to Detroit and contacted her parents in Russia to inform them of her health concerns.

Beaumont translation services played the next vital role in Urmanova’s care and healing.

Her father, Renat Urmanov, an anesthesiologist from Kazan, Russia, rushed to his daughter’s side as quickly as he could.

Once he arrived, Beaumont, Wayne arranged for him to stay with his daughter and identified other employees who spoke Russian to help with basic translations. They included general surgeon, Edward Mavashev, M.D., originally from Russia, who helped with translations for written prescription medications and some medical procedure explanations.

“Because I’m a doctor, I understand the hard situation my daughter was in. I was very scared and that’s why at the first opportunity, I came here to support her, to be here for her,” her father said.

Although malaria can be a deadly disease, illness and death from malaria can usually be prevented.

The CDC says about 1,500 cases of malaria are diagnosed in the United States each year. The vast majority of U.S. cases are in travelers and immigrants returning from parts of the world where malaria transmission occurs, including sub-Saharan Africa and South Asia.

Recovered from the scare, Urmanova is looking forward to some downtime with family and getting back to school. She leads an exciting life as a college student and is focused on her studies in Chinese and economics. She’s currently a sophomore and admits she still has a lot of work to do, and many additional responsibilities at the university she’s looking forward to getting back to.

“My next step is catching up with schoolwork,” she said. “I work as a teacher’s assistant in the Russian department, plus I am involved in a few extracurricular activities, such as helping organize events on campus with a committee.”

She’ll be planning the university’s annual Carnival and President’s Ball this month.

Rasa Durigon, RN, was one of the nurses who helped with some of the basic translations during the families’ hospital stay.

“I hope she continues her plans – whatever she wants to do. And I hope she keeps in touch with us and gives us updates on her health every now and again.”