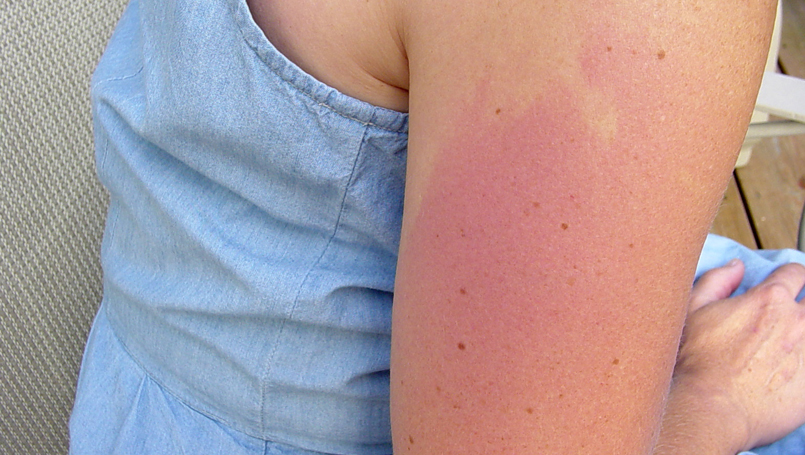 Tips for how to detect and prevent common summer skin rashes.

Summer Skin Rashes; What You Should Know

Summer Skin Rashes; What You Should Know

Ah, summertime. It’s a time of longer, sunnier days, warmer temperatures, digging in the garden, picnics and trips to the beach.

But it’s also a season that can wreak havoc on your skin, if you’re not careful. Overexposure to the sun’s rays, the combination of heat and humidity, and contact with certain plants can cause nasty skin bumps, sores and rashes.

“Spring and summer burst upon us and we’re excited to get back outdoors, and we forget certain rules we learned until it’s too late,” says Darrell Vlachos, D.O., medical director of Beaumont Urgent Care - Redford. “It’s one of those things where an ounce of prevention may be helpful.”

We spoke with Dr. Vlachos about some of the more common skin conditions found in Michigan during the spring and summer months - plus how to detect and prevent them.

The most common contact dermatitis, or skin inflammation, results from exposure to poison ivy, poison oak and poison sumac, which all contain an oily resin called urushiol in their leaves, stems, flowers and roots. It’s estimated that roughly 80 to 90 percent of people are allergic to urushiol.

“It is a rash that’s associated with chemicals that are produced by poison ivy, and contact with that causes a reaction with the skin,” Dr. Vlachos says. “Some people have a concomitant allergy, so when some people get it, it gets worse and worse. They have not only the contact aspect, but they’re allergic.”

If you’ve been exposed, you should wash the affected areas with soap as soon as possible so the oil doesn’t transfer to other parts of your body. And wash your clothes, which can also pick up the oils, to minimize spread. As hard as it is to resist itching, keep in mind that’s a primary way the oil transfers to places like your arms, neck and even face.

Dr. Vlachos also recommends over-the-counter topicals like Zyrtec or Benadryl, or 1-percent hydrocortisone creams. Calamine lotion or Aveno baths can also help provide relief. “Once the rash is really stabilized and involves a large part of your body, then you probably need to go to a doctor and get an injection of a steroid medication,” he says.

Prevent exposure by familiarizing yourself with each plant (here’s a good photo ID resource), wearing protective clothing, socks and gloves when working around the plants or hiking in areas where it might grow.

Hot and humid weather can cause sweat ducts to clog and trap perspiration under the skin, resulting in a rash that shows up as tiny bumps or blisters. It’s particularly common in skin folds or in reaction with clothes, and certain people are more prone to getting it. Heat rash usually goes away after a few days.

Dr. Vlachos recommends wearing clothes that are loose-fitting and made of breathable fabrics and avoiding tight-fitting clothes that don’t allow perspiration to escape the skin. It’s also a good idea to avoid heavy creams and oils that block sweat ducts.

Yeast likes warm, moist conditions, and infections occur in the vagina, under breasts, in skin folds and in the groin area. Infections are more prevalent with diabetics because they have more sugar available on their skin and in their perspiration.

It’s the same principle at work with athlete’s foot, a fungal infection that causes cracked, flaking and peeling skin that can take root when your feet get sweaty in closed-toed shoes.

To treat it, use over-the-counter yeast infection treatments or antifungals for athlete’s foot.

Hives is a common term for a raised red rash, or welts, that may be due to many things that can trigger an allergic reaction: animal dander, insect bites, pollen, foods and even sun exposure.

Eczema isn’t necessarily particular to any one season, but it often flares up in the hot and humid summer months. It’s defined by red, itchy and sometimes blistery skin.

Eczema often requires prescription ointments or creams to treat. Dr. Vlachos recommends people who have it establish a game plan with their primary care doctor about what to do during an outbreak.

Sunburns result from too much exposure to ultraviolet light from the sun. It’s damage to the skin, just like a first-degree burn, and the skin often sloughs just like it does in other types of burns. Repeated exposure can damage skin or cause certain diseases, including skin cancer.

“Since skin’s a barrier for us to prevent fluid loss, if you burned badly enough, it can cause significant problems for you,” Dr. Vlachos says.

You can minimize your risk be applying sunblock or sunscreen with an SPF of 15 or higher, wearing a wide-brimmed hat and clothing that covers the skin, and avoiding exposure during the hottest parts of the day, generally between 10 a.m. and 4 p.m.

What Is Monoclonal Antibody Treatment and When Is It Needed

One treatment available for COVID-19, that may help reduce the severity of illness, is called monoclonal antibody t...