The $160 million project includes 193,000-square-feet of new space. More than 61,500-square-feet of existing space on the campus will also be renovated.
Beaumont Health
https://www.beaumont.org/images/default-source/default-album/logo.png?sfvrsn=d43d7fef_4
...

Largest construction project on the hospital’s campus in 20 years

Construction crews hoisted the final steel beam into place on Beaumont Hospital, Farmington Hills’ new tower this afternoon as part of a “topping off” ceremony. The $160 million project includes 193,000-square-feet of new space. More than 61,500-square-feet of existing space on the campus will also be renovated.

“We are excited about how this project will benefit our patients and families. The innovations and additional space will allow us to better deliver our promise of compassionate, extraordinary care,” President Connie O’Malley, RN, said.

The expansion and renovation of the hospital’s East Pavilion includes: 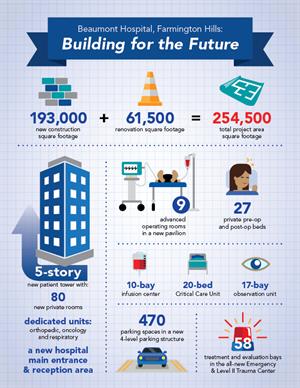 Beaumont Health is investing $150 million in the project, the largest expansion on the campus in more than two decades. The health system will rely upon charitable giving to raise the remaining $10 million needed to complete the project.

“So far, we have raised $5 million. We’re halfway to our goal. We are talking with community leaders and working to raise the rest of the funds,” O’Malley said.

Construction on the existing East Pavilion and new South Tower runs through the end of this year. Renovation of existing space will conclude in late 2019.

As part of this project, a 473-space parking structure opened in October 2016. A new power plant that is 30 percent more energy efficient than the previous plant will be complete in March.

Study: Health care employees hesitant about COVID-19 vaccine got the shot out of concern for loved ones, community

Some health care workers are hesitant to get the COVID-19 vaccine, and it would be beneficial to address their conc...

Corewell Health East is experiencing high volumes of patients with respiratory viral illnesses, including an influx...