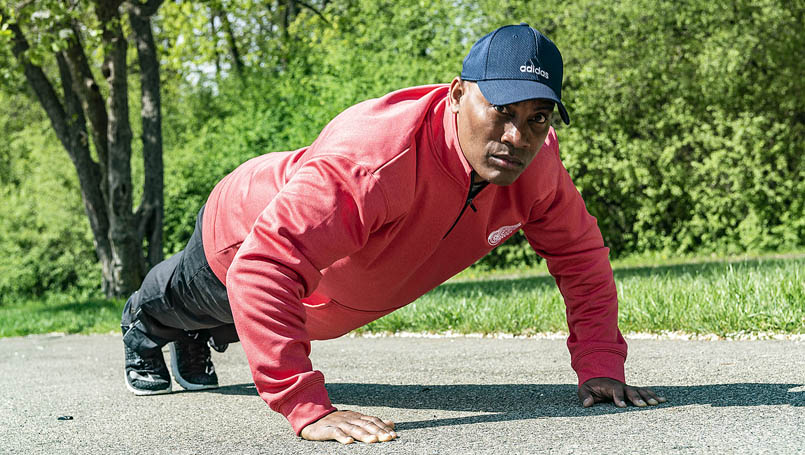 Keith first sensed something was wrong waking up early one Saturday morning with weakness in his left hand.

A U.S. Marine Corps veteran, Fiat Chrysler assembly line worker, husband and father of three - Keith Tatum, 47, of Beverly Hills, understands the importance of living a healthy lifestyle. Although his stubbornness may have gotten him in medical trouble, his dogged Marine Corps determination helped him make healthy choices and rebound.

Tatum, who has a family history of stroke, first sensed something was wrong in August 2016. He remembers waking up early one Saturday morning with weakness in his left hand as he drove his youngest son to his job. He ignored the sensations and, upon arriving home, went back to bed.

“I was in denial,” Persian Gulf War veteran Tatum said. “I was overweight and had high blood pressure and high cholesterol. I didn’t have a family doctor, because I didn’t want to hear bad news. I got lazy.” It was Tatum’s wife, after coming home from work that day, who insisted she drive him to the hospital.

Upon arriving at Beaumont Hospital, Royal Oak, doctors determined he experienced an ischemic stroke. Sunitha Santhakumar, M.D., vascular neurologist, explained, “Because he was not seen shortly after his stroke symptoms were identified, he was not a candidate for the ‘clot- buster’ medication, tPA or a blood clot retrieval procedure. He was started on aspirin, cholesterol and blood pressure medications and underwent extensive neuro rehabilitation.”

“I had to go through a lot of therapy so I could return to the line at Fiat Chrysler,” Tatum said. “The strength in my legs returned quickly, but my left arm and shoulder took a long time to fully recover.”

He underwent intensive inpatient and outpatient physical/occupational and speech therapy.

“The doctors and therapists had me do a whole bunch of different exercises using various machines,” explained Tatum. “They even put an oven mitt over my right hand to force me to use my left hand and arm.”

The recovery for any stroke can be difficult, but his resilience brought on by his Marine Corps mindset inspired Tatum to fight for his recovery. Dr. Santhakumar said, “Keith is a model patient. He was motivated to recover from day one, never missing a rehab session or a doctor’s appointment and going to the gym regularly.”

Today, Tatum can perform all the activities he was able to do before the stroke, and more. He takes care of his health by following the suggestions of his new Beaumont medical team – a family physician, cardiologist, neurologist, physical therapists and occupational therapists –  taking his medication, watching what he eats and exercising every day. 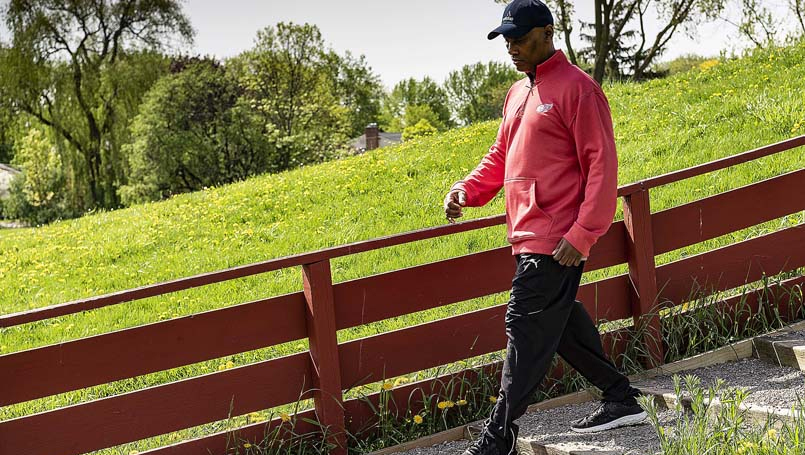 He has shed more than 50 pounds and now runs two miles multiple times a week, which was not possible before his stroke.

“I wouldn’t accept no,” Tatum said. “I needed to push myself each day.”

Five months after his stroke, he was back on the job at Fiat Chrysler.

“I thank God, my wife, mother, family and everyone at Beaumont for the incredible support I have received,” said Tatum. “This whole experience was a big wake-up call. I felt as though I had let my loved ones down, but I will not quit, I will keep working at taking care of myself and staying healthy to prevent something like this from happening again.”

May is Stroke Awareness Month and the stroke coordinators at the Comprehensive Stroke Center at Beaumont Hospital, Royal Oak encourage community members to know the warning signs and treat a stroke as a true medical emergency.

According to the American Stroke Association, each year nearly 795,000 Americans experience a stroke. It is also estimated that 6.8 million Americans live with the effects of stroke.

“Time is brain. It is extremely important to seek medical attention immediately to determine if you are a candidate for stroke interventions,” said Wendy Carriveau, stroke co-coordinator of the Comprehensive Stroke Center at Beaumont, Royal Oak. “If you suspect someone is experiencing stroke symptoms, the most important thing is to recognize the symptoms by thinking FASTER and to call 911 immediately.”