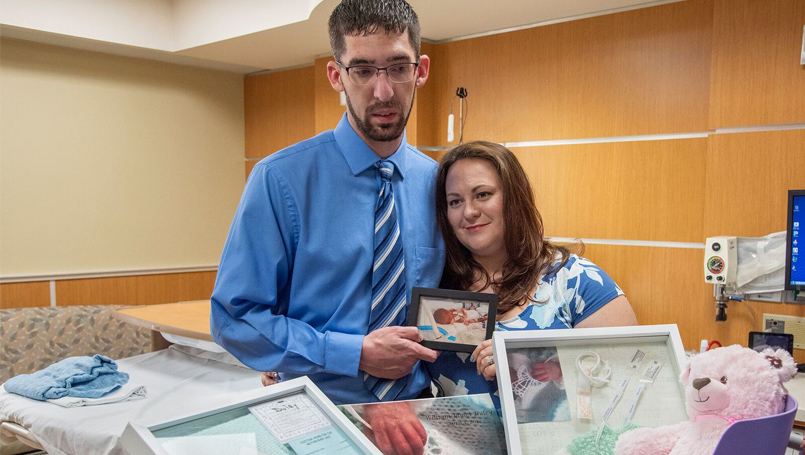 “I wanted to do something that would honor my son and help other families who have lost an infant."

“I wanted to do something that would honor my son and help other families who have lost an infant."
Beaumont Health
https://www.beaumont.org/images/default-source/default-album/logo.png?sfvrsn=d43d7fef_4

The death of an infant is a profound loss, and one of the most devastating experiences a parent can face.

In 2010, Scott and Alison Duley of Wyandotte, in their mid-30s at the time, decided to expand their family. After years of fertility treatments and specialized medical care following two miscarriages, they finally sustained a pregnancy and were expecting a boy.

Sadly, the Duleys were only able to be with their premature son for a week before he passed away.

The Caring Cradle is a temperature controlled cooling unit that allows families to spend more time with their child. The cradle is $4,000. According to Scott, it was an affordable way for them, and other families like theirs, to give back and help others.

Metro Detroit Share, a local pregnancy and infant loss bereavement support organization, suggested the cradle donation to Beaumont and its dedication to William. The couple’s donation was matched by Scott’s employer, Webasto Convertibles USA Inc., which helped with the purchase of the cradle, and subsequent donations, through a matching funds charitable program available to their employees.

Angela Winton, founder of Metro Detroit Share, was inspired to start the organization by the loss of her own daughter, Brooke Marie, in 2005. The group, founded three years later, offers services that are intended to help families while bringing more awareness about pregnancy and infant loss.

“We put our resources where they’re needed the most,” said Winton. “Beaumont Hospital in Dearborn was chosen as our first location because of its many bereavement resources and the number of high-risk patients treated.”

The journey to become parents

According to the Centers for Disease Control and Prevention, nearly 4 million babies are born in the U.S. each year. There are about 23,000 infant deaths that occur before the child’s first birthday and another 24,000 parents experience the loss of a baby due to stillbirth. Experts say the death of a baby is especially difficult to endure because parents envision an entire lifetime for their baby, from the moment of the confirmation of the pregnancy.

The Duleys did not expect to have complications getting pregnant, or that the journey would take three years before they succeeded in sustaining a pregnancy.

“It really took a toll on us mentally and physically every time we experienced a loss,” said Scott. “But, we held out hope, and we were ecstatic when we learned Alison was pregnant.”

Specialized care for a premature birth

It wasn’t until 12 or 14 weeks later when high-risk pregnancy physician, Sara Garmel, M.D., noticed William was falling off the growth curve. At first, he was a day behind – then a week – then two weeks. Before long, he was a full month behind the typically developing growth schedule.

“The doctors said intubating him was a significant risk because of his small size,” said Scott. “But, my wife said if we even had a one percent chance, we were going forward.”

“My wife was so brave. She was on the operating table, staring at the ceiling and asking me if they got the baby intubated. I am watching all of this with several doctors in the room working so hard to keep him alive,” he said. “I couldn’t bring myself to tell her what was really going on, so I told her he was OK and in good hands.”

Following his birth, William was rushed to the Neonatal Intensive Care Unit at Beaumont Hospital, Dearborn and was put on a ventilator to help him breathe. He didn’t have time to fully develop in the womb, so his lungs and digestive system were significantly underdeveloped.

“My wife was ecstatic to be a mother, and was fully happy with the decision she made to deliver William and help him receive treatment. For us, it was the right decision.” 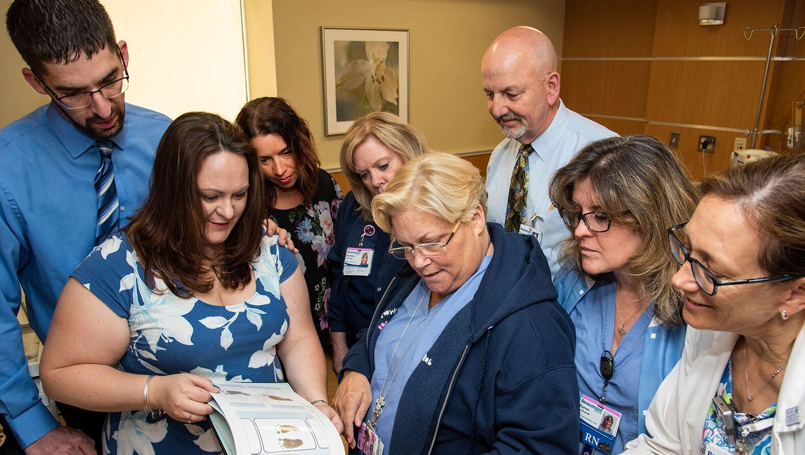 On April 10 – a week after William was born – they received a call at 9 a.m. from neonatologist William Clark, M.D. in the NICU, who said that William had a rough night.

Scott asked “How bad is this, do we need to be up there right now?”

“Yes, you should probably hurry.”

“I remember when the doctor on duty administered the last drug and they didn’t get the response they were looking for. I looked over at him and I said “That’s it, isn’t it? And he said, ‘Yes.’”

“So I walked over to the incubator and William looked up at me and that’s the first time he had his eyes open, and he had my eyes. So I called my wife, I said honey come over, and as soon as he heard her voice, he turned and looked straight at her and smiled. That was the only smile we got. And then they gave us a private room to say goodbye.”

Helping other families through William’s legacy

“It is common for parents to grieve not only for the loss of their baby, but also for the loss of the dream of parenthood,” said Darlene Bacyinski, nurse educator and infant bereavement program coordinator, Beaumont Hospital, Dearborn.

“It's crucial to find social support for your grief,” said Winton. “Acknowledging your baby's death - as well as your lost hopes and dreams for the baby's future - is an important part of the grieving process. Although nothing can take away the pain or fill the baby's place in your heart, it can help to acknowledge your grief and share feelings with others who've had similar losses.”

The Caring Cradle was not yet an option at the time for the Duleys in 2014, but now they want to ensure other families are able to benefit from their loss.

“It is difficult for families when a pregnancy doesn't go as expected. It is unimaginably difficult when the pregnancy ends with a stillbirth or neonatal death,” said Dr. Garmel. “For some of these families, a Caring Cradle will enable them to spend more time with their baby before final arrangements are made. We appreciate the Duleys’ efforts to make this incredibly trying time easier for families in the future,” said Dr. Garmel.

“If it helps one family feel like they’re not alone, we want to do that,” added Scott. “We want a legacy for William. We didn’t have the money or resources to start a charity of our own, so Metro Detroit Share and my employer helped make it possible, and affordable, for us to be able to honor of our son.”

The Duleys attempted pregnancy again and sadly experienced four additional miscarriages. They have made peace with the past and are now excited to be 26 weeks pregnant with a girl.

“It’s been a long road. We are still a bit guarded, but we are so excited for the birth of our daughter,” said Alison. “We decided to name her Evelyn, which means “wish for a child.” She is due in September and we can’t wait.”

She added, “I have never seen more caring doctors and nurses that have been so willing to go above and beyond to make sure that my husband and I were taken care of through this whole journey. Without them, we would not have had the time we had with our son, and we would not be currently expecting our daughter.”

The Caring Cradle is now in use at Dearborn as part of the infant bereavement program. Beaumont Hospital, Troy recently received one as a donation by a local family as well.

Beaumont Hospital, Dearborn has an extensive program with support services available for patients and families who have experienced the loss of an infant. The infant bereavement program offers families the following:

What science knows - and doesn’t know - about miscarriages

Roughly a quarter of all women experience a miscarriage during the lifetimes.

How Your Partner can Support Breastfeeding

Support people can provide a secondary comfort outside of breastfeeding.

1st baby born in the new decade at Beaumont

New and expectant parents, and their family and friends, are invited to attend Beaumont Children’s annual baby fair...

“I wanted to do something that would honor my son and help other families who have lost an infant."