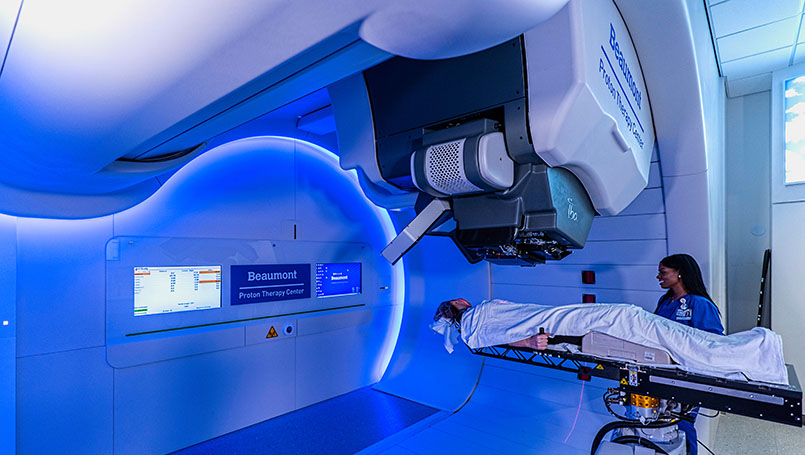 “We are grateful to celebrate our five-year anniversary of providing this advanced treatment for patients across Michigan, the Midwest and even as far away as Hawaii,” said Dr. Craig Stevens, chairman of Radiation Oncology at Beaumont. “However, we aren’t standing still. Our team continues to develop new ways to make proton therapy even better: faster, more accurate and with less side effects.”

With five years’ experience treating patients with proton therapy, the center is in the process of installing more advanced technology to shorten treatment time. Patients lie in what resembles a CT scanner for the treatment, which typically takes 20 minutes to an hour. Most patients listen to music and don’t feel anything as the therapy takes place.

In proton therapy, proton beams enter the body and deposit most of their energy directly into the tumor, delivering higher doses of treatment directly to the cancer. One of the most precise and advanced treatments available, proton therapy protects healthy tissue and critical organs near the tumor from excess radiation. For pediatric patients, this means less damage to growing organs; for breast cancer patients, it means a decreased risk of heart and lung damage due to radiation exposure; and for patients who have already received previous radiation therapy, proton therapy may be their only treatment option.

Metro Detroit trial attorney Paul Reasoner calls proton therapy “incredible,” after it helped him avoid traditional radiation and preserved his voice during treatment for throat cancer. He had reeled from the February 2021 diagnosis of squamous cell carcinoma after noticing a lump in his neck. It turned out to be a lymph node affected by throat cancer originating on his tonsil. 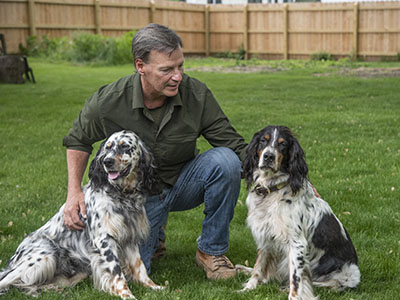 After consulting multiple leading cancer centers in the United States, he was directed to Beaumont’s Proton Therapy Center.

“My voice to me is like the fingers of a pianist or a surgeon,” Reasoner said. “This diagnosis was potentially devastating. And when I researched it, the proton treatment – the real reduction of side effects – was key for me.”

“It definitely decreased the radiation dose to the voice box and swallowing muscles, so it reduced the chance of side effects, like a hoarse voice or swallowing difficulties,” said Reasoner’s radiation oncologist, Dr. Rohan Deraniyagala, fondly known as Dr. Derani, medical director of the Beaumont Proton Therapy Center. “Patients are seeking out this type of care because it targets the cancer and results in fewer side effects.”

Reasoner hoped a hunting trip in northern Michigan would help him get back to full strength after a summer of head and neck cancer treatment in 2021. That walk through the woods turned into a multi-state healing odyssey.

“I asked if I could walk along. I said, ‘I’ll leave my gun in the car – I’m really recovering from cancer treatment,’” Reasoner said he explained to the man in the woods near Grayling. “He said, ‘First time? Come along; walk with me.’ It was his third.”

Several miles later, the man invited Reasoner to his home in West Virginia – and to visit with a family whose patriarch had just died after a three-year fight with an aggressive form of prostate cancer.

The patriarch left two prized Llewellin English setter hunting dogs – and his wife and daughter were worried about what to do with the dogs. Breeders and show dog enthusiasts had expressed interest, but the owner balked.

“He said, ‘Don’t give them these dogs – these dogs want to be running around in the woods with some guy,’” Reasoner said. “Before he died, he told his family, ‘I’ll send you someone.’ His daughter’s name is Nicola, my daughter’s name is Nicola. I drove to West Virginia, waiting for the results from my first CT scan, to see if the cancer was gone. And when I got there, these highfalutin hunting dogs jumped in my car. His wife and daughter said they’d never seen anything like it.”

Walking Skate and Dags twice a day – and knowing he’s been declared cancer-free from his head and neck cancer – have helped Reasoner recover.

“I want to give people hope,” said Reasoner. “That proton beam is incredible."