With the help of peers at Groves High School, volunteers, family and friends, Eve collected nearly 17,000 Band-Aids this year to donate.

“I just slept a lot more than the average kid,” Collon said. “Even with eight hours of sleep at night, I was constantly taking naps.”

Throughout her teen years, Collon became a regular at the Beaumont Pediatric Oncology and Hematology clinic in Royal Oak, where she would receive infusions to bring her blood levels up. 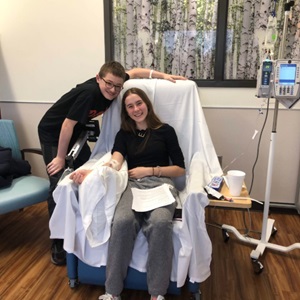 “My first couple visits to the clinic, I would get blood draws, and I was always presented with a selection of Band-Aids to choose from,” Collon said. “There were always fun colors or princess-themed Band-Aids. They signified some excitement at the end of a not-so-exciting procedure.”

Collon said she just assumed the pediatric clinic had loads of fun Band-Aids on hand for kids. But after a conversation with one of her nurses, she learned that they only have character Band-Aids if they’re donated.

“I began thinking about the kids who were younger than me coming into the clinic, not knowing how many times they’re going to get poked or if they’re going to get good or bad news,” she said. “The one thing that they can really have some control over is picking out a Band-Aid.”

Collon knows firsthand the impact something as simple as choosing your own bandage can have on a child. She recalled an interaction she witnessed between two 5-year-old kids at the clinic.

“One ran over to the other and said, ‘I got a Tonka truck today. What did you get?’” Collon said. “The little girl then said, ‘Oh, I got a My Little Pony!’”

Collon said it was beautiful to see how a little Tonka truck Band-Aid could trigger such a purely innocent and positive interaction between the pair.

“Whether they pick one with a dog or a superhero, it really gives them something to focus on and helps to take their mind off the scary procedures,” she said.

With the help of her peers at Groves High School, fellow Beaumont volunteers, family and friends, Collon collected nearly 17,000 Band-Aids this year to donate to the clinic, featuring superheroes, Paw Patrol characters and princesses like Anna and Elsa.

Collon said she also collected several skin-colored Band-Aids, which include different shades of black and brown.

“We have Band-Aids for people with darker skin tones, which I think is really neat because if they’re not necessarily comfortable sharing what they’re going through or they want to be more private about their condition, these Band-Aids can blend in and maybe even help them forget that they have a Band-Aid on their finger,” she added.

Nurses said a donation the size of this one will supply Band-Aids to kids for about a year-and-a-half, as they use about 1,000 bandages a month at the clinic.

“It's difficult to be constantly poked, as some of our children often are, and having the variety of character Band-Aids for children to choose from honestly makes a difference and puts a smile on their faces,” Rose Freigeh, a certified child life specialist at Beaumont Children’s, said. “I know our nurses and phlebotomists are grateful to have these in their daily practice. It's even more meaningful when one of our own patients want to give back in this way, so we are tremendously appreciative for Eve's donation.”

In 2021, Collon collected about 11,000 Band-Aids for her first bulk donation to the clinic.

Not only does Collon plan to continue to collect and donate character Band-Aids, but she also has plans to attend the University of Michigan’s nursing school in the fall. Her hope is to go into pediatric oncology and hematology.

If you’re interested in donating, you can email Eve at EveKate31755@gmail.com.