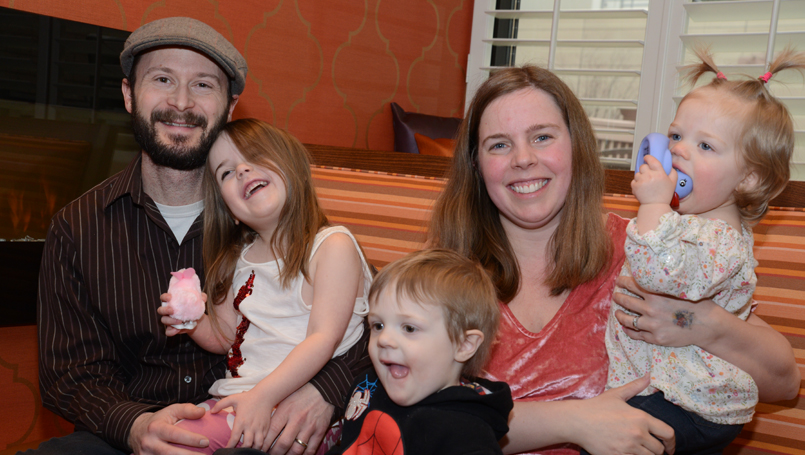 Kim Elliott’s first labor and delivery experience back in 2013 in southern California was an exercise in frustration.

The natural birth enthusiast and mother-of-three was told: “We’ll see who wants pain medicine after laboring for 24 hours” by her then obstetrician-gynecologist. “You don’t have to be a hero, you know,” he added.

“I was so mad,” Elliott recalled. “He said these things without spending any real time with me or hearing why I wanted to have an unmedicated birth."

Shortly after giving birth to Baby Cordelia in 2013, Elliott learned the hospital where she delivered had one of the highest C-section rates in the state.

By the time she was ready to give birth to Baby No. 2, Ellis, in 2015, Elliott and husband Mark were back home, living in Shelby Township and fully educated on the values upheld by the staff at Beaumont Hospital, Royal Oak’s Karmanos Center for Natural Birth.

“I knew this was exactly what I wanted to do,” Elliott said. “What especially appealed to me was having so many options. I didn’t have to take medication. I didn’t have to be connected to any monitors. I could walk around the garden, labor in the tub, use the birthing ball or lay in bed.”

Sipping water, for example, is allowed, so is using the TV. Elliott further enjoyed the comfy, queen-sized bed her husband could share with her during the night after delivery. The Karmanos Center's garden view provided a comforting distraction as did the sunlight that poured in through the windows, in combination with the natural beauty of the entire space.

“The biggest positive, however, was the attitude of the entire staff. They were so kind, supportive and understanding,” Elliott said. “At that first hospital, everything was a big fight. Here, I felt heard and respected.”

“Some patients who are medically managed feel like they’re on an unnatural timetable,” Thornton said. “There are blood pressure cuffs and monitors going off and a whole lot of medical-ness. In contrast, we give our moms ‘time.’ And the freedom to move around. They’re allowed to have things to eat. It’s just a totally different experience. They are in control.”

Tracie Achrem, another one of Elliott’s midwives, said Beaumont' natural birth patients experience the best of both worlds.

“The Karmanos Center for Natural Birth provides the perfect environment for natural birth, but with full, labor and delivery resources right outside the door if we need them,” Achrem said.

The Karmanos Center for Natural Birth opened in November of 2014 as the result of a seven-figure gift from Danialle and Peter Karmanos Jr.

The physicians focused on how Black women dealt with getting screened and unique issues relevant to them.