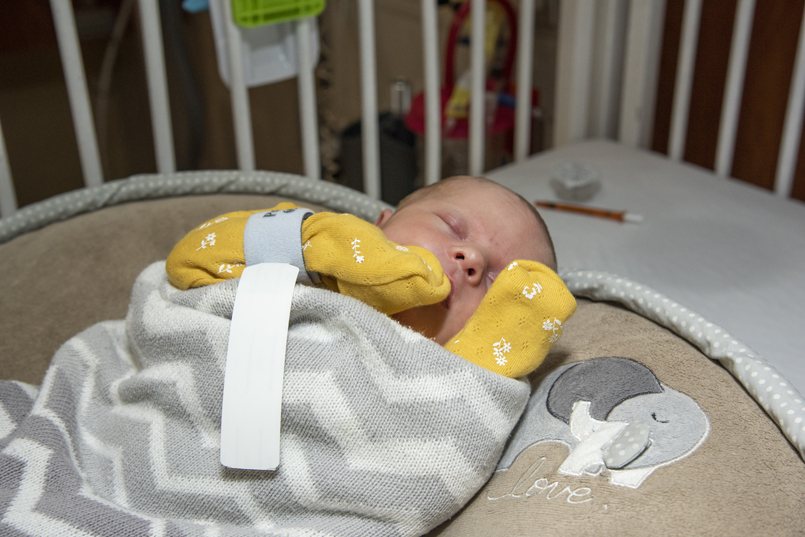 When the couple found out they were pregnant earlier this year, they knew there was a 25% chance the baby would be SMA positive. Without medical intervention, children born with the most serious types of SMA often die within their first year of life.

From A to Zolgensma: Siblings receive life-saving SMA therapy at Beaumont Children’s

Christmas is a magical time for most young families, but the Colone-Garcia family of Livonia is especially grateful to be celebrating the season happy, healthy and at home all together this year.

And baby Olivia is celebrating her first Christmas.

The smiley three-month-old was diagnosed in utero with spinal muscular atrophy.

SMA is a rare and debilitating genetic disorder that destroys the muscles and nervous system.

“I bought stuff to make Christmas cookies, we’re going to be decorating the tree and have even talked about walking around the zoo to see the lights,” Colone said happily. “It’s a different kind of year for everybody for sure, but it’s nice to be on that same track.”

For the last three years, things have been anything but typical for the Colone-Garcia family.

Jaxon was also diagnosed with SMA in utero.

So, when the couple found out they were pregnant earlier this year, they knew there was a 25% chance the baby would be SMA positive. Without medical intervention, children born with the most serious types of SMA often die within their first year of life.

In February, the couple arranged for a screening blood test for their unborn baby. When the results came back positive, they allowed themselves to grieve. But, only briefly.

Then, they got to work.

“Of course, we had hoped for a different result,” said Colone, a third-year nursing student. “But, at least this time, we knew the path we had to take to recovery.”

That path is a $2 million drug protocol known as Zolgensma. Beaumont Children’s is one of just four health care organizations in Michigan to offer the infusion therapy in partnership with Michigan Medicaid and the support of a specialty drug pharmacy.

Although it’s not a cure, the one-time only therapy works by producing and distributing a copy of the SMN1 gene to the patient through an intravenous injection, delivered inside an adenovirus vector.

In other words, the adenovirus acts as a delivery system, transferring the gene copy to the patient, which then provides the mechanism necessary to transcribe existing genes into protein. Without these proteins, the motor neurons in the spinal cord die and the muscles atrophy.

Approved by the FDA in May of 2019 for SMA positive children under the age of 2, Zolgensma is a game changer, said Beaumont Children’s Dr. Meghan Harper-Shankie, a pediatric neurologist, and Olivia’s doctor.

According to Cindy Rios, Market Chief Financial Officer for Beaumont Health, “With the backing of the specialty pharmacy – and so far, they have approved every request – we can work with families to make this happen. Our physicians are very passionate about getting this therapy to those who need it.”

Best outcomes, however, Dr. Harper-Shankie stressed, are affected by timing.

“The sooner a child receives Zolgensma, the better,” she explained. “The more motor neurons you save, the greater the function. Once those neurons die, you don’t get them back. Children with the most severe cases of SMA never roll over and typically die from respiratory complications.”

Colone’s assertive and informed advocacy, with the support of Beaumont Children’s clinical and administrative team, made all the difference, Dr. Harper-Shankie stressed.

“Olivia would not have received this drug as quickly as she did if Victoria was not so on top of things,” Dr. Harper-Shankie said. “She asks all the right questions. She’s active in the SMA groups. She did a lot of planning to make sure Olivia got the medication as soon as possible.”

“We had ample time to set things up locally and submit the paperwork to make sure everything got through Medicaid as fast as possible,” Rios said.

Colone even made arrangements with her OB-GYN three days prior to her scheduled delivery to have the amniotic sac around her cervix “swept” in hopes of precipitating an early delivery to avoid lab delays related to the Labor Day holiday. It worked and Olivia was born two days early on Sept. 2.

After Olivia’s birth, the Beaumont team leapt into action once again, conducting a baseline physical therapy assessment and drawing all necessary bloodwork to ensure Zolgensma would be safe and effective. This meant sending samples out of state for special analysis and meeting tight deadlines to stay on track for the pre-set infusion date.

With Dr. Harper-Shankie’s nursing team working around the clock in the week leading to the infusion, the full report was delivered to Michigan Medicaid the night before; at which point staff there worked into the night to approve coverage. The next day, the drug manufacturer flew the medication, encased in a temperature-controlled vial, to a specialty pharmacy in Novi, with strict instructions about cooling and storage. Once it arrived at Beaumont, preparation was conducted under a special laboratory hood – of which the department has only one – through an expert team of pharmacists. In Jaxon’s case, there was difficulty placing the I.V., so a second specialty team was primed to provide back-up, just in case.

“There was a lot of focus on logistics and scheduling coordination for Olivia, it was like planning a wedding,” Dr. Harper Shankie said. “Pharmacists, medication transporters, physicians and everyone who handled the drug had to be suited up under special protocol, wearing specific layers of personal protection equipment to avoid exposure to the virus material.

Now, three months later, Olivia 11 pounds, 2 ounces and, according to her mom, “is growing like a weed.”

“She’s very nosy and likes to stare at us, especially Jaxon,” Colone said proudly. “She’s also cooing and isn’t afraid to let us know if we aren’t loving on her enough.”

Like many new babies in the COVID-19 era, Olivia was also in strict quarantine, particularly during the first 30 days after receiving her infusion. In addition to COVID-19 prevention, Olivia was treated with a steroid that suppresses the immune system. A protective blanket covered her on route to the doctor’s office. Everyone in her presence wore masks at all times and she could not eat or taste food from other people’s forks/utensils.

Victoria was also vigilant about protecting others from exposure to the carrier virus, shed through Olivia’s secretions. This meant wearing gloves during diaper changes and double bagging diapers, considered a biohazard, to prevent others from being exposed to antibodies which would preclude children who need Zolgensma in the future from receiving it.

“And now that all of that is behind us, it’s flu season,” Colone said with a laugh. “So, we’re back to square one in terms of quarantining.”

“That little boy runs around my office like a mad man,” Dr. Harper-Shankie said with a laugh. “It’s amazing to see. Last time he was in, he was literally climbing on the table. We couldn’t keep him down. Without treatment, this child would have been immobile.”

When Jaxon was born in 2017, Spinraza was the newest innovation, just approved in 2016 to treat SMA. While Zolgensma provides the recipient with a functioning SMN1 gene, Spinraza works on the SMN2 gene, modifying it, and increasing the protein it produces.  Unlike Zolgensma, Spinraza is administered every four months, at a cost of $400,000 per treatment, significantly more expensive than Zolgensma over an SMA child’s lifetime

The treatment successfully preserved Jaxon’s neurons and muscles, paving the way for the next wave of treatment, Zolgensma, approved May 24 of last year for children under 2 – three months before Jaxon’s second birthday.

With less than 90 days to make things happen, Colone worked with Beaumont Children’s pediatric neurologist Dr. Eileen McCormick, who has since retired, and the team at Beaumont Children’s so that Jaxon could be infused with Zolgensma seven days prior to the cutoff date, his second birthday, Aug. 28.

Severe jaw misalignment, which may or may not be related to his SMA prevented Jaxon from breathing, eating and speaking comfortably. With reconstruction surgery at Michigan Medicine now under his belt, Jaxon’s doctors are confident he can catch up to his peers and resume his happy and active lifestyle.

“Although Spinraza and Zolgensma are both newer drugs and much still remains to be seen, these are opportunities this family and others never had before,” Dr. Harper-Shankie said. “It’s a big deal. There’s a lot of hope for the future and a truly amazing outcome.”

The timing of their arrival and the transformation the drugs delivered is not lost on Colone and Garcia.

“So many, many people worked hard for our children to have this quality of life,” Colone said. “It means so much to us that not one, but both of them were treated early and have great prognoses. To say that we are blessed is an understatement. We could not be more ecstatic.”
view all stories