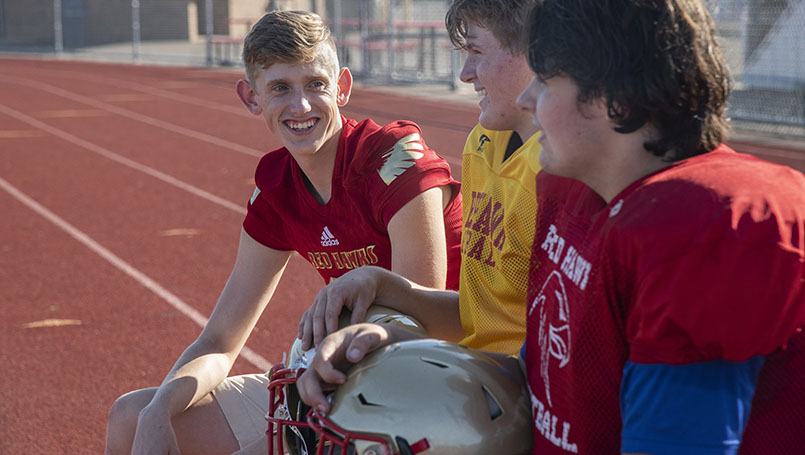 Although Grant can’t return to the football field this season, he will be able to resume other normal activity within four weeks.

High school football player’s lung collapses during first game of season. Here’s what he’s doing to get back

Grant thought life as he knew – and loved – it was over when he heard someone say he should never play football again. It was the day he had surgery at Beaumont Hospital, Royal Oak.

His parents, Frank and Betsy Vande Kerkhoff had just rushed him to the emergency center when he felt an all-too familiar pain in his right side during the first game of the 2019 football season.

“I can’t imagine not playing sports,” said Grant, a junior, who was first diagnosed with a spontaneous pneumothorax when his left lung collapsed last spring while running across the baseball field.

“It’s definitely a big part of who I am,” he added.

The condition, often found in tall, thin, teenage males, causes tiny blebs or blisters to randomly develop on the lungs. When the blebs rupture, the coinciding air leak and pressure causes the lungs to collapse.

Although Grant can’t return to the football field this season, according to Beaumont pediatric surgeon Dr. Begum Akay, he will be able to resume other normal activity within four weeks, and come off the bench for winter sports by year’s end.

“The whole purpose of doing surgery is to let him live his life,” Dr. Akay said. We need him to recover first, but after that, I do not anticipate him having any restrictions. We don’t want him to not do things because he’s afraid it will happen again. I totally anticipate him having a normal and fulfilling sports experience.”

Grant later learned the voice he heard on surgery day who said he should never play football again was a family friend who did not fully understand his condition.

“We don’t really know if sports or activity causes the blisters to rupture,” Dr. Akay explained. “When it happens, a lot of my patients are just sitting on the sofa, watching TV.”

The first time Grant’s lung collapsed this past April during a junior varsity baseball practice, he thought he pulled a muscle and came home complaining of a sharp pain in his side. Then he went to bed.

In the morning, he felt worse.

In addition to the pain, he was also fatigued and had difficulty breathing. Grant’s pediatrician thought he might have the flu, but then an X-ray revealed something more serious – a collapsed lung.

As a result, Grant sat out the remainder of the baseball season. Soon afterwards, the same thing happened to his right lung, then again to his left.

Each time, Grant required chest tube placement to remove the excess air in the chest cavity thereby allowing his lungs to fill again. Following recurrences, he required surgery to remove the blebs and a procedure to help the lung attach to the chest wall in hopes of preventing future recurrences.

Eventually he was cleared to resume normal activity and he and his family crossed their fingers and hoped it would never happen again.

Gradually Grant was able to return to his travel baseball team before joining the varsity football team for summer conditioning.

“I was just starting to feel like everything was getting back to normal when it happened again,” Grant said.

Grant’s mother, Betsy, has unfortunately seen it all and more.

Her oldest son, Adam, now 23, was told he could not play contact sports due to a genetic heart condition.

“Adam is very athletic and loves football, he was very good at it,” Betsy Vande Kerkhoff said. “It kind of crushed him for a while.”

After that, middle son Nick, now 22, picked up the athletic torch.

Nick also loved football, played for Athens and received scholarship offers from various smaller colleges. He eventually chose academics over athletics to follow his dream of becoming a pediatrician.

“We definitely have a sports tradition in our family,” Grant said. “All three of us love the game and love to play. My brothers have always encouraged me, making sure I never gave up. But I’m not doing this for my family. I’m doing it for me. I want to have fun and do the best I can. And I want other people with this condition to know they can do the same.”

Betsy said she is happy to know others who share Grant’s diagnosis have gone on to enjoy successful careers in sports and the military.

“We know Grant wants to play,” she said. “Our goal is to support him in any way we can.”

Later this fall, Grant plans to return to the basketball court with his Troy recreation team. Come spring he’ll try out for varsity baseball and if all goes well, he’ll be back on the football field for his senior year.

Dr. Akay said the way Grant is handling his diagnosis is an inspiration.

“Even though he has a frustrating disease, Grant has the best attitude, he’s always trying to make the best of the situation,” Dr. Akay said.

The Beaumont team found a way to turn the fourth annual Moonbeams for Sweet Dreams program into a virtual experienc...