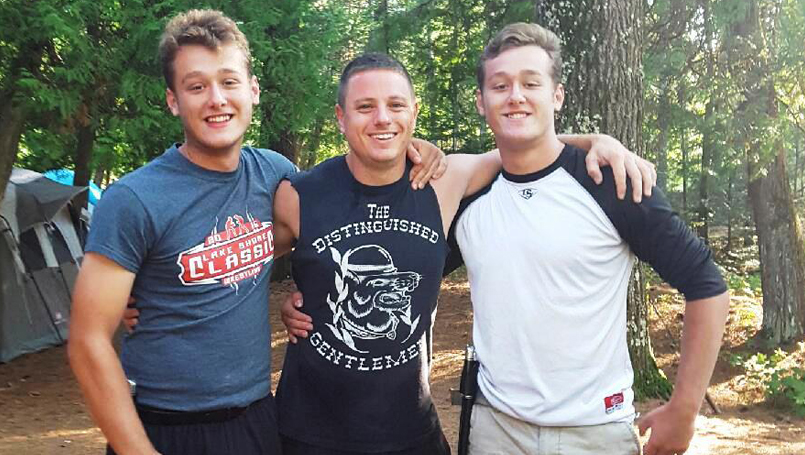 “I guess I was in the right place at the right time,” said Matthew.

The perfect summer up-north getaway - camping at a remote site in the Upper Peninsula on Lake Michigan with five of your best buddies, most of whom work with you. That’s how this story starts for Matthew Whitcomb, RN, of Westland, an emergency nurse at Beaumont Hospital, Farmington Hills.

As Matthew tried to teach his Golden-Lab dog to sit in his kayak while on the beach, he and his friends took notice of a man swimming toward them from the open water on Lake Michigan. The man yelled something like “Hey, would you let me rent your kayak for $20 because I have to rescue my sons out there.”

Matthew didn’t think twice before acting. He jumped into his kayak while the man jumped into the only other kayak Matthew’s group brought camping. Matthew quickly took the lead because the other man had just spent the past 40 minutes swimming to shore.

All alone in open water, Matthew paddled on, feeling disoriented until he heard what sounded like someone yelling. He had to stop paddling in order to figure out from what direction he heard the voice. Then, he started paddling as hard as he could in that direction until he saw what looked like a head bobbing in the choppy water.

The boys were disoriented and swimming further away from shore. Their muscles were cramping from the hour that they’d been treading water after the family’s inflated inner tube blew away from them.

There was no room in the kayak for passengers, so he told the first boy to grab and hold onto the kayak’s front handle. Then, with difficulty, Matthew paddled over to the boy’s twin brother and had him grab hold of the watercraft’s back handle.

With a physically exhausted teenager dangling from each end of the kayak, Matthew paddled them safely to shore within about 20 minutes.

“I guess I was in the right place at the right time,” said Matthew, who began working at Beaumont Hospital, Farmington Hills six years ago.

I guess I was in the right place at the right time.

All during this time, Matthew’s friends stood on the beach with no way to help except to call 9-1-1. The emergency dispatcher in that area between the towns of Gould City and Naubinway alerted the U.S. Coast Guard.

“All I could think is that the rescuers would need to be rescued along with the boys,” said Michelle Kearns, RN, who works with Matthew in the Emergency & Trauma Center at Beaumont, Farmington Hills.

Paramedics checked the boys’ vital signs. Aside from being exhausted, they were fine. Their dad was so wiped out by the ordeal, that after thanking Matthew profusely, he returned to his campsite for a 20-hour nap.

Later that day, Matthew bumped into the twins at the campground. They came over to his campsite and hung out with his group for about an hour. As a token of their deep gratitude, the boys presented Matthew with a buck knife that their grandfather had given to them when they were just 9 years old.

Matt told the boys that he appreciated their knife very much and may actually use it for its intended purpose when he goes deer hunting.

“It was a good ending though,” said Matt. “What an awesome day even if I couldn’t get my dog to sit still in the kayak!”

Matthew’s willingness to risk his own life to save those boys highlights the excellence and compassion that is part of Beaumont Health’s mission. He cares, and it shows.

The compassion and expertise of Beaumont's #healthcareheroes was shared nationally on NBC's Nightly News with Leste...

How to Tell People You Have COVID-19

Open and honest communication is key to containing the spread of coronavirus and protecting your family, friends an...

Over the next few months, Beaumont will email patients to schedule an appointment when they become eligible for the...